From Wikipedia
https://en.wikipedia.org/wiki/Portal:Baseball
Wikipedia portal for content related to Baseball

Baseball is a bat-and-ball game played between two opposing teams who take turns batting and fielding. The game proceeds when a player on the fielding team, called the pitcher, throws a ball which a player on the batting team tries to hit with a bat. The objective of the offensive team ( batting team) is to hit the ball into the field of play, allowing its players to run the bases, having them advance counter-clockwise around four bases to score what are called " runs". The objective of the defensive team ( fielding team) is to prevent batters from becoming runners, and to prevent runners' advance around the bases. A run is scored when a runner legally advances around the bases in order and touches home plate (the place where the player started as a batter). The team that scores the most runs by the end of the game is the winner.

The first objective of the batting team is to have a player reach first base safely. A player on the batting team who reaches first base without being called " out" can attempt to advance to subsequent bases as a runner, either immediately or during teammates' turns batting. The fielding team tries to prevent runs by getting batters or runners "out", which forces them out of the field of play. Both the pitcher and fielders have methods of getting the batting team's players out. The opposing teams switch back and forth between batting and fielding; the batting team's turn to bat is over once the fielding team records three outs. One turn batting for each team constitutes an inning. A game is usually composed of nine innings, and the team with the greater number of runs at the end of the game wins. If scores are tied at the end of nine innings, extra innings are usually played. Baseball has no game clock, although most games end in the ninth inning.

Baseball evolved from older bat-and-ball games already being played in England by the mid-18th century. This game was brought by immigrants to North America, where the modern version developed. By the late 19th century, baseball was widely recognized as the national sport of the United States. Baseball is popular in North America and parts of Central and South America, the Caribbean, and East Asia, particularly in Japan, South Korea and Taiwan.

In the United States and Canada, professional Major League Baseball (MLB) teams are divided into the National League (NL) and American League (AL), each with three divisions: East, West, and Central. The MLB champion is determined by playoffs that culminate in the World Series. The top level of play is similarly split in Japan between the Central and Pacific Leagues and in Cuba between the West League and East League. The World Baseball Classic, organized by the World Baseball Softball Confederation, is the major international competition of the sport and attracts the top national teams from around the world. ( Full article...)

Outline of baseball
Refresh with new selections below (purge)
edit 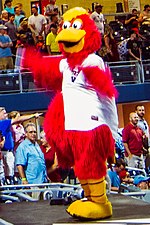 The Nashville Sounds are a Minor League Baseball team of the Pacific Coast League (PCL) and the Triple-A affiliate of the Texas Rangers. They are located in Nashville, Tennessee, and are named for the city's association with the music industry. The team plays its home games at First Tennessee Park, which opened in 2015 and is located on the site of the historic Sulphur Dell ballpark. The Sounds previously played at Herschel Greer Stadium from its opening in 1978 until the end of the 2014 season. Established as a Double-A team in 1978, the Sounds moved up to the Triple-A level in 1985. The team has served as a farm club for eight major league franchises. A total of 29  managers have led the club and its over 1,300 players. Through the 2019 season, the team has played in 6,004 regular season games and compiled a win–loss record of 3,083–2,921. The Sounds have won three league championships. Most recently, they won the PCL championship in 2005 as the Triple-A affiliate of the Milwaukee Brewers. Previous league titles won by the team are the Southern League championship in 1979 as the Double-A affiliate of the Cincinnati Reds, and again in 1982 as the Double-A affiliate of the New York Yankees. Nashville led all of Minor League Baseball in attendance in their inaugural season and continued to draw the Southern League's largest crowds in each of their seven years as members of the league. The 1980 Sounds were recognized as one of the 100 greatest minor league teams of all time. Of the three nine-inning perfect games in the history of the PCL, two have been pitched by members of the Sounds. The Sounds are the oldest active professional sports franchise in Nashville.

Orestes "Minnie" Miñoso ( /mɪˈnoʊsoʊ/, Spanish:  [miˈɲoso]; born Saturnino Orestes Armas Miñoso Arrieta; November 29, 1925 – March 1, 2015), nicknamed "The Cuban Comet" and "Mr. White Sox", was a Cuban professional baseball player. He began his baseball career in the Negro leagues in 1946 and became an All-Star third baseman with the New York Cubans. He was signed by the Cleveland Indians of Major League Baseball (MLB) after the 1948 season as baseball's color line fell. Miñoso went on to become an All-Star left fielder with the Indians and Chicago White Sox. The first Black Cuban in the major leagues and the first black player in White Sox history, as a 1951 rookie he was the one of the first Latin Americans to play in an MLB All-Star Game.

Miñoso was an American League (AL) All-Star for seven seasons and a Gold Glove winner for three seasons when he was in his 30s. He batted over .300 for eight seasons. He was the AL leader in triples and stolen bases three times each and in hits, doubles, and total bases once each. Willie Mays (179 steals) and Miñoso (167 steals) have been widely credited with leading the resurgence of speed as an offensive weapon in the 1950s. Miñoso was particularly adept at reaching base, leading the AL in times hit by pitch a record ten times, and holding the league mark for career times hit by pitch from 1959 to 1985. Miñoso, as a defensive standout, led the AL left fielders in assists six times and in putouts and double plays four times each. ( Full article...)

Also known in their early years as the "Baltimore Orioles" (1901–02) and the "New York Highlanders" (1903–12), the New York Yankees have had ten pitchers throw eleven no-hitters in franchise history. A no-hitter is officially recognized by Major League Baseball (MLB) only "when a pitcher (or pitchers) retires each batter on the opposing team during the entire course of a game, which consists of at least nine innings". No-hitters of less than nine complete innings were previously recognized by the league as official; however, several rule alterations in 1991 changed the rule to its current form. A no-hitter is rare enough that two of the thirty teams in Major League Baseball have never had a pitcher accomplish the feat. Three perfect games, a special subcategory of no-hitter, have been pitched in Yankees history. As defined by Major League Baseball, "in a perfect game, no batter reaches any base during the course of the game." This feat was achieved by Don Larsen in 1956, David Wells in 1998, and David Cone in 1999. Wells later claimed he was a "little hung-over" while throwing his perfect game.

George Mogridge threw the first no-hitter in Yankees history, beating their rival Boston Red Sox 2–1, their only no-hitter in which the opposition scored. Their most recent no-hitter was David Cone's perfect game in 1999, the seventh Yankees no-hitter thrown by a right-handed pitcher and their third perfect game. The Yankees' first perfect game was also thrown by a right-handed pitcher, Don Larsen, and came in Game 5 of the 1956 World Series. Larsen's perfect game was the only no-hitter in MLB postseason play until Roy Halladay of the Philadelphia Phillies pitched a no-hitter in Game 1 of the 2010 National League Division Series. Coincidentally, Cone's perfect game came on " Yogi Berra Day" at Yankee Stadium. Berra had caught Larsen's perfect game and both he and Larsen were in the stands for the game. Of the eleven no-hitters pitched by Yankees players, three each have been won by the scores 4–0 and 2–0, more common than any other result. The largest margin of victory in a Yankees no-hitter was 13 runs, in a 13–0 win by Monte Pearson.

The longest interval between Yankees no-hitters was between the game pitched by Larsen on October 8, 1956 and Dave Righetti's no hitter on July 4, 1983, encompassing 26 years, 8 months, and 26 days. The shortest gap between such games fell between Allie Reynolds' two no-hitters in 1951, a gap of just 2 months and 16 days from July 12 till September 28. Reynolds is the only Yankees pitcher to throw multiple no-hitters in his career, and one of only four pitchers in Major League history to throw multiple no-hitters in a season along with Nolan Ryan in 1973, Virgil Trucks in 1952, and Johnny Vander Meer in 1938. The Red Sox and the Cleveland Indians have been no-hit by the Yankees more than any other franchise, each doing so three times. Notably, Reynolds' two no-hit victims in 1951 were the Red Sox and the Indians.