Association football, more commonly known as simply football or soccer, is a team sport played with a spherical ball between two teams of 11 players. It is played by approximately 250 million players in over 200 countries and dependencies, making it the world's most popular sport. The game is played on a rectangular field called a pitch with a goal at each end. The object of the game is to outscore the opposition by moving the ball beyond the goal line into the opposing goal. The team with the higher number of goals wins the game.

Football is played in accordance with a set of rules known as the Laws of the Game. The ball is 68–70 cm (27–28 in) in circumference and known as the football. The two teams each compete to get the ball into the other team's goal (between the posts and under the bar), thereby scoring a goal. Players are not allowed to touch the ball with hands or arms while it is in play, except for the goalkeepers within the penalty area. Other players mainly use their feet to strike or pass the ball, but may also use any other part of their body except the hands and the arms. The team that has scored more goals at the end of the game is the winner; if both teams have scored an equal number of goals either a draw is declared or the game goes into extra time or a penalty shootout depending on the format of the competition. Each team is led by a captain who has only one official responsibility as mandated by the Laws of the Game: to represent their team in the coin toss prior to kick-off or penalty kicks.

Football is governed internationally by the International Federation of Association Football (FIFA; French: Fédération Internationale de Football Association), which organises World Cups for both men and women every four years. The men's FIFA World Cup has taken place every four years since 1930 with the exception of 1942 and 1946 tournaments, which were cancelled due to World War II. Approximately 190–200 national teams compete in qualifying tournaments within the scope of continental confederations for a place in the finals. The finals tournament, which is held every four years, involves 32 national teams competing over a four-week period. It is the most prestigious men's football tournament in the world as well as the most widely viewed and followed sporting event in the world, exceeding the Olympic Games. Similarly, the FIFA Women's World Cup has been played every four years since 1991 though the sport has been played by women since it has existed. A record-breaking 1.12 billion viewers watched the 2019 FIFA Women's World Cup in France. ( Full article...)

Manchester City pictured in 1904.
Manchester City Football Club is an English professional football club based in the city of Manchester. Originally formed in 1880 as "St. Marks (West Gorton)", they then became "Ardwick A.F.C." in 1887 before changing their name to Manchester City F.C. in 1894.

Manchester City entered the Football League in 1899, and won their first major honour with the FA Cup in 1904. It had its first major period of success in the late 1960s, winning the League, FA Cup and League Cup under the management of Joe Mercer and Malcolm Allison. After losing the 1981 FA Cup Final, the club went through a period of decline, which eventually saw them relegated as far down as third tier of English football by the end of the 1997–98 season. They since regained promotion to the top tier in 2001–02 and have remained a fixture in the Premier League since 2002–03. In 2008, Manchester City was purchased by Abu Dhabi United Group for £210 million and received considerable financial investment.

The club have won six domestic league titles. Under the management of Pep Guardiola they won the Premier League in 2018 becoming the only Premier League team to attain 100 points in a single season. In 2019, they won four trophies, completing an unprecedented sweep of all domestic trophies in England and becoming the first English men's team to win the domestic treble.

Manchester City's biggest rivalry is with neighbours Manchester United, against whom they contest the Manchester derby. ( Full article...) 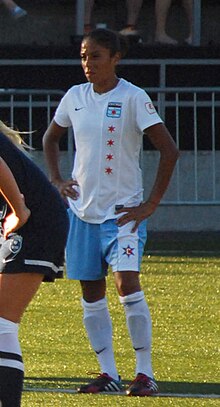 Domínguez on 25 July 2013 in Tukwila, Washington

Maribel Guadalupe Domínguez Castelán (born 18 November 1978) is a Mexican footballer who currently plays for the Chicago Red Stars in the National Women's Soccer League and is captain and leading scorer of the Mexico women's national football team. She is known internationally as "Marigol" for her record of 46 goals scored in 49 matches for the Mexican national team.

Domínguez has played professionally in the United States, Spain, and Mexico. In 2003, she was the first Mexican-born player to sign for a team in the Women's United Soccer Association (WUSA), the top division in the United States at the time. As a forward for the Atlanta Beat, she was a leading scorer in the league during its final year of operation. In 2004, she made international headlines when she signed for a men's team in Mexico but was denied by FIFA. From 2005 to 2013, she played professionally for several teams around the world including FC Barcelona, UE L'Estartit, San Diego Sunwaves, Chicago Red Stars, and UAEH Panteras.

As of 2013, Domínguez has played the most games (109) and scored the most goals (75) in the history of the women's national team. In 2004, she was ranked in FIFA's top 25 women players in the world. She holds the distinction of being the only Mexican player to have appeared and scored for the Mexican team in Olympic Games, World Cup, CONCACAF Gold Cup and Pan American Games.

The German Football Association ( German: Deutscher Fußball-Bund [ˈdɔʏtʃɐ ˈfuːsbalˌbʊnt]; DFB [ˌdeːʔɛfˈbeː]) is the governing body of football in Germany. A founding member of both FIFA and UEFA, the DFB has jurisdiction for the German football league system and is in charge of the men's and women's national teams. The DFB headquarters are in Frankfurt am Main. Sole members of the DFB are the German Football League ( German: Deutsche Fußball Liga; DFL), organising the professional Bundesliga and the 2. Bundesliga, along with five regional and 21 state associations, organising the semi-professional and amateur levels. The 21 state associations of the DFB have a combined number of more than 25,000 clubs with more than 6.8 million members, making the DFB the single largest sports federation in the world. ( Full article...)

The 2003 FIFA Women's World Cup was the fourth edition of the FIFA Women's World Cup, the quadrennial championship of women's association football teams organized by FIFA. It was held in the United States from 20 September to 12 October 2003 at six venues in six cities across the country. The tournament was won by Germany, who became the first country to win both men's and women's World Cup.

China was originally awarded the right to host the tournament, which would have taken place from 23 September to 11 October in four cities. A severe outbreak of SARS in early 2003 affected Guangdong in southern China and prompted FIFA to move the Women's World Cup to the United States, who had hosted the previous edition in 1999. China were instead granted hosting rights for the 2007 FIFA Women's World Cup and financial compensation while the United States Soccer Federation made new arrangements to host at smaller stadiums. ( Full article...)