From Wikipedia
https://en.wikipedia.org/wiki/Portal:Animation
Wikipedia portal for content related to Animation 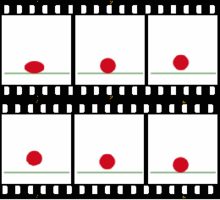 The bouncing ball animation (below) consists of these six frames.

Animation is a method in which figures are manipulated to appear as moving images. In traditional animation, images are drawn or painted by hand on transparent celluloid sheets to be photographed and exhibited on film. Today, most animations are made with computer-generated imagery (CGI). Computer animation can be very detailed 3D animation, while 2D computer animation (which may have the look of traditional animation) can be used for stylistic reasons, low bandwidth, or faster real-time renderings. Other common animation methods apply a stop motion technique to two and three-dimensional objects like paper cutouts, puppets, or clay figures.

Commonly, the effect of animation is achieved by a rapid succession of sequential images that minimally differ from each other. The illusion—as in motion pictures in general—is thought to rely on the phi phenomenon and beta movement, but the exact causes are still uncertain. Analog mechanical animation media that rely on the rapid display of sequential images include the phénakisticope, zoetrope, flip book, praxinoscope, and film. Television and video are popular electronic animation media that originally were analog and now operate digitally. For display on the computer, techniques like animated GIF and Flash animation were developed.

Outline of animation
Refresh with new selections below (purge)
edit

Eric Cartman is a fictional character on the American animated television series South Park. One of four main characters, along with Stan Marsh, Kyle Broflovski, and Kenny McCormick, he is often portrayed as the series' main anti-hero and in opposition to his friends, who commonly refer to him by his last name. He debuted on television when South Park first aired on August 13, 1997; he had earlier appeared in The Spirit of Christmas shorts created by Trey Parker and Matt Stone in 1992 (Jesus vs. Frosty) and 1995 (Jesus vs. Santa). Voiced by Trey Parker, Cartman is an overweight, immature, spoiled, lazy, foul-mouthed, mean-spirited, racist, sexist, anti-semitic, sociopathic, narcissistic, and ill-tempered third- then fourth-grader living with his mother in the fictional town of South Park, Colorado, where he routinely has extraordinary experiences not typical of conventional small-town life. Cartman is one of the most popular characters on the show, and has remained one of the most recognizable television characters ever since South Park became a hit during its first season. Parker and Stone describe the character as "a little Archie Bunker", and state that he is their favorite character, and the one with whom they most identify. During its fifteen seasons, South Park has received both praise and criticism for Cartman's tendency to be politically incorrect and shockingly profane. Prominent publications and television channels have included Cartman on their lists of the most iconic television and cartoon characters of all time.

Skeletal animation
Credit:  Sintel
Skeletal animation is a technique in computer animation in which a character is represented in two parts: a surface representation used to draw the character (called skin or mesh) and a hierarchical set of interconnected bones (called the skeleton or rig) used to animate (pose and keyframe) the mesh.
edit

Joseph Roland "Joe" Barbera (March 24, 1911 – December 18, 2006) was an influential American animator, film director, film producer, storyboard artist, and cartoon artist. Born in New York City, after working odd jobs and as a banker, Barbera joined Van Beuren Studios in 1932 and subsequently Terrytoons in 1936. He met his lifelong collaborator William Hanna while working for Metro-Goldwyn-Mayer in 1937 and soon began producing animated shorts such as the Tom and Jerry series. In 1957, after MGM dissolved their animation department, they co-founded Hanna-Barbera, which became the most successful television animation studio in the business, producing programs such as The Flintstones, The Huckleberry Hound Show, Top Cat, The Jetsons, Scooby-Doo, The Quick Draw McGraw Show, The Smurfs, Wacky Races and Yogi Bear. Hanna and Barbera won seven Academy Awards and eight Emmy Awards. Their shows, which have translations in more than 20 languages, had a global audience in the 1960s of over 300 million people.

The Simpsons' eighth season originally aired between October 1996 and May 1997, beginning on October 27, 1996 with " Treehouse of Horror VII". The showrunners for the eighth production season were Bill Oakley and Josh Weinstein. The aired season contained two episodes which were hold-over episodes from season seven, which Oakley and Weinstein also ran. It also contained two episodes for which Al Jean and Mike Reiss were the show runners. Season eight won multiple awards, including two Emmy Awards: " Homer's Phobia" won for Outstanding Animated Program (For Programming One Hour or Less) in 1997, and Alf Clausen and Ken Keeler won for "Outstanding Individual Achievement in Music and Lyrics" with the song "We Put The Spring In Springfield" from the episode " Bart After Dark". Clausen also received an Emmy nomination for "Outstanding Music Direction" for " Simpsoncalifragilisticexpiala(Annoyed Grunt)cious". " Brother from Another Series" was nominated for the Emmy for "Sound Mixing For a Comedy Series or a Special". The DVD box set was released in Region 1 on August 15, 2006, Region 2 on October 2, 2006, and Region 4 on September 27, 2006. The set was released in two different forms: a Maggie-shaped head to match the Homer and Marge shaped heads of the previous two sets and also a standard rectangular shaped box. Like the seventh season box set, both versions are separately available for sale.