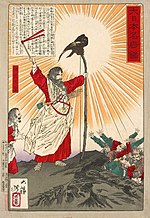 Depiction of bearded Emperor Jimmu with his emblematic long bow and an accompanying wild bird.

The first human inhabitation in the Japanese archipelago has been traced to prehistoric times around 30,000 BCE. The Jōmon period, named after its cord-marked pottery, was followed by the Yayoi people in the first millennium BCE when new inventions were introduced from Asia. During this period, the first known written reference to Japan was recorded in the Chinese Book of Han in the first century CE.

Around the 4th century BCE, the Yayoi people from the continent immigrated to the Japanese archipelago and introduced iron technology and agricultural civilization. Because they had an agricultural civilization, the population of the Yayoi began to grow rapidly and overwhelm the Jōmon people, a native of the Japanese archipelago who were hunter-gatherers.

Between the fourth to ninth century, Japan's many kingdoms and tribes gradually came to be unified under a centralized government, nominally controlled by the Emperor of Japan. The imperial dynasty established at this time continues to this day, albeit in an almost entirely ceremonial role. In 794, a new imperial capital was established at Heian-kyō (modern Kyoto), marking the beginning of the Heian period, which lasted until 1185. The Heian period is considered a golden age of classical Japanese culture. Japanese religious life from this time and onwards was a mix of native Shinto practices and Buddhism. ( Full article...)

Gifu (岐阜市, Gifu-shi) is a city located in the south-central portion of Gifu Prefecture, Japan, and serves as the prefectural capital. The city has played an important role in Japan's history because of its location in the middle of the country. During the Sengoku period, various warlords, including Oda Nobunaga, used the area as a base in an attempt to unify and control Japan. Gifu continued to flourish even after Japan's unification as both an important shukuba along the Edo period Nakasendō and, later, as one of Japan's fashion centers. It has been designated a core city by the national government.

Located on the alluvial plain of the Nagara River, Gifu has taken advantage of the surrounding natural resources to create both traditional industries (including Mino washi and agriculture) and tourism opportunities such as cormorant fishing. Mount Kinka, one of the city's major symbols, is home to a nationally designated forest and Gifu Castle, a replica of Nobunaga's former castle. Gifu also hosts many festivals and events throughout the year.

Together with Futarasan Shrine and Rinnō-ji, it forms the Shrines and Temples of Nikkō UNESCO World Heritage Site, with 42 structures of the shrine included in the nomination. Five of them are designated as National Treasures of Japan, and three more as Important Cultural Properties. ( Full article...)