Anatomy (Greek anatomē, 'dissection') is the branch of biology concerned with the study of the structure of organisms and their parts. Anatomy is a branch of natural science which deals with the structural organization of living things. It is an old science, having its beginnings in prehistoric times. Anatomy is inherently tied to developmental biology, embryology, comparative anatomy, evolutionary biology, and phylogeny, as these are the processes by which anatomy is generated, both over immediate and long-term timescales. Anatomy and physiology, which study the structure and function of organisms and their parts respectively, make a natural pair of related disciplines, and are often studied together. Human anatomy is one of the essential basic sciences that are applied in medicine.

The history of anatomy is characterized by a progressive understanding of the functions of the organs and structures of the human body. Methods have also improved dramatically, advancing from the examination of animals by dissection of carcasses and cadavers (corpses) to 20th century medical imaging techniques including X-ray, ultrasound, and magnetic resonance imaging. ( Full article...) 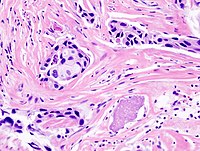 Histopathology: microscopic appearance of invasive ductal carcinoma of the breast. The slide is stained with Haematoxylin & Eosin.

Anatomical pathology (Commonwealth) or Anatomic pathology (U.S.) is a medical specialty that is concerned with the diagnosis of disease based on the macroscopic, microscopic, biochemical, immunologic and molecular examination of organs and tissues. Over the last century, surgical pathology has evolved tremendously: from historical examination of whole bodies ( autopsy) to a more modernized practice, centered on the diagnosis and prognosis of cancer to guide treatment decision-making in oncology. Its modern founder was the Italian scientist Giovan Battista Morgagni from Forlì.

The human leg, in the general word sense, is the entire lower limb of the human body, including the foot, thigh and even the hip or gluteal region. However, the definition in human anatomy refers only to the section of the lower limb extending from the knee to the ankle, also known as the crus or, especially in non-technical use, the shank. Legs are used for standing, and all forms of locomotion including recreational such as dancing, and constitute a significant portion of a person's mass. Female legs generally have greater hip anteversion and tibiofemoral angles, but shorter femur and tibial lengths than those in males. ( Full article...)

The human liver is located in the upper right abdomen

The liver is an organ only found in vertebrates which detoxifies various metabolites, synthesizes proteins and produces biochemicals necessary for digestion and growth. In humans, it is located in the right upper quadrant of the abdomen, below the diaphragm. Its other roles in metabolism include the regulation of glycogen storage, decomposition of red blood cells, and the production of hormones.

The liver is an accessory digestive organ that produces bile, an alkaline fluid containing cholesterol and bile acids, which helps the breakdown of fat. The gallbladder, a small pouch that sits just under the liver, stores bile produced by the liver which is afterwards moved to the small intestine to complete digestion. The liver's highly specialized tissue, consisting of mostly hepatocytes, regulates a wide variety of high-volume biochemical reactions, including the synthesis and breakdown of small and complex molecules, many of which are necessary for normal vital functions. Estimates regarding the organ's total number of functions vary, but textbooks generally cite it being around 500. ( Full article...)

Abū al-Qāsim Khalaf ibn al-'Abbās al-Zahrāwī al-Ansari ( Arabic: أبو القاسم خلف بن العباس الزهراوي‎;‎ 936–1013), popularly known as Al-Zahrawi (الزهراوي), Latinised as Abulcasis (from Arabic Abū al-Qāsim), was an Arab Andalusian physician, surgeon and chemist. Considered to be the greatest surgeon of the Middle Ages, he has been referred to as the "father of modern surgery".

Al-Zahrawi's principal work is the Kitab al-Tasrif, a thirty-volume encyclopedia of medical practices. The surgery chapter of this work was later translated into Latin, attaining popularity and becoming the standard textbook in Europe for the next five hundred years. Al-Zahrawi's pioneering contributions to the field of surgical procedures and instruments had an enormous impact in the East and West well into the modern period, where some of his discoveries are still applied in medicine to this day. He pioneered the use of catgut for internal stitches, and his surgical instruments are still used today to treat people. ( Full article...)

Some Wikipedians have formed a project to better organize information in articles related to Anatomy. This page and its subpages contain their suggestions; it is hoped that this project will help to focus the efforts of other Wikipedians. If you would like to help, please swing by the talk page.