From Wikipedia
https://en.wikipedia.org/wiki/Portal:Amphibians
Wikipedia portal for content related to Amphibians 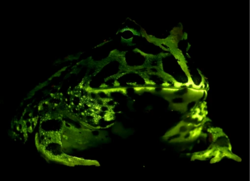 Amphibians are ectothermic, tetrapod vertebrates of the class Amphibia. All living amphibians belong to the group Lissamphibia. They inhabit a wide variety of habitats, with most species living within terrestrial, fossorial, arboreal or freshwater aquatic ecosystems. Thus amphibians typically start out as larvae living in water, but some species have developed behavioural adaptations to bypass this.

The young generally undergo metamorphosis from larva with gills to an adult air-breathing form with lungs. Amphibians use their skin as a secondary respiratory surface and some small terrestrial salamanders and frogs lack lungs and rely entirely on their skin. They are superficially similar to lizards but, along with mammals and birds, reptiles are amniotes and do not require water bodies in which to breed. With their complex reproductive needs and permeable skins, amphibians are often ecological indicators; in recent decades there has been a dramatic decline in amphibian populations for many species around the globe.

The earliest amphibians evolved in the Devonian period from sarcopterygian fish with lungs and bony-limbed fins, features that were helpful in adapting to dry land. They diversified and became dominant during the Carboniferous and Permian periods, but were later displaced by reptiles and other vertebrates. Over time, amphibians shrank in size and decreased in diversity, leaving only the modern subclass Lissamphibia. ( Full article...)

The shovelnose frogs are burrowing frogs, living most of their lives underground. The female digs underground while in amplexus, and lays her eggs in an underground cavity. The male leaves through the tunnel, and the female remains with the eggs. Once sufficient rain has fallen, the female burrows with her nose towards a water source, where the tadpoles will remain until metamorphosis. The tadpoles may remain out of water up to a few days.

Unlike most burrowing frogs, the shovelnose frogs burrow head-first, as opposed to rear-first, hence their other common names - snout-burrowers. Some species are kept as pets. ( Full article...) 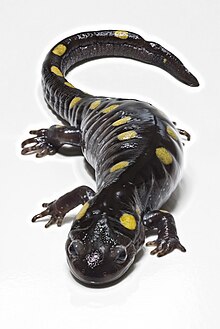 Salamanders are a group of amphibians typically characterized by a lizard-like appearance, with slender bodies, blunt snouts, short limbs projecting at right angles to the body, and the presence of a tail in both larvae and adults. All 10 present-day salamander families are grouped together under the order Urodela. Salamander diversity is highest in the Northern Hemisphere and most species are found in the Holarctic realm, with some species present in the Neotropical realm.

Salamanders rarely have more than four toes on their front legs and five on their rear legs, but some species have fewer digits and others lack hind limbs. Their permeable skin usually makes them reliant on habitats in or near water or other cool, damp places. Some salamander species are fully aquatic throughout their lives, some take to the water intermittently, and others are entirely terrestrial as adults. They are capable of regenerating lost limbs as well as other damaged parts of their bodies. Researchers hope to reverse engineer the remarkable regenerative processes for potential human medical applications, such as brain and spinal cord injury treatment or preventing harmful scarring during heart surgery recovery. Members of the family Salamandridae are mostly known as newts and lack the costal grooves along the sides of their bodies typical of other groups. The skin of some species contains the powerful poison tetrodotoxin; these salamanders tend to be slow-moving and have bright warning coloration to advertise their toxicity. Salamanders typically lay eggs in water and have aquatic larvae, but great variation occurs in their lifecycles. Some species in harsh environments reproduce while still in the larval state. ( Full article...)

Did you know? – show different entries

Oscaecilia ochrocephala
Caecilians ( /sɪˈsɪliən/; New Latin for "blind ones") are a group of limbless, vermiform or serpentine amphibians. They mostly live hidden in the ground and in stream substrates, making them the least familiar order of amphibians. All modern caecilians and their closest fossil relatives are grouped as a clade, Apoda /ˈæpədə/, within the larger group Gymnophiona, which also includes more primitive extinct caecilian-like amphibians. Caecilians are mostly distributed in the tropics of South and Central America, Africa, and southern Asia. Their diet consists of small subterranean creatures such as earthworms. ( Full article...)

Ansonia is a genus of true toads found in south India, northern Thailand, Malay Peninsula, Tioman Island, Borneo, and Mindanao ( Philippines). These small forest species spawn in streams and have torrent-adapted tadpoles. Common name stream toads has been coined for the genus, although individual species are also being referred to as slender toads.

The genus was named by Stoliczka after the governor of Penang, Colonel Edward Anson. ( Full article...)

The Western Ghats in India are home to several species of caecilians ( Gymnophiona).

Caecilians are legless, burrowing amphibians which mostly live in leaf litter, loose soil, under rocks and decaying logs. They are also found in agricultural fields and only surface during the monsoon. The body is elongated and smooth with a slimy skin. The smaller caecilians superficially resemble earthworms while the larger ones are often mistaken for snakes. However, they can be told apart from earthworms by the presence of eyes, teeth and skeleton and from snakes by the lack of scales on skin. The eyes in caecilians are not well developed which is most likely to be because of their burrowing life style. They are considered as rare which is apparently due to their subterranean habits. To see them one has to search carefully (usually by digging) and be at the right place and at the right time. There are few places where they are common, but, at least one species was reported to be abundant in agricultural fields in Kerala. The larger caecilians can resemble snakes, but their skin is smooth, not scaly. ( Full article...)

Do you have a question about Amphibians that you can't find the answer to?