From Wikipedia
https://en.wikipedia.org/wiki/Portal:Algae
Wikipedia portal for content related to Algae 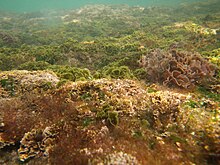 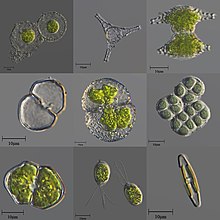 A variety of microscopic unicellular and colonial freshwater algae

Algae ( /ˈældʒi, ˈælɡi/; singular alga /ˈælɡə/) is an informal term for a large and diverse group of photosynthetic eukaryotic organisms. It is a polyphyletic grouping that includes species from multiple distinct clades. Included organisms range from unicellular microalgae, such as Chlorella, Prototheca and the diatoms, to multicellular forms, such as the giant kelp, a large brown alga which may grow up to 50 metres (160 ft) in length. Most are aquatic and autotrophic and lack many of the distinct cell and tissue types, such as stomata, xylem and phloem, which are found in land plants. The largest and most complex marine algae are called seaweeds, while the most complex freshwater forms are the Charophyta, a division of green algae which includes, for example, Spirogyra and stoneworts.

No definition of algae is generally accepted. One definition is that algae "have chlorophyll as their primary photosynthetic pigment and lack a sterile covering of cells around their reproductive cells". Likewise, the colorless Prototheca under Chlorophyta are all devoid of any chlorophyll. Although cyanobacteria are often referred to as "blue-green algae", most authorities exclude all prokaryotes from the definition of algae. Algae constitute a polyphyletic group since they do not include a common ancestor, and although their plastids seem to have a single origin, from cyanobacteria, they were acquired in different ways. Green algae are examples of algae that have primary chloroplasts derived from endosymbiotic cyanobacteria. Diatoms and brown algae are examples of algae with secondary chloroplasts derived from an endosymbiotic red alga. Algae exhibit a wide range of reproductive strategies, from simple asexual cell division to complex forms of sexual reproduction.

Algae lack the various structures that characterize land plants, such as the phyllids (leaf-like structures) of bryophytes, rhizoids in nonvascular plants, and the roots, leaves, and other organs found in tracheophytes ( vascular plants). Most are phototrophic, although some are mixotrophic, deriving energy both from photosynthesis and uptake of organic carbon either by osmotrophy, myzotrophy, or phagotrophy. Some unicellular species of green algae, many golden algae, euglenids, dinoflagellates, and other algae have become heterotrophs (also called colorless or apochlorotic algae), sometimes parasitic, relying entirely on external energy sources and have limited or no photosynthetic apparatus. Some other heterotrophic organisms, such as the apicomplexans, are also derived from cells whose ancestors possessed plastids, but are not traditionally considered as algae. Algae have photosynthetic machinery ultimately derived from cyanobacteria that produce oxygen as a by-product of photosynthesis, unlike other photosynthetic bacteria such as purple and green sulfur bacteria. Fossilized filamentous algae from the Vindhya basin have been dated back to 1.6 to 1.7 billion years ago. ( Full article...)

Microcystin-LR (MC-LR) is a toxin produced by cyanobacteria. It is the most toxic of the microcystins. ( Full article...) 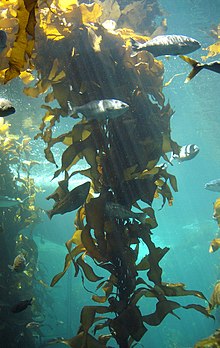 The brown algae (singular: alga), comprising the class Phaeophyceae, are a large group of multicellular algae, including many seaweeds located in colder waters within the Northern Hemisphere. Most brown algae live in marine environments, where they play an important role both as food and as a potential habitat. For instance, Macrocystis, a kelp of the order Laminariales, may reach 60 m (200 ft) in length and forms prominent underwater kelp forests. Kelp forests like these contain a high level of biodiversity. Another example is Sargassum, which creates unique floating mats of seaweed in the tropical waters of the Sargasso Sea that serve as the habitats for many species. Many brown algae, such as members of the order Fucales, commonly grow along rocky seashores. Some members of the class, such as kelps, are used by humans as food.

Between 1,500 and 2,000 species of brown algae are known worldwide. Some species, such as Ascophyllum nodosum, have become subjects of extensive research in their own right due to their commercial importance. They also have environmental significance through carbon fixation. ( Full article...)

WikiProject Algae is dedicated to focusing the efforts of Wikipedia contributors on algae-related articles. Find articles to work on on its taxon notes page.