Africa is the world's second-largest and second-most populous continent, after Asia in both cases. At about 30.3 million km2 (11.7 million square miles) including adjacent islands, it covers 6% of Earth's total surface area and 20% of its land area. With 1.3 billion people as of 2018, it accounts for about 16% of the world's human population. Africa's population is the youngest amongst all the continents; the median age in 2012 was 19.7, when the worldwide median age was 30.4. Despite a wide range of natural resources, Africa is the least wealthy continent per capita, in part due to geographic impediments, legacies of European colonization in Africa and the Cold War, undemocratic rule and deleterious policies. Despite this low concentration of wealth, recent economic expansion and the large and young population make Africa an important economic market in the broader global context.

Africa is home to much biodiversity; it is the continent with the largest number of megafauna species, as it was least affected by the extinction of the Pleistocene megafauna. However, Africa also is heavily affected by a wide range of environmental issues, including desertification, deforestation, water scarcity, and other issues. These entrenched environmental concerns are expected to worsen as climate change impacts Africa. The UN Intergovernmental Panel on Climate Change has identified Africa as the continent most vulnerable to climate change.

Africa, particularly Eastern Africa, is widely accepted as the place of origin of humans and the Hominidae clade ( great apes), meaning that Africa has a long and complex history. The earliest hominids and their ancestors have been dated to around 7 million years ago, including Sahelanthropus tchadensis, Australopithecus africanus, A. afarensis, Homo erectus, H. habilis and H. ergaster— the earliest Homo sapiens (modern human) remains, found in Ethiopia, South Africa, and Morocco, date to circa 200,000, 259,000, and 300,000 years ago respectively, and Homo sapiens is believed to have originated in Africa around 350,000–260,000 years ago. ( Full article...)

More about Africa...
For a topic outline on this subject, see List of basic Africa topics.
Refresh with new selections below (purge)

Swahili culture is the culture of the Swahili people inhabiting the Swahili coast. This littoral area encompasses Tanzania, Kenya, and Mozambique, as well as the adjacent islands of Zanzibar and Comoros and some parts of Malawi. They speak Swahili as their native language, which belongs to the Bantu language family. Graham Connah described Swahili culture as at least partially urban, mercantile, literate, and Islamic.

Swahili culture is the product of the history of the coastal part of the African Great Lakes region. As with the Swahili language, Swahili culture has a Bantu core that has borrowed from foreign influences. ( Full article...) 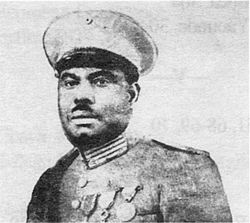 Charles Atangana (c. 1880 – 1 September 1943), also known by his birth name, Ntsama, and his German name, Karl, was the paramount chief of the Ewondo and Bane ethnic groups during much of the colonial period in Cameroon. Although from an unremarkable background, Atangana's loyalty and friendship with colonial priests and administrators secured him successively more prominent posts in the colonial government. He proved himself an intelligent and diplomatic administrator and an eager collaborator, and he was eventually named paramount chief of two Beti-Pahuin subgroups, the Ewondo and Bane peoples. His loyalty and acquiescence to the German Empire was unquestioning, and he even accompanied the Germans on their escape from Africa in World War I.

After a brief stay in Europe, Atangana returned to his homeland in Cameroon, which by then was a League of Nations mandate territory under the administration of the French Third Republic. The French doubted his loyalties at first, but Atangana served them with the same ardour he had shown the Germans and regained his post as paramount chief. During the remainder of his life, he oversaw the Westernisation of his subjects and the improvement of his domains despite the erosion of his powers due to French policies and unrest among his people. He never advocated resistance to the European powers, preferring to embrace the Europeans as a means of personal enrichment and in the service of African interests. After his death in 1943, Atangana was largely forgotten. However, since Cameroon's independence in 1960, Cameroonian scholars have rediscovered his story. ( Full article...)
edit

Liberia, officially the Republic of Liberia, is a country on the west coast of Africa, bordered by Sierra Leone, Guinea, and Côte d'Ivoire. Liberia, which means "Land of the Free", was founded as an independent nation, with support of the American government, for free-born and formerly enslaved Blacks and, thus, is one of only two nations in Africa (along with Ethiopia) that didn't fall under European domination. Since 1989, it has witnessed two civil wars, the First Liberian Civil War (1989 – 1996), and the Second Liberian Civil War (1999 – 2003), that have displaced hundreds of thousands of people and destroyed the country's economy.

The population of over 3 million comprises 16 indigenous ethnic groups and various foreign minorities. Indigenous peoples comprise about 95% of the population, the largest of which are the Kpelle in central and western Liberia. Americo-Liberians, who are descendants of freed slaves that arrived after 1821, make up an estimated 5% of the population. As of 2006, Liberia has the highest population growth rate in the world (4.91%). ( Read more...)

Nairobi ( /naɪˈroʊbi/) is the capital and the largest city of Kenya. The name comes from the Maasai phrase Enkare Nairobi, which translates to "cool water", a reference to the Nairobi River which flows through the city. The city proper had a population of 4,397,073 in the 2019 census, while the metropolitan area has a population of 9,354,580. The city is popularly referred to as the Green City in the Sun.

Nairobi was founded in 1899 by the colonial authorities in British East Africa, as a rail depot on the Uganda Railway. The town quickly grew to replace Mombasa as the capital of Kenya in 1907. After independence in 1963, Nairobi became the capital of the Republic of Kenya. During Kenya's colonial period, the city became a centre for the colony's coffee, tea and sisal industry. The city lies in the south central part of Kenya, at an elevation of 1,795 metres (5,889 ft). ( Full article...)
edit

18 June 2021 – Kidnapping in Nigeria
A kidnapped female student is found dead as the Nigerian Army rescues five other students and two teachers who were kidnapped on Thursday from a school in Kebbi State. (Reuters via SwissInfo)
18 June 2021 – COVID-19 pandemic
COVID-19 pandemic in Papua New Guinea
Papua New Guinea receives 146,000 doses of the Oxford-AstraZeneca COVID-19 vaccine from New Zealand, facilitated through the COVAX initiative. (RNZ)
COVID-19 pandemic in Uganda
President Yoweri Museveni announces that the country has imposed new restrictions to combat the spread of COVID-19, including a ban on vehicular movements except for essential workers. (Reuters)
18 June 2021 – First Liberian Civil War
A federal court in Switzerland sentences Alieu Kosiah of the ULIMO rebel group to 20 years in prison for acts of rape, killings and cannibalism. He had been arrested in Switzerland in 2014. (Reuters)

The following are images from various Africa-related articles on Wikipedia.
edit