From Wikipedia
https://en.wikipedia.org/wiki/Polarization_identity
Formula relating the norm and the inner product in a inner product space
This article is about quadratic forms. For formulas for higher-degree polynomials, see Polarization of an algebraic form. 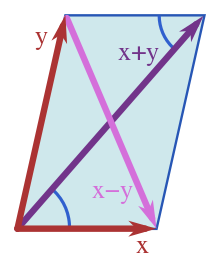 Vectors involved in the polarization identity.

The polarization identities reverse this relationship, recovering the inner product from the norm.

If the vector space is over the real numbers, then expanding out the squares of binomials reveals

These various forms are all equivalent by the parallelogram law:

For vector spaces over the complex numbers, the above formulas are not quite correct because they do not describe the imaginary part of the (complex) inner product. However, an analogous expression does ensure that both real and imaginary parts are retained. The complex part of the inner product depends on whether it is antilinear in the first or the second argument. The notation

which is commonly used in mathematics, will be assumed to be antilinear its the second argument. They are related by the formula:

The real part of any inner product (no matter which argument is antilinear and no matter if it is real or complex) is a symmetric bilinear map that is always equal to:

hold for all vectors

For the inner product

which is antilinear in the first argument, for any

The formula for the inner product

which is antilinear in the second argument, follows from that of

This expression can be phrased symmetrically as: [3]

In a normed space

if the parallelogram law

holds, then there is an inner product on

is a complex Hilbert space then

is real if and only if its complex part is

which happens if and only if

is (purely) imaginary if and only if

it can be concluded that

is real and that

is a linear isometry between two Hilbert spaces (so

is instead an antilinear isometry then

Relation to the law of cosines

The second form of the polarization identity can be written as

is the angle between the vectors

The polarization identities are not restricted to inner products. If

is any symmetric bilinear form on a vector space, and

is the quadratic form defined by

by a homogeneous polynomial of degree

The formulas above even apply in the case where the field of scalars has characteristic two, though the left-hand sides are all zero in this case. Consequently, in characteristic two there is no formula for a symmetric bilinear form in terms of a quadratic form, and they are in fact distinct notions, a fact which has important consequences in L-theory; for brevity, in this context "symmetric bilinear forms" are often referred to as "symmetric forms".

These formulas also apply to bilinear forms on modules over a commutative ring, though again one can only solve for

if 2 is invertible in the ring, and otherwise these are distinct notions. For example, over the integers, one distinguishes integral quadratic forms from integral symmetric forms, which are a narrower notion.

More generally, in the presence of a ring involution or where 2 is not invertible, one distinguishes