From Wikipedia
https://en.wikipedia.org/wiki/Player_character
Character controlled by a game player 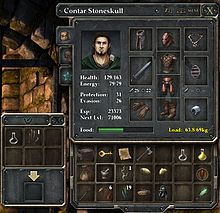 A player character named "Contar Stoneskull" in Legend of Grimrock. The squares contain icons representing items he is wearing and items he is carrying on his adventure. Statistics such as his health and experience are also listed.

The player-controlled character of Madeline (left) talks to a non-player character outside a building in the game Celeste.

A player character may sometimes be based on a real person, especially in sports games that use the names and likenesses of real athletes. Historical figures and leaders may sometimes appear as characters too, particularly in strategy or empire building games such as in Sid Meier's Civilization series. Such a player character is more properly an avatar as the player character's name and image typically have little bearing on the game itself. Avatars are also commonly seen in casino game simulations.

In many video games, and especially first-person shooters, the player character is a "blank slate" without any notable characteristics or even backstory. Pac-Man, Crono, Link, and Chell are examples of such characters. These characters are generally silent protagonists.

Some games will go even further, never showing or naming the player-character at all. This is somewhat common in first-person videogames, such as in Myst, but is more often done in strategy video games such as Dune 2000, Emperor: Battle for Dune, and Command & Conquer series. In such games, the only real indication that the player has a character (instead of an omnipresent status), is from the cutscenes during which the character is being given a mission briefing or debriefing; the player is usually addressed as "general", "commander", or another military rank.

In gaming culture, such a character was called Ageless, Faceless, Gender-Neutral, Culturally Ambiguous Adventure Person, abbreviated as AFGNCAAP; a term that originated in Zork: Grand Inquisitor where it is used satirically to refer to the player. [4]

Character action games (also called "character-driven" games, "character games" or just "action games") are a broad category of action games, referring to a variety of games that are driven by the physical actions of player characters. The term dates back to the golden age of arcade video games in the early 1980s, when the terms "action games" and "character games" began being used to distinguish a new emerging genre of character-driven action games from the space shoot 'em ups that had previously dominated the arcades in the late 1970s. Classic examples of character action games from that period include maze games like Pac-Man, platformers like Donkey Kong, and Frogger. [5] [6]

"Character action games" is also a term used for 3D hack and slash games modelled after Devil May Cry, which represent an evolution of arcade character action games. Other examples of this sub-genre include Ninja Gaiden, God of War, and Bayonetta. [10]

Fighting games typically have a larger number of player characters to choose from, with some basic moves available to all or most characters and some unique moves only available to one or a few characters. Having many distinctive characters to play as and against, all possessing different moves and abilities, is necessary to create a larger gameplay variety in such games.

Similarly to MOBAs, hero shooters emphasize pre-designed "hero" characters with distinctive abilities and weapons that are not available to the other characters. [11] Hero shooters strongly encourage teamwork between players on a team, guiding players to select effective combinations of hero characters and coordinate the use of hero abilities during a match. [12]

Multiplayer online battle arena (MOBA) games offer a large group of viable player characters for the player to choose from, each of which having distinctive abilities, strengths, and weaknesses to make the game play style different. Characters can learn new abilities or augment existing ones over the course of a match by collecting experience points. Choosing a character who complements player's teammates and counters his opponents, opens up a strategy before the beginning of the match itself. [13] Playable characters blend a variety of fantasy tropes, featuring numerous references to popular culture and mythology. [14] [15] [16]

In both tabletop role playing games such as Dungeons & Dragons and role-playing video games such as Final Fantasy, a player typically creates or takes on the identity of a character that may have nothing in common with the player. The character is often of a certain (usually fictional) race and class (such as zombie, berserker, rifleman, elf, or cleric), each with strengths and weaknesses. The attributes of the characters (such as magic and fighting ability) are given as numerical values which can be increased as the gamer progresses and gains rank and experience points through accomplishing goals or fighting enemies.