From Wikipedia
https://en.wikipedia.org/wiki/Plasma_globe
Not to be confused with Plasma lamp. 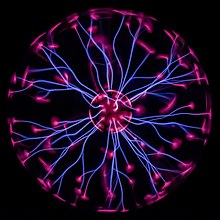 A plasma globe or plasma lamp (also called plasma ball, dome, sphere, tube or orb, depending on shape) is a clear glass container/ball filled with a mixture of various noble gases with a high-voltage electrode in the center of the container.

When voltage is applied, a plasma is formed within the container. Plasma filaments extend from the inner electrode to the outer glass insulator, giving the appearance of multiple constant beams of colored light (see corona discharge and electric glow discharge). Plasma globes were most popular as novelty items in the 1980s. [1]

The plasma lamp was invented by Nikola Tesla, during his experimentation with high-frequency currents in an evacuated glass tube for the purpose of studying high voltage phenomena. [2] Tesla called his invention an " inert gas discharge tube". [3] The modern plasma lamp design was subsequently developed by James Falk and MIT student Bill Parker. [1] 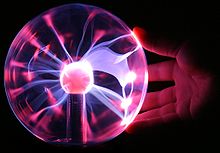 Although many variations exist, a plasma lamp is usually a clear glass sphere filled with a mixture of various gases (most commonly neon, sometimes with other noble gases such as argon, xenon and krypton) at nearly atmospheric pressure. A crackle tube is a related device filled with phosphor-coated beads. Plasma lamps are driven by high-frequency (approximately 35 kHz) alternating current at 2–5 kV. [1] The drive circuit is essentially a specialized power inverter, in which current from a lower-voltage DC supply powers a high-frequency electronic oscillator circuit whose output is stepped up by a high-frequency, high-voltage transformer. The radio-frequency energy from the transformer is transmitted into the gas within the globe through an electrode at its center. Additionally, some designs utilize the globe as a resonant cavity, which provides positive feedback to the drive transistor through the transformer. A much smaller hollow glass orb can also serve as an electrode when it is filled with metal wool or a conducting fluid that is in communication with the transformer output. In this case, the radio-frequency energy is admitted into the larger space by capacitive coupling right through the glass. Plasma filaments extend from the inner electrode to the outer glass insulator, giving the appearance of moving tendrils of colored light within the volume of the globe (see corona discharge and electric glow discharge). If a hand is placed close to the globe it produces a faint smell of ozone, as the gas is produced by high voltage interaction with atmospheric oxygen.

Some globes have a control knob that varies the amount of power going to the center electrode. At the very lowest setting that will light or "strike" the globe, a single tendril is made. This single tendril's plasma channel engages enough space to transmit this lowest striking energy to the outside world through the glass of the globe. As the power is increased, this single channel's capacity is overwhelmed and a second channel forms, then a third, and so on. The tendrils each compete for a footprint on the inner orb as well. The energies flowing through these are all of the same polarity so they repel each other as like charges: a thin dark boundary surrounds each footprint on the inner electrode.

Placing a finger tip on the glass creates an attractive spot for the energy to flow, because the conductive human body (having non-ohmic resistance of about 1000 ohms at room temperature) is more easily polarized than the dielectric material around the electrode (i.e. the gas within the globe) providing an alternative discharge path having less resistance. Therefore, the capacity of the large conducting body to accept radio frequency energy is greater than that of the surrounding air. The energy available to the filaments of plasma within the globe will preferentially flow toward the better acceptor. This flow also causes a single filament, from the inner ball to the point of contact, to become brighter and thinner. [1] The filament is brighter because there is more current flowing through it and into the 150 pF capacity, or capacitance, presented by an object, a conducting body, the size of a human. The filament is thinner because the magnetic fields around it, augmented by the now-higher current flowing through it, causes a magnetohydrodynamic effect called self-focusing: the plasma channel's own magnetic fields create a force acting to compress the size of the plasma channel itself.

A "Tesla ball" at the NEMO science museum in Amsterdam

An electric current is produced within any conductive object near the orb. The glass acts as a dielectric in a capacitor formed between the ionized gas and the hand.

The globe is prepared by pumping out as much air as is practical. The globe is then back-filled with neon to a pressure similar to one atmosphere. If the radio-frequency power is turned on, if the globe is "struck" or "lit", now, the whole globe will glow a diffuse red. If a little argon is added, the filaments will form. If a very small amount of xenon is added, the "flowers" will bloom at the ends of the filaments.[ citation needed]

The neon available for purchase for a neon-sign shop often comes in glass flasks at the pressure of a partial vacuum. These cannot be used to fill a globe with a useful mixture. Tanks of gas, each with its specific, proper, pressure regulator and fitting, are required: one for each of the gases involved.

Of the other noble gases, radon is radioactive, helium escapes through the glass relatively quickly, and krypton is quite expensive. Other gases can be used, such as mercury vapor. Molecular gases may be dissociated by the plasma. 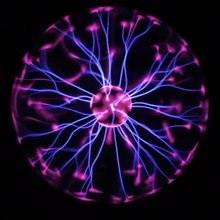 In U.S. Patent 0,514,170 ("Incandescent Electric Light", 1894 February 6), Nikola Tesla describes a plasma lamp. This patent is for one of the first high-intensity discharge lamps. Tesla used an incandescent-type lamp globe with a single internal conductive element and excited the element with high voltage currents from a Tesla coil, thus creating the brush discharge emanation. He gained patent protection on a particular form of the lamp in which a light-giving small body or button of refractory material is supported by a conductor entering a very highly exhausted globe or receiver. Tesla called this invention the single terminal lamp, or, later, the "Inert Gas Discharge Tube". [3]

The Groundstar style of plasma globe was created by James Falk and marketed to collectors and science museums in the 1970s and 1980s.[ citation needed] Jerry Pournelle in 1984 praised Orb Corporation's Omnisphere as "the most fabulous object in the entire world" and "magnificent ... a new kind of art object", stating "you can't buy mine for any price". [4]

The technology needed to formulate gas mixtures used in today's plasma spheres was not available to Tesla.[ citation needed] Modern lamps typically use combinations of xenon, krypton and neon, although other gases can be used as well. [1] [3] These gas mixtures, along with different glass shapes and integrated-circuit-driven electronics, create the vivid colors, range of motions and complex patterns seen in today's plasma spheres.

Plasma globes are mainly used as curiosities or toys for their unique lighting effects and the "tricks" that can be performed on them by users moving their hands around them. They might also form part of a school's laboratory equipment for demonstration purposes. They are not usually employed for general lighting. However, as of recent years, some novelty stores have begun selling a miniature plasma lamp nightlight that can be mounted on a standard light socket. [5] [6]

Plasma globes can be used for experimenting with high voltages. If a conductive plate or wire coil is placed on the globe, capacitive coupling can transfer enough voltage to the plate or coil to produce a small arc or energize a high voltage load. This is possible because the plasma inside the globe and the conductor outside it act as plates of a capacitor, with the glass in between as a dielectric. A step-down transformer connected between the plate and the globe's electrode can produce lower-voltage, higher-current radio frequency output. Careful earth grounding is essential to prevent injury or damage to equipment.

Bringing conductive materials or electronic devices close to a plasma globe may cause the glass to become hot. The high voltage radio frequency energy coupled to them from within the globe may cause a mild electric shock to the person touching, even through a protective glass casing. The radio frequency field produced by plasma lamps can interfere with the operation of touch-pads used on laptop computers, digital audio players, cell phones, and other similar devices. [1] Some types of plasma globes can radiate sufficient radio frequency interference (RFI) to interfere with cordless telephones and Wi-Fi devices several feet or some meters away.

If an electrical conductor touches the outside of the globe, capacitive coupling can induce enough potential on it to produce a small arc. This is possible because the globe's glass acts as a capacitor dielectric: the inside of the lamp acts as one plate, and the conductive object on the outside acts as the opposite capacitor plate. [3] This is a dangerous action which can damage the globe or other electronic devices, and presents a fire ignition hazard. [1]