From Wikipedia
(Redirected from Plant habit)
https://en.wikipedia.org/wiki/Plant_habit
This article is about "habit" and "habitus" in biology. For usage in sociology, see Habitus (sociology). 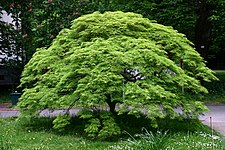 This cultivar of Japanese maple has a dome-like habit.

Habit, equivalent to habitus in some applications in biology, refers variously to aspects of behaviour or structure, as follows:

In zoology, habit (not to be confused with habitus as described below) usually refers to a specific behavior pattern, either adopted, learned, pathological, innate, or directly related to physiology. For example:

Mode of life (or lifestyle, modus vivendi) is a concept related to habit, and it is sometimes referred to as the habit of an animal. It may refer to the locomotor capabilities, as in "( motile habit", sessile, errant, sedentary), feeding behaviour and mechanisms, nutrition mode (free-living, parasitic, holozoic, saprotrophic, trophic type), type of habitat ( terrestrial, arboreal, aquatic, marine, freshwater, seawater, benthic, pelagic, nektonic, planktonic, etc.), period of activity ( diurnal, nocturnal), types of ecological interaction, etc.

The habits of plants and animals often change responding to changes in their environment. For example: if a species develops a disease or there is a drastic change of habitat or local climate, or it is removed to a different region, then the normal habits may change. Such changes may be either pathological, or adaptive. [4]

In botany, habit is the general appearance, growth form, or architecture. For example:

Plants may be woody or herbaceous. The main types of woody plants are trees, shrubs and lianas. Climbing plants ( vines) can be woody (lianas) or herbaceous (nonwoody vines). Plants can also be categorized in terms of their habit as subshrubs (dwarf shrub, bush), cushion plants and succulents. [5]

There is some overlap between the classifications of plants according to their habit and their life-form.

Other terms in biology refer similarly to various taxa; for example:

Since the distinction between the concepts – mode of behavior and morphological form – are significant in zoology, the term habitus (from which the word habit derives) is used to describe form as distinct from behaviour (habit). The term habitus also occurs in botanical texts, but there it is used almost interchangeably with habit, because plant behaviour generally does not correspond closely to the concept of habits in the zoological sense. [6]