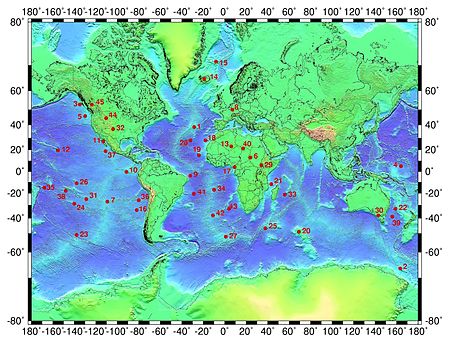 The Pitcairn hotspot is marked 31 on map.

The Pitcairn hotspot is a volcanic hotspot located in the south-central Pacific Ocean. Over the past 11 million years, it has formed the Pitcairn-Gambier hotspot chain. It is responsible for creating the Pitcairn Islands and two large seamounts named Adams and Bounty, as well as atolls at Moruroa, Fangataufa and the Gambier Islands. The hotspot is currently located at Adams and Bounty, which are ~60 kilometers East-Southeast of Pitcairn Island. [2]

The current hotspot location is west of the spreading center known as the East Pacific Rise; an area near where the Nazca plate and the Pacific plate are diverging around 20°S, 115°W. This is where material is thought to be sourced from the core-mantle boundary, rising to surface as a localized plume. [2] Opponents of the hotspot theory instead attribute Pitcairn hotspot to upwelling at the western end of the Easter Fracture Zone. [3]

Multibeam bathymetry shows that the two largest seamounts, Adams and Bounty, rise 2000m above the seafloor. Several other smaller, volcanically active seamounts exist that are shorter than 2000m in height. Bathymetry records have estimated the volume of erupted lava due to volcanic activity to be about 5900 km3 within a radius of about 110 kilometers. [4]

The larger edifices show much more extensive volcanic activity and a wider range of compositions than the smaller. The four different types of rocks that are erupted are classified as either picrite basalt, alkali basalt, trachyandesite and trachyte. [5] Areas have been observed on Bounty showing pillow basalts and giant tubular basalt to tabular/blocky trachy-andesite and trachyte flows scattered across the slope of the seamount. [4] Pyroclasts and hyaloclastites have also been observed on the main seamounts displaying a geologic history of the seamounts and past environment around them. [6]

The hotspot has formed a chain of seamounts over the past 11 million years [2] with several other large seamounts along the chain as well, organized from older to younger the further east you go. Some of these islands make up the Pitcairn Islands. They are named the Pitcairn proper, Henderson, Ducie and Oeno. The islands were first discovered by Europeans in 1767 and it is considered one of the most remote islands inhabited on earth. [7] Multibeam bathymetry and bottom imaging has shown there to be hundreds or volcanic structures in a 9500 square kilometer area around the Pitcairn Island area. East of the main island, there are several active volcanoes that are only just below the surface, less than 500 meters deep. [4]

Using methods of modeling of lead isotopes, the date set for different rocks around Pitcairn hotspot were estimated to be from 0.6 and 0.7 Ma. [8] The hotspot has four islands that have formed since the hotspot's origin.