Piphilology comprises the creation and use of mnemonic techniques to remember many digits of the mathematical constant π. The word is a play on the word "pi" itself and of the linguistic field of philology.

There are many ways to memorize π, including the use of piems (a portmanteau, formed by combining pi and poem), which are poems that represent π in a way such that the length of each word (in letters) represents a digit. [1] Here is an example of a piem: "Now I need a drink, alcoholic of course, after the heavy lectures involving quantum mechanics." Notice how the first word has three letters, the second word has one, the third has four, the fourth has one, the fifth has five, and so on. In longer examples, 10-letter words are used to represent the digit zero, and this rule is extended to handle repeated digits in so-called Pilish writing. The short story " Cadaeic Cadenza" records the first 3834 digits of π in this manner, and a 10,000-word novel, Not A Wake, has been written accordingly. [2]

However, poems prove to be inefficient for large memorizations of π. Other methods include remembering patterns in the numbers (for instance, the year 1971 appears in the first fifty digits of π) and the method of loci (which has been used to memorize π to 67,890 digits). [3] 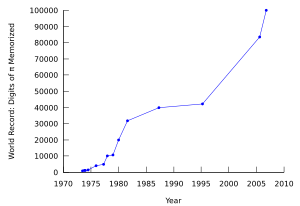 Recent decades have seen a surge in the record number of digits memorized. [4]

Until the 20th century, the number of digits of pi which mathematicians had the stamina to calculate by hand remained in the hundreds, so that memorization of all known digits at the time was possible. [5] In 1949 a computer was used to calculate π to 2000 places, presenting one of the earliest opportunities for a more difficult challenge.

The most common mnemonic technique is to memorize a so-called "piem" (a wordplay on "pi" and "poem") in which the number of letters in each word is equal to the corresponding digit of π. This famous example for 15 digits has several variations, including:

How I want a drink, alcoholic of course, after the heavy chapters involving quantum mechanics! - Sir James Hopwood Jeans [9]

Short mnemonics such as these, of course, do not take one very far down π's infinite road. Instead, they are intended more as amusing doggerel. If even less accuracy suffices, the following examples can be used:

How I wish I could recollect pi easily today!
May I have a large container of coffee, cream and sugar?

This second one gives the value of π as 3.1415926535, while the first only brings it to the second five. Indeed, many published poems use truncation instead of one of the several roundings,[ citation needed] thereby producing a less-accurate result when the first omitted digit is greater than or equal to five. It is advantageous to use truncation in memorizing if the individual intends to study more places later on, otherwise one will be remembering erroneous digits.

The point I said a blind Bulgarian in France could see

In this mnemonic the word "point" represents the decimal point itself.

Yet another example is:

How I wish I could recollect, of circle round, the exact relation Arkimedes (or Archimede) unwound.

How I wish I could enumerate pi easily, since all these bullshit mnemonics prevent recalling any of pi's sequence more simply.

Some mnemonics, such as this poem which gives the three and the first 20 decimal digits, use the separation of the poem's title and main body to represent the decimal point:

Another, more poetic version is:

Sir, I have a rhyme excelling,
In mystic power and magic spelling,
Celestial spirits elucidate,
For my own problems can't relate.

Extensions to 30 or 31 decimals of the same proceed as follows:

There are minor variations on the above rhyme, which still allow pi to be worked out correctly. However, one variation replaces the word "lexicon's" with "lesson's" and in doing so, incorrectly indicates that the 18th digit is seven.

The logologist Dmitri Borgmann gives the following 30-word poem in his book, Language on Vacation: An Olio of Orthographical Oddities: [12]

Now, a moon, a lover refulgent in flight,
Sails the black silence's loneliest ellipse.
Computers use pi, the constant, when polite,
Or gentle data for sad tracking aid at eclipse.

In the fantasy book, Somewhen by David Saul, a 35-word piem both provides a description of the constant pi and the digits. The text is also laid out as a circle to provide another clue to the readers as to the purpose of the poem. In this example, the word "nothing" is used to represent the digit zero.

It's a fact
A ratio immutable
Of circle round and width,
Produces geometry's deepest conundrum.
For as the numerals stay random,
No repeat lets out its presence,
Yet it forever stretches forth.
Nothing to eternity.

The following sonnet is a mnemonic for pi to 75 decimal places in iambic pentameter:

Put all together, get no clarity;
Mnemonics shan't describeth so reformed
Creating, with a grammercy plainly,
A sonnet liberated yet conformed.

Strangely, the queer'st rules I manipulate
Being followéd, do facilitate
Whimsical musings from geometric bard.

This poesy, unabashed as it's distressed,
Evolvéd coherent - a simple test,
Discov'ring poetry no numerals jarred.

Note that in this example, 10-letter words are used to represent the digit zero.

Other poems use sound as a mnemonic technique, as in the following poem [13] which rhymes with the first 140 decimal places of pi using a blend of assonance, slant rhyme, and perfect rhyme:

Note that "dreams number us like pi" corresponds to "314159," and so on. Sound-based mnemonic techniques, unlike pilish, do not require that the letters in each word be counted in order to recall the digits of pi. However, where sound-based mnemonics use assonance, extra care must be taken to distinguish "nine" and "five," which contain the same vowel sound. In this example, the author assumes the convention that zero is often called "O."

The piku follows the rules of conventional haiku (three lines of 5, 7 and 5 syllables), but with the added mnemonic trick that each word contains the same number of letters as the numerals of pi, e.g.

Man, I can’t - I shan’t! - formulate an anthem where the words comprise mnemonics, dreaded mnemonics for pi.

There are piphilologists who have written texts that encode hundreds or thousands of digits. This is an example of constrained writing, known as " Pilish". For example, Poe, E.: Near a Raven [17] represents 740 digits, Cadaeic Cadenza encodes 3835, and Not A Wake [18] extends to 10,000 digits.

It is also possible to use the rhythm and sound of the spoken digits themselves as a memorization device. The mathematician John Horton Conway composed the following arrangement for the first 100 digits,

where the accents indicate various kinds of repetition. [19]

Another mnemonic system used commonly in the memorization of pi is the Mnemonic major system, where single numbers are translated into basic sounds. A combination of these sounds creates a word, which can then be translated back into numbers. [20] When combined with the Method of loci, this becomes a very powerful memorization tool.

Examples in other languages

An interesting (not math themed) alternative:

How, oh this π seriously makes so many struggles to so many. Learn at least, girls, simple little verses, just such as this one should be memorizable.

The following poem composed of Alexandrins consists of words each with a number of letters that yields π to 126 decimal places: [21]

The following piem, giving π to 31 decimal places, is well known in Argentina:

Another. This piem gives π (correctly rounded) to 10 decimal places. (If you prefer to not round π, then replace "cosmos" with "cielo".)

One of the Romanian versions of Pi poems is: [22]

There is another phrase known in Romanian that will help to memorize the number by eight decimal places: Așa e bine a scrie renumitul și utilul număr. — "This is the way to write the renowned and useful number."

Another alternative for 15 decimal places:

In the Russian language, there is a well-known phrase in the reform of 1917 orthography of old tradition:

A more modern rhyme is:

A short approximation is: "Что я знаю о кругах?" (What do I know about circles?)

In addition, there are several nonfolklore verses that simply rhyme the digits of pi "as is"; for examples, see the Russian version of this article.

(Note that the dash stands for zero.)

Or in Brazilian Portuguese:

A piem written in a more poetic manner:

Japanese piphilology has countless mnemonics based on punning words with numbers. This is especially easy in Japanese because there are two or three ways to pronounce each digit, and the language has relatively few phonemes to begin with. For example, to 31 decimal places: [24]

This is close to being ungrammatical nonsense, but a loose translation prioritizing word order yields:

A person is one; the world is one:
to live this way, it's meaningless, one says, and cries,
"step on it, will ya!" then reads—be the same!
Crying uncontrollably in the dark.

Japanese children also use songs built on this principle to memorize the multiplication table.

This can be translated as:

On a mountain top a temple and a jug of wine.
Your happiness makes me so bitter;
Take some wine and drink, the wine will kill you;
If it does not kill you, I will rejoice in your happiness.

The Katapayadi System of verses is basically a system of code so that things can be defined in a way so that people can remember. The code is as follows:

With the above key in place, Sri Bharathi Krishna Tirtha in his Vedic Mathematics gives the following verse:

Even before computers calculated π, memorizing a record number of digits became an obsession for some people[ who?]. The record for memorizing digits of π, certified by Guinness World Records, is 70,000 digits, recited in India by Rajveer Meena in 9 hours and 27 minutes on 21 March 2015. [26] On October 3, 2006, Akira Haraguchi, a retired Japanese engineer, claimed to have recited 100,000 decimal places, but the claim was not verified by Guinness World Records. [27]

David Fiore was an early record holder for pi memorization. Fiore's record stood as an American record for more than 27 years, which remains the longest time period for an American recordholder. He was the first person to break the 10,000 digit mark. [28]