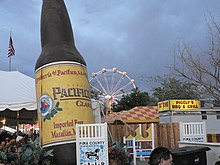 Pima County ( /ˈpiːmə/ PEE-mə) is a county in the south central region of the U.S. state of Arizona. As of the 2010 census, the population was 980,263, [1] making it Arizona's second-most populous county. The county seat is Tucson, [2] where most of the population is centered. The county is named after the Pima Native Americans who are indigenous to this area.

Pima County includes the entirety of the Tucson Metropolitan Statistical Area, and it is the third largest metropolitan area in the Southwestern United States.

Pima County, one of the four original counties in Arizona, was created by the 1st Arizona Territorial Legislature with land acquired through the Gadsden Purchase from Mexico in 1853. The original county consisted of all of Arizona Territory east of longitude 113° 20' and south of the Gila River. [3] Soon thereafter, the counties of Cochise, Graham and Santa Cruz were carved from the original Pima County. [4]

The largest ancestry groups were: [14]

Pima County is governed by a five-member Board of Supervisors who set ordinances and run services for the areas that do not fall within any city or town jurisdiction.

Board of Supervisors and elected positions

The Pima County Board of Supervisors is responsible for steering public policy in the region. The five-member board provides direction to the County Administrator and the county's various departments as they work to ensure safe communities, nurture economic development, sustainably manage natural resources and protect public health. In addition to overseeing the delivery of a host of municipal services, from roads to parks and libraries and law enforcement, board members also are responsible for approving the county budget. Elected to four-year terms, board members also set the amount of taxes to be levied.

Along with the Board of Supervisors the Arizona State Constitution allows for 7 other county elected officials.

The Pima County Sheriff's Department provides court protection, administers the county jail, provides coroner service, and patrols the unincorporated parts of Pima County. It is the seventh largest sheriff's department in the nation. [27] Incorporated towns within the county with municipal police departments are Tucson, Marana, Oro Valley, and Sahuarita.

Pima County is one of the most reliably Democratic counties in Arizona voting Democratic in every election since 1992. 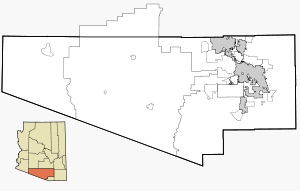 Map of the incorporated and unincorporated cities and towns in Pima County. Also shown are the borders for the Indian Reservations in the county.

Astronaut photo of the open-pit copper mines adjacent to Green Valley, 2010. Note that north is to the left.