From Wikipedia
https://en.wikipedia.org/wiki/Pierre,_South_Dakota
State capital of South Dakota in the United States

Pierre ( /pɪər/ PEER; Lakota: čhúŋkaške, lit. 'fort' [5]) is the capital city of South Dakota and the seat of Hughes County. [6] The population was 14,091 at the 2020 census, making it the second-least populous state capital in the United States, following Montpelier, Vermont. It is the eighth-most populous city in South Dakota. Founded in 1880, it was selected as the state capital when the territory was admitted as a state. Pierre is the principal city of the Pierre Micropolitan Statistical Area, which includes all of Hughes and Stanley counties.

Huron (left) and Pierre (right) issued rival maps that claimed each as the best place voters should choose for the new state capital in 1890.

The city was founded in 1880 on the east bank of the Missouri River opposite Fort Pierre, a former trading post that developed as a community. Pierre was designated as the state capital when South Dakota gained statehood on November 2, 1889.

Huron challenged the city to be selected as the capital, but Pierre was selected because of its location in the geographic center of the state. Fort Pierre had developed earlier, with a permanent settlement since circa 1817 around a fur trading post. Fort Pierre Chouteau, preceding the city, was named after Pierre Chouteau, Jr., a major American fur trader from St. Louis, Missouri, who was of colonial French origin.

Development of Pierre was also influenced by construction of the Rapid City, Pierre and Eastern Railroad, which runs east–west through the city. It increased access to markets for regional products and improved transportation for passengers. The railroad crosses the Missouri River on the Chicago and North Western Railroad Bridge.

But the capital city became relatively isolated in the post- World War II era of federally subsidized highway construction, as travelers and freight companies began to use automobiles and trucking. It is one of four state capitals that is not served by an interstate highway, and it is unique among them in not having access to an expressway. Railways still serve in the Plains States, however.

Pierre is sited on rough river bluffs above the east bank of the Missouri River, overlooking its expanse. It is a few miles away from Lake Oahe, one of the largest man-made lakes in the world. Developed for flood control and irrigation, the lake has become a popular fishing destination.

Pierre has a relatively dry, four-season, humid continental climate ( Köppen: Dfa), [9] with long, dry, cold winters, hot summers, and brief spring and autumnal transitions; as with much of the southern half of the state, it lies in USDA Plant Hardiness zone 5. [10] According to weather maps and their data used as a basis, Pierre can be considered a cool semi-arid climate ( Köppen: BSk) aided by its precipitation near the threshold [11] that reaches even northeast of the city in South Dakota. As such, it is the only capital of the Midwest's states with a non-humid climate. [12] [13] The monthly daily average temperature ranges from 19.1 °F (−7.2 °C) in January to 74.9 °F (23.8 °C), though the diurnal temperature variation is significantly greater during summer than in winter. [14] Snow primarily falls in light amounts, with the snowiest months being February and March, while the average seasonal total is 37.2 inches (0.94 m). [14] In addition, there are an average 20.9 nights per year with lows below 0 °F (−17.8 °C), [14] and cold conditions are often intensified by the high winds of the Great Plains. Summers often see spikes in temperature, with 6.6 days of highs above 100 °F (37.8 °C) and 37–38 days with highs above 90 °F (32.2 °C). [14] 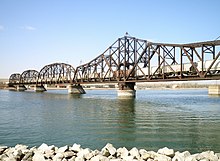 Looking west at railroad bridge over the Missouri River, from Pierre, South Dakota

There were 5,778 households, of which 29.2% had children under the age of 18 living with them, 45.7% were married couples living together, 10.4% had a female householder with no husband present, 3.8% had a male householder with no wife present, and 40.1% were non-families. 35.0% of all households were made up of individuals, and 11% had someone living alone who was 65 years of age or older. The average household size was 2.23 and the average family size was 2.87. 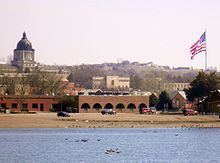 The Rapid City, Pierre and Eastern Railroad runs east–west through the city. The railroad crosses the Missouri River on the Chicago and North Western Railroad Bridge.

The Pierre School District oversees three elementary schools, a middle school and a high school, T. F. Riggs High School. St. Joseph, is a private Catholic elementary school. It is administered by the local parish and the Diocese of Sioux Falls. Other schools include For His Glory and the Pierre Indian Learning Center(a tribal school affiliated with the Bureau of Indian Education).

The Capital Journal is the local newspaper and has been in circulation since 1881. OaheTV is the local Public/Education/Government cable channel serving Pierre, Fort Pierre on Midcontinent Communications Cable.

In 2015, in honor of the 80th anniversary of the " Monopoly" board game, Hasbro held an online vote to determine which cities should be included in an updated version of the "Here and Now: The US Edition" of the game. The top "Boardwalk" spot went to an unexpected contender: Pierre. It received the most votes, beating New York, Los Angeles, Chicago, and Boston. [24] [25] The outcome may have been influenced by the image that accompanied the name of the city in the balloting: the well-known Mount Rushmore. But the sculpture is 150 miles west of Pierre, in Keystone and the Black Hills section of the state. [26]

Pierre's attractions include the Oahe Dam and its associated lake, popular for recreation such as fishing.