Photography in China dates back to the early 19th century with the arrival of European photographers in Macao. In the 1850s, western photographers set up studios in the coastal port cities, but soon their Chinese assistants and local competition spread to all regions.

By the end of the nineteenth century, all major cities had photographic studios where middle-class Chinese could have portraits taken for family occasions. Western and Chinese photographers documented ordinary street life, major wars, and prominent figures. Affluent Chinese adopted photography as a hobby. Empress Dowager Cixi had her portrait taken repeatedly. In the twentieth century, photography in China—as in other countries around the world—was used for recreation, record keeping, newspaper and magazine journalism, political propaganda, and fine-art photography.

According to the scholar Meccarelli, Chinese photography is the result of several factors. These include the study of optics (invention of camera obscura), the development of modern chemistry (photosensitive substances), the diffusion and settlement of Western medicine (especially anatomy), the presence of Westerners and missionaries (know-how and use of the photographic tool) [1] Photographers were interested not only in recording what they saw, but also in using new techniques to express traditional aesthetics and poetics. [2] 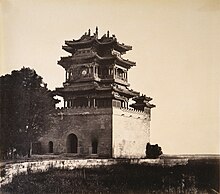 Wenchang Pavilion (文昌阁) of the Summer Palace (Yihe Yuan), before being burnt down. Photograph by Felice Beato, October 1860. 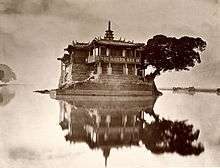 Island Pagoda (金山寺), about 1871, from the album, Foochow and the River Min 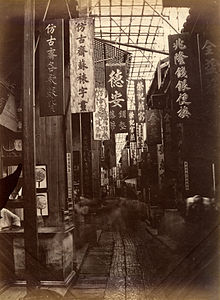 In the second half of the 19th century, some Chinese photo studios were establied, such as Kung Tai (公泰照相樓) [3] and Sze Yuen Ming (上洋耀華照相) in Shanghai, and Pun Lun (繽綸) and Lai Afong (赖阿芳) in Hong Kong.

Pioneers of photography in China

The first half of the 20th century

In the early years of the People's Republic, the state organized artists and writers into official groups that directed their work and provided them with steady salaries. Accordingly, many were assigned to photographers of Mao and high Party members. Among these were Hou Bo, Lu Houmin, and Xu Xiaobing.

Photography in China was seen as a Socialist Realist propagandist tool. Li Zhensheng was one of the few photographers who managed to take pictures in an honest way during the Cultural Revolution. Subjects of his Cultural Revolution photographs included "negative" scenes such public humiliation, street violence, executions, etc., as well as "positive" moments, like people studying Mao's works, singing revolutionary slogans, performing loyalty dance, and participating in farm work, etc. Li's photographs of the Cultural Revolution are published in a book titled "Red-Color News Soldier" by Phaidon.

The April Fifth Movement in 1976 marked the start of a new photographic vision in China. During the movement, ordinary citizens (amateur photographers) picked up the cameras and documented people's public mourning for Chinese Premier Zhou Enlai in Tiananmen Square in Beijing. A couple of years later, some of these photographs were published in a book called "People's Mourning". Many of these amateur photographers became professional ones and joined the official press. They also found an unofficial photo club called "April Photo Society."

The aftermath of the Cultural Revolution led to a documentary photography movement that rapidly grew in strength. Many photojournalists worked for the state, and therefore they do not own their copyright in their work.

The establishment in 1993 of the East Village area of the capital Beijing, established an artistic coterie that used photography as an adjunct to experimental performance art and conceptual art. In 1994, Rong Rong co-founded the first Chinese conceptual art photography magazine, New Photo.

Many artist-photographers have had success, especially in the west. Although their work has not been as explicitly political as that by very similar conceptual artists in the west, it has used the same repertoire of 'shock'; nakedness, swear words, dead babies and elephant dung, among other items that have now become tired clichés. Some photographers also work in 'Chinese kitsch' – sometimes called "Mao goes Pop" – a collage style very similar to western pop art of the 1960s. Presently, we are reminded of the discursive autonomy contemporary Chinese art is increasingly afforded, seen in works by artists such as Xu Zhen, Xing Danwen, and Zhang Yue – artists who can not be easily summarized under the umbrella of a single artistic praxis such as "kitsch" or "pop" or "shock."