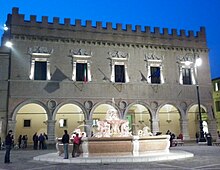 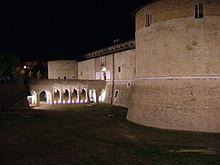 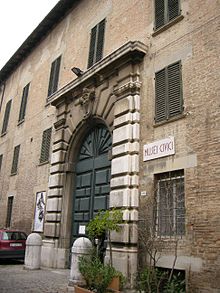 listen)) is a city and comune in the Italian region of Marche, capital of the Province of Pesaro e Urbino, on the Adriatic Sea. According to the 2011 census, its population was 95,011, making it the second most populous city in the Marche, after Ancona. Pesaro was dubbed "Cycling City" (Città della Bicicletta) by Italian environmentalist association Legambiente in recognition of its extensive network of bicycle paths and promotion of cycling. It is also known as "City of Music" as it is the birthplace of the composer Gioacchino Rossini. In 2015 the Italian Government applied for Pesaro to be declared a "Creative City" in UNESCO's World Heritage sites. In 2017 Pesaro received the European City of Sport award together with Aosta, Cagliari and Vicenza.

In 2020 it absorbed the former comune of Monteciccardo, now a frazione of Pesaro.

The city was founded as Pisaurum [3] by the Romans in 184 BC as a colony in the territory of the Picentes, the people who lived on the northeast coast during the Iron Age. However, in 1737, 13 ancient votive stones were unearthed in a local farm field, each bearing the inscription of a Roman god; these were written in a pre- Etruscan script, indicating a much earlier occupation of the area [4] than the 184 BC Picentes colony.

A settlement of the Picentes tribe has been found at Novilara. The northern Picentes were invaded in the 4th century BC by the Gallic Senones, earlier by the Etruscans, and when the Romans reached the area the population was an ethnic mixture. Within it the Gauls at least were still distinct, as the Romans separated them out and expelled them from the country.

Under the Roman administration Pesaro, a hub across the Via Flaminia, became an important center of trading and craftmanship. After the fall of the Western Empire, Pesaro was occupied by the Ostrogoths, and destroyed by Vitigis (539) in the course of the Gothic War. Hastily rebuilt five years later after the Byzantine reconquest, it formed the so-called Pentapolis, part of the Exarchate of Ravenna. After the Lombard and Frankish conquests of that city, Pesaro became part of the Papal States.

During the Renaissance it was ruled successively by the houses of Montefeltro (1285–1445), Sforza (1445–1512) and Della Rovere (1513–1631). Under the last family, who selected it as capital of their duchy, Pesaro saw its most flourishing age, with the construction of numerous public and private palaces, and the erection of a new line of walls (the Mura Roveresche). In 1475, a legendary wedding took place in Pesaro, when Costanzo Sforza and Camilla d'Aragona married. [5]

On 11 September 1860 Piedmontese troops entered the city, and Pesaro was subsequently annexed to the new Kingdom of Italy (see also Battle of Castelfidardo).

Churches and other religious buildings