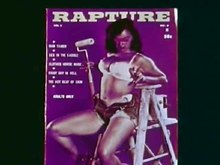 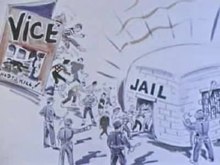 Perversion for Profit is a 1965 Eastmancolor propaganda film financed by Charles Keating through Citizens for Decent Literature and narrated by news reporter George Putnam. The film argues that sexually explicit materials corrupt young viewers and readers, leading to acts of violence and "perverted" attitudes regarding sex—including inclination toward homosexuality. Although Perversion for Profit was serious in its suggestion that pornography could erode the integrity of American culture, Peter L. Stein of the San Francisco Chronicle wrote in a 2003 review that it was "shrill and sometimes comical". [1]

Today, Perversion for Profit is in the public domain[ citation needed], and it has become popular on the Prelinger Archives website and on YouTube. As Peter L. Stein observes in an article for the San Francisco Chronicle, however, the film also has considerable historical significance, serving as a sort of time capsule of pornography from the era as well as an example of historical concerns regarding media influence:

... as the parade of girlie magazine covers, men's physique pictorials and campy S&M leaflets continues, the film betrays a kind of prurience the filmmakers could hardly have intended. What results is a remarkable visual record of midcentury underground literature and sexual appetites, and a gloss on the values of the society that condemned them. [1]

At the time the Chronicle article was written, Perversion was the Prelinger Archive's second most popular download, superseded only by the well-known Cold War film Duck and Cover. Like Stein, ephemeral film scholar Rick Prelinger, founder of the Archive, views such films as illuminating historical documents or what he calls "unofficial evidence of everyday life". [1]

In 1965, Putnam narrated Perversion for Profit, in which he warned viewers about magazines containing nudity and homosexual material, saying gay people were "perverted" and "misfits", [2] as well as implying they were child molesters, and that they weakened U.S. "resistance to the Communist masters of deceit." [2] The film was financed by Charles Keating. [1]

Putnam erroneously cites the Supreme Court as having declared adult publications, "Dirt for dirt's sake." In actuality, that quote was from New York Court of Appeals judge John F. Scileppi and was in reference to Henry Miller's Tropic of Cancer.

To support his position, Putnam refers to " Dr. [Pitirim] Sorokin, the renowned Harvard sociologist," a Russian-American who founded Harvard's Sociology department and served as the American Sociological Association's 55th president. [3]

... was undertaken at a time when I was saddled with a huge debt, at the age of 26, for a splendid house that I had bought. There would have been no way to pay the house off by writing science fiction in that long-ago era, when $2500 was a lot to earn from a novel that might take months to write, so I turned out a slew of quick sex novels. I never concealed the fact that I was doing them; it made no difference at all to me whether people knew or not. It was just a job. And it was, incidentally, a job that I did very well. I think they were outstanding erotic novels. [5]

This moral decay weakens our resistance to the onslaught of the Communist masters of deceit.

Now, you might ask yourself 'Why this sudden concern? Pornography and sex deviation have always been with mankind.' This is true. But, now, consider another fact: never in the history of the world have the merchants of obscenity, the teachers of unnatural sex acts, had available to them the modern facilities for disseminating this filth. High-speed presses, rapid transportation, mass distribution: all have combined to put the vilest obscenity within reach of every man, woman, and child in the country.

This same type of rot and decay caused sixteen of the nineteen major civilizations to vanish from the Earth. Magnificent Egypt, classical Greece, imperial Rome, all crumbled away not because of the strength of the aggressor, but because of moral decay from within. But we are in a unique position to cure our own ills: our Constitution was written by men who put their trust in God and founded a government based in His laws. These laws are on our side. We have a constitutional guarantee of protection against obscenity. And, in this day especially, we must seek to deliver ourselves from this twisting, torturing evil. We must save our nation from decay and deliver our children from the horrors of perversion. We must make our land, 'the land of the free', a safe home. Oh, God, deliver us, Americans, from evil.