A historical drama (also period drama, costume drama, and period piece) is a work set in a past time period, usually used in the context of film and television. Historical drama includes historical fiction and romances, adventure films, and swashbucklers. A period piece may be set in a vague or general era such as the Middle Ages or a specific period such as the Roaring Twenties.

Films set in historical times have always been some of the most popular works. D. W. Griffith's The Birth of a Nation and Buster Keaton's The General are examples of popular early American works set during the U.S. Civil War. In different eras different subgenres have risen to popularity such as the westerns and sword and sandal films that dominated North American cinema in the 1950s. The costume drama is often separated as a genre of historical dramas. Early critics defined them as films focusing on romance and relationships in sumptuous surroundings, constrasting them with other historical dramas believed to have more serious themes. Other critics have defended costume dramas, and argued that they are disparaged because they are a genre directed towards women. [1] Historical dramas have also been described as a conservative genre, glorifying an imagined past that never existed. [2] 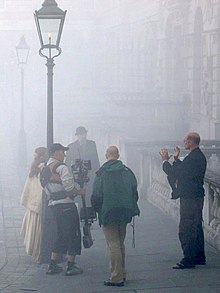 2004 filming of a 19th-century film scene set in London

While historical drama is fiction, works may include references to real-life people or events from the relevant time period or contain factually accurate representations of the time period. Works may also include mostly-fictionalized narratives based on actual people or events, such as Braveheart, Les Misérables, and Titanic. [3]

Works that focus on accurately portraying specific historical events or persons are instead known as docudrama (such as The Report). Where a person's life is central to the story, such a work is known as biographical drama (examples being Frida, Cinderella Man and Lincoln).