From Wikipedia
https://en.wikipedia.org/wiki/Perennial_stream
type of river 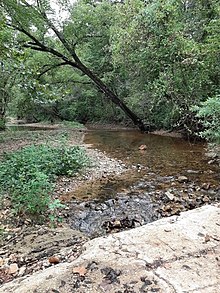 The Gangi River of Arrah, India

A perennial stream or perennial river is a stream or river (channel) which has constant stream throughout the year through parts of its stream bed during years of normal rainfall. [1] In the absence of irregular, prolonged, or extreme drought, a perennial stream is a watercourse, or segment, element, or emerging body of water which continually delivers groundwater. For example, an artificial disruption of stream, variability in flow or stream selection associated with the activity in hydropower installations, shall not affect the measurement. Perennial streams do not consist of stagnant water for the wetlands, reservoirs, and ponds that occur all the period. All other streams, or portions thereof, should be considered seasonal rivers or lakes. The stream can cycle from broken to perpetual through multiple iterations, to intermittent through its mechanism. [2] [3] 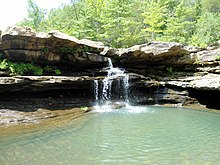 The basic concept means flowing bodies of water. In hydrology, the stream usually refers to water flowing through natural passages separated from canals.

The flow is the main component of the drainage of surface water through the bed of the river and the bank of the river. The flows are regulated by three aspects: surface water, subsurface flow, and groundwater. During the rainy seasons, surface and subsurface water differ greatly. Groundwater is reasonably stable and regulated by trends of long-term precipitation. The patterns include surface, subsurface, and groundwater. And these factors flow into geological, geomorphological, hydrological, and biological controls. [1]

The following can be listed as streams in natural channels :

According to the time:

According to the water underneath:

Streams, headwaters, and streams flowing only part of the year provide many benefits upstream and downstream. They defend against floods, remove contaminants, recycle nutrients that are potentially dangerous as well as provide food and habitat for many forms of fish. Such streams also play a vital role in preserving our drinking water quality and supply, ensuring a steady flow of water to surface waters and helping to restore deep aquifers.

The word "perennial" from the 1640s, meaning "evergreen," is established in Latin perennis, keeping the meaning as "everlasting all year round," per "over" plus annus "year." This has been proved since the 1670s by the "living years" in the sense of botany. The metaphorical sense of "enduring, eternal" originates from 1750. They are related to "perennial." See biennial for shifts in vowels. [6]

Perennial streams have one or more of these characteristics:

Absence of such characteristics supports classifying a stream as intermittent, "showing interruptions in time or space". [7]

The streams typically derive most of their water from rain and snow precipitation. Most of this water re-enters the atmosphere either by evaporating from soil and water bodies, or by plant evapotranspiration. By infiltration some of the water sinks into the earth and becomes groundwater, much of which eventually enters streams. Most precipitated water is partially bottled up by evaporation or freezing in snow fields and glaciers. The majority of the water flows as a runoff off the ground, the proportion of which varies depending on several factors, such as climate, temperature, vegetation, types of rock, and relief. This runoff begins as a thin layer called sheet wash, combined with a network of tiny rills, which together form the sheet runoff; when this water is focused in a channel, a stream is born. Some rivers and streams may begin from lakes or ponds.

Freshwater's primary sources are precipitation, and mountain snowmelt. However, rivers typically originate in the highlands, and are slowly created by the erosion of mountain snowmelt into lakes or rivers. Rivers usually flow from their source topographically, and erode as they pass until they reach the base stage of erosion.

The scientists have offered a way based on data to define the origin of the lake. A classified sample was the one measured by the Chinese researchers from the University of Chinese Academy of Sciences.

As an essential symbol of the river formation environment, the river source needs an objective and straightforward and effective method of judging. A calculation model of river source catchment area based on critical support flow (CSD) proposed, and the relationship between CSA and CSD with a minimum catchment area established. Using the model for comparison in two basins in Tibet (Helongqu and Niyang River White Water) in Tibet, the results show that the critical support flow (Qc) of the housing dragon song[ clarification needed] is 0.002 8 m3/s. At the same time, the white water curvature is 0.008 5 m3/s. Besides, the critical support flow can vary with hydrologic climate conditions, and the vital support flow Qc in wet areas (white water) is larger than in semi-arid regions (heap slot). The proposed critical support flow (CSD) concept and model method can be used to determine the hydrographic indicators of river sources in complex geographical areas, and it can also reflect the impact of hydrologic climate change on river recharge in different regions. [8]

The river's source is the river's point of origin. It can consist of lakes, swamps, springs, or glaciers. It is here that the stream starts. A typical river consists of several tributaries, and each arm may be made up of several other smaller tributaries, so that together this stream and all its tributaries are called a drainage network. Although the current and each branch has its source, international practice is to take the source farthest from the end as the source of the entire river system, from which the most extended length of the river measured as the starting point is taken as the length of the whole river system. [9]

Generally speaking, the source of a river system will be at the beginning of the current or its upper reaches, where the river length is synonymous with the size of the river system unless otherwise specified. For example, the origin of the Nile River is the confluence of the White Nile and the Blue Nile, and the source of the whole river system is in its upper reaches. If there is no specific designation, "Nile length" refers to "river length of the Nile system," rather than to the length of the Nile river. The Nile's source is often known as Lake Victoria, but the lake has significant feeder rivers. The Kagera River, which flows into Lake Victoria near Bukoba's Tanzanian town, is the longest feeder, though sources do not cooperate on which is the Kagera 's longest tributary and therefore the Nile's most remote source itself. [10] [11]

"Macroinvertebrate" refers to easily seen invertebrates, larger than 0.5 mm, found in stream and river bottoms. [12] Macroinvertebrates are larval stages of most aquatic insects and their presence is a good indicator the stream is perennial. Larvae of caddisflies, mayflies, stoneflies, and damselflies [13] require a continuous aquatic habitat until they reach maturity. Crayfish and other crustaceans, snails, bivalves (clams), and aquatic worms also indicate the stream is perennial. These require a persistent aquatic environment for survival. [14]

Fish and amphibians are secondary indicators when it comes to assessing for a perennial stream because some fish and amphibians can inhabit areas without persistent water regime. When assessing for fish, all available habitat should be assessed; from pools, riffles, root clumps and other obstructions. Fish will seek cover if alerted to human presence but should be easily observed in perennial streams. Amphibians also indicate a perennial stream and range from tadpoles, frogs, salamanders, and newts. These amphibians can be found in stream channels, along streambanks, and even under rocks. Frogs and tadpoles usually inhabit shallow and slow moving waters near the sides of stream banks. Frogs will typically jump into water when alerted to human presence. [14]

Well defined river beds composed of riffles, pools, runs, gravel bars, a bed armor layer, and other depositional features, plus well defined banks due to bank erosion are good identifiers when assessing for perennial streams. [15] Particle size will help identify a perennial stream. Perennial streams cut through the soil profile which removes fine and small particles. By assessing areas for relatively coarse material left behind in the stream bed and finer sediments along the side of the stream or within the floodplain will be a good indicator of persistent water regime. [13]

A perennial stream can be identified 48 hours after a storm. Direct storm runoff usually has ceased at this point. If a stream is still flowing and contributing inflow is not observed above the channel, the observed water is likely baseflow. Another perennial stream indication is an abundance of red rust material in a slow-moving wetted channel or stagnant area. This is evidence that iron-oxidizing bacteria are present, indicating persistent expression of oxygen-depleted ground water. In a forested area, leaf and needle litter in the stream channel is an additional indicator. Accumulation of leaf litter does not occur in perennial streams since such material is continuously flushed. In the adjacent overbank of a perennial stream, fine sediment may cling to riparian plant stems and tree trunks. Organic debris drift lines or piles may be found within the active overbank area after recent high flow. [13]