From Wikipedia
(Redirected from Pectoral girdle)
https://en.wikipedia.org/wiki/Pectoral_girdle
Set of bones which connects the arm to the axial skeleton on each side

The pectoral girdles are to the upper limbs as the pelvic girdle is to the lower limbs; the girdles are the parts of the appendicular skeleton that anchor the appendages to the axial skeleton.

In humans, the only true anatomical joints between the shoulder girdle and the axial skeleton are the sternoclavicular joints on each side. No anatomical joint exists between each scapula and the rib cage; instead the muscular connection or physiological joint between the two permits great mobility of the shoulder girdle compared to the compact pelvic girdle; because the upper limb is not usually involved in weight bearing, its stability has been sacrificed in exchange for greater mobility. In those species having only the scapula, no joint exists between the forelimb and the thorax, the only attachment being muscular.

The shoulder girdle is the anatomical mechanism that allows for all upper arm and shoulder movement in humans. [1] The shoulder girdle consists of five muscles that attach to the clavicle and scapula and allow for the motion of the sternoclavicular joint (connection between sternum and clavicle) and acromioclavicular joint (connection between clavicle and scapula). [2] The five muscles that comprise the function of the shoulder girdle are the trapezius muscle (upper, middle, and lower), levator scapulae muscle, rhomboid muscles (major and minor), serratus anterior muscle, and pectoralis minor muscle. [3]

The shoulder girdle is a complex of five joints that can be divided into two groups. Three of these joints are true anatomical joints while two are physiological ("false") joints. [explain 1] Within each group, the joints are mechanically linked so that both groups simultaneously contribute to the different movements of the shoulder to variable degrees. [4]: 20

The glenohumeral joint is the articulation between the head of the humerus and the glenoid cavity of the scapula. It is a ball and socket type of synovial joint with three rotatory and three translatory degree of freedom. The glenohumeral joint allows for adduction, abduction, medial and lateral rotation, flexion and extension of the arm.

The suprahumeral joint (also known as the subacromial joint) is a physiological joint formed by an articulation of the coracoacromial ligament and the head of the humerus. It is formed by the gap between the humerus and the acromion process of the scapula. This space is filled mostly by the subacromial bursa and the tendon of supraspinatus. This joint plays a role during complex movements while the arm is fully flexed at the glenohumeral joint, such as changing a lightbulb, or painting a ceiling.

The scapula can be elevated and depressed from the neutral position to a total range of 10 to 12 centimetres (3.9 to 4.7 in); at its most elevated position the scapula is always tilted so that the glenoid cavity is facing superiorly. During this tilting, the scapula rotates to a maximum angle of 60° about an axis passing perpendicularly through the bone slightly below the spine; this causes the inferior angle to move 10 to 12 centimetres (3.9 to 4.7 in) and the lateral angle 5 to 6 centimetres (2.0 to 2.4 in). [4]: 40

Shoulders are a common place for tissue injuries, especially if the person plays overhead sports such as tennis, volleyball, baseball, swimming, etc. According to Bahr's major injury related statistics, shoulder dislocations or subluxations account for 4% of injuries in adults ages 20–30 and 20% of shoulder injuries are fractures. [6] Damage to the shoulder and adjacent features can fluctuate in severity depending on the person's age, sport, position, recurring shoulder dysfunction, and many other factors. Some other common shoulder injuries are fractures to any shoulder girdle bones i.e. clavicle, ligamentous sprains such as AC joint or GH ligaments, rotator cuff injuries, different labral tears, and other acute or chronic conditions related to shoulder anatomy.

Shoulder girdle pain can be acute or chronic and be due to a number of causes. Inflammation or injury of associated tendons, bone, muscles, nerves, ligaments, and cartilage can all cause pain. Also, past injury compensation, and stress can result in complicated shoulder pain. [7]

In humans, winged scapula is a condition in which the shoulder blade protrudes from a person's back in an abnormal position. 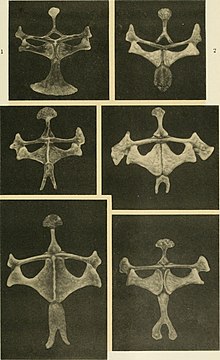 The shoulder girdle demonstrates an enormous variation in amniotes (animals adapted to a terrestrial life), both among extant species and along evolutionary lines, and determining homologies for individual pectoral elements is difficult. Except for the sternum, these elements were, however, present in early bony fishes before there were even limbs. In digitless tetrapods the cleithrum, clavicle, and interclavicle are dermal and linked to the caudal part of the head while the humerus articulates with a small scapulocoracoid bone. As the first digits appeared, the pectoral structure lost its direct connection to the head skeleton while the scapulocoracoid grew more prominent and started to face laterally. In more derived tetrapods the dermal part of the girdle was gradually reduced and the scapulocoracoid split into a dorsal scapula and a ventral coracoid. [8]

In dinosaurs the main bones of the pectoral girdle were the scapula (shoulder blade) and the coracoid, both of which directly articulated with the clavicle. The clavicle was present in saurischian dinosaurs but largely absent in ornithischian dinosaurs. The place on the scapula where it articulated with the humerus (upper bone of the forelimb) is the called the glenoid. The scapula served as the attachment site for a dinosaur's back and forelimb muscles.

Chimpanzees are far better at brachiation than humans. Their clavicles possess a cranially oriented twist on the acromial end, conducive to better force transfer through it - a very important function in arboreal locomotion. Chimpanzee scapulas also possess a considerably larger supraspinous fossa, allowing for a larger supraspinatus muscle. Through the process of evolution, humans have lost the Atlantoclavicularis muscle, originating on the atlas of the vertebral column, and inserting onto the acromial clavicle. This muscle acts to elevate the clavicle. [9]