Paul Davidson was born in Lötzen, East Prussia (modern Giżycko, Poland) the son of Moritz Davidson. He initially worked as a commercial traveller in the textile industry and became the manager of a security firm in Frankfurt am Main in 1902. On vacation to Paris he saw his first movie, a Georges Méliès film, in a cinema. [1] [2] [3] Back in Frankfurt he founded the "Allgemeine Kinematographen-Theater Gesellschaft, Union-Theater für lebende und Tonbilder GmbH" (A.K.T.G.) on 21 March 1906 and opened Mannheim’s first permanent cinema, the Union-Theater (U.T.). Further cinemas followed in Frankfurt, Düsseldorf, Cologne, Strasbourg, Amsterdam and Brussels. [1] [2]

On 4 September 1909 Davidson opened the Union-Theater at Berlin, Alexanderplatz. [4] [5] Another Union-Theater was opened at Berlin's Unter den Linden on 21 August 1910, by 1910 Davidson had built up a "sizeable chain of 600–1000 seater luxury cinemas". [6] On 2 August 1913 the Union-Palast, Kurfürstendamm, one of the first buildings of Berlin exclusively built as a movie theater, premiered with Max Reinhardt’s "Die Insel der Seligen". [6] [7] In March 1910 Davidson founded the Projektions-Aktiengesellschaft Union (PAGU), Germany’s first joint-stock company in film industry and the first to integrate production, distribution and equipment hire. [1]

Following the success of Asta Nielsen’s The Abyss he founded the Internationale Film-Vertriebs-Gesellschaft in conjunction with Nielsen and her husband Urban Gad on 1 June 1911. [8] The company held the European rights on all Nielsen films and Nielsen became a “scintillating international film star” with an annual fee of 85,000 Marks in 1914 alone. [1] [9] 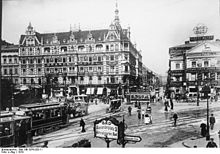 Davidson described Nielsen as the decisive factor for his move to film productions:

I had not been thinking about film production. But then I saw the first Asta Nielsen film. I realised that the age of short film was past. And above all I realised that this woman was the first artist in the medium of film. Asta Nielsen, I instantly felt could be a global success. It was International film Sales that provided Union with eight Nielsen films per year. I built her a studio in Tempelhof, and set up a big production staff around her. This woman can carry it ... Let the films cost whatever they cost. I used every available means – and devised many new ones – in order to bring the Asta Nielsen films to the world. [8] [10]

In late 1912 the PAGU moved to Berlin and opened a studio in Berlin- Tempelhof (Davidson would also play an important role in the founding of the Babelsberg studios). [11] The PAGU engaged directors like Ernst Lubitsch and Paul Wegener as well as actors like Asta Nielsen, Fern Andra, Pola Negri, Ossi Oswalda, Emil Jannings and Harry Liedtke. [1]

In January 1914 PAGU was merged with Jules Greenbaum’s company to form PAGU-Vitascope, however, the project, including a cooperation with the French Pathé Freres ended at the outbreak of World War I. In August 1915 Davidson sold his cinemas to the Danish Nordisk Film. [9] [12] PAGU became part of the newfounded Universum Film AG (UFA) in 1917 and Davidson worked as the UFA’s artistic director and head of production. [12] In 1920 he left the UFA to produce Lubitsch’s "Das Weib des Pharao" (The Wife of the Pharaoh) and "Die Flamme" (The Flame) within the short-living Europäische Film-Allianz (EFA). [1] [13]

When Lubitsch moved to Hollywood in 1922, Davidson had produced 39 movies directed by Lubitsch. [10] [14] From 1922 he produced pictures independently, but exclusively for the UFA. He canceled his contract early in 1927 and committed suicide on 18 July that year. [1] 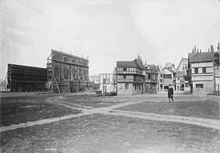 Scenery at the Tempelhof studios (1920)