From Wikipedia
https://en.wikipedia.org/wiki/Parwan_Province
Province of Afghanistan
"Parwan" redirects here. For the locality in Australia, see Parwan, Victoria.
Province in Afghanistan

The name Parwan is also attributed to a town, the exact location of which is now unknown, that supposedly existed during prehistory, in the nearby Hindu Kush mountains. [3]

Despite a four decade-long state of war in Afghanistan, Parwan was relatively free of conflict by the mid-2010s. While occasional attacks on government or international forces were reported, they were usually minor.[ citation needed] Such incidents in Parwan mostly involved grenade attacks on the residences of government officials or roadside bombs. [4] Bagram Air Base, which was one of the largest US military bases in Afghanistan, is located in Parwan.

In 329 BC, Alexander the Great founded the settlement of Parwan as his Alexandria of the Caucasus. It was conquered by Arab Muslims in 792 AD. [3] In 1221, the province was the site of the battle between the invading Mongols, led by Genghis Khan, and the Khwarezmian Empire led by Jalal ad-Din Mingburnu, where the Mongols were defeated. [3] The famous Moroccan traveler and scholar, Ibn Battuta, visiting the area in 1333 writes:

"We halted next at a place called Banj Hir ( Panjshir), which means "Five Mountains," where there was once a fine and populous city built on a great river with blue water like the sea. This country was devastated by Tinkiz, the king of the Tatars, and has not been inhabited since. We came to a mountain called Pashay, where there is a convent of the Shaykh Ata Awliya, which means "Father of the Saints." He is also called Sisad Salah, which is the Persian for "three hundred years," because they say that he is three hundred and fifty years old. They have a very high opinion of him and come to visit him from the towns and villages, and sultans and princesses visit him too. He received us with honor and made us his guests. We encamped by a river near his convent and went to see him, and when I saluted him he embraced me. His skin is fresh and smoother than any I have seen; anyone seeing him would take him to be fifty years old. He told me that he grew new hair and teeth every hundred years. I had some doubts about him, however, and God knows how much truth there is in what he says. We travelled thence to Parwan, where I met the amir Buruntayh. He treated me well and wrote to his representatives at Ghazna enjoining them to show me honour. We went on to the village of Charkh [Charikar], it being now summer, and from there to the town of Ghazna. This is the town of the famous warrior-sultan Mahmud ibn Sabuktagin, one of the greatest of rulers, who made frequent raids into India and captured cities and fortresses there." [5]

The area was subsequently ruled by the Timurids and Mughals until Ahmad Shah Durrani made it part of the Durrani Empire in 1747. In 1840, Parwan was the site of a major battle in the First Anglo-Afghan War where the invading British were defeated. [3] Parwan's modern history began with the construction of a new textile factory in the town of Jabal Saraj in 1937. [3] Parwan was involved in the Soviet–Afghan War as some of the fiercest fighting took place in the area. [6] In the 1990s it was the site of heavy resistance against the Taliban. 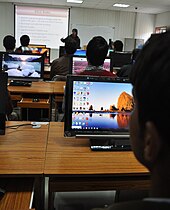 Computer class at the Korean Education and Cultural Center in Parwan.

Since the removal of the Taliban in late 2001, the United States Armed Forces took control of Bagram Air Base and began using it as one of their main bases in Afghanistan. A Provincial Reconstruction Team (PRT) led by South Korea helped the locals with development activities in the province until 2014. [7] In mid-February 2011, five rocket-propelled grenades hit the newly built South Korean military base housing the provincial reconstruction team and civilian aid workers. No one was injured in the attack, but it came hours after a visit by South Korean Defense Minister Kim Kwan-jin, raising suspicions of Taliban involvement. The opening ceremony of the base was postponed indefinitely. [8]

A plan to build a power plant in the province is under consideration. A large portion of Parwan's economy relies on remittances from the Afghan diaspora living abroad.

In July 2012, the Taliban executed a married woman in front of a large crowd after she was found guilty of adultery. [9] It was reported that the woman had a secret affair with a married military commander of the Afghan National Army. 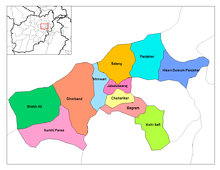 According to the Naval Postgraduate School, the ethnic groups of the province are as follows:  Tajiks,  Hazaras,  Uzbeks, Pashtuns, Kuchis and other minority groups. [11]

According to Afghanistan's Ministry of Rural Rehabilitation and Development:

Around three quarters (73%) of the population of Parwan lives in rural districts, while one quarter (27%) lives in urban areas, Around 50% of the population is male and 50% is female. Dari and Pashto are the main languages spoken in the province; however Dari speakers outnumber Pashto speakers by a ratio of 5 to 2. [2] Parwan province also has a population of Kuchis or nomads whose numbers vary in different seasons. In winter 30,290 Kuchi live in Parwan province, of which 66% are short-range migratory and the remaining 34% are long-range migratory. During the summer, Kuchi migrate to Parwan province from Laghman, Kapisa, Baghlan and to a lesser extent from Kabul, Nangarhar and Kunar. The Kuchi population in the summer is 121,517 individuals. [12]