From Wikipedia
https://en.wikipedia.org/wiki/Particle_physics_and_representation_theory
Connection between properties of elementary particles and mathematical structure of Lie groups and Lie algebras

There is a natural connection between particle physics and representation theory, as first noted in the 1930s by Eugene Wigner. [1] It links the properties of elementary particles to the structure of Lie groups and Lie algebras. According to this connection, the different quantum states of an elementary particle give rise to an irreducible representation of the Poincaré group. Moreover, the properties of the various particles, including their spectra, can be related to representations of Lie algebras, corresponding to "approximate symmetries" of the universe.

Symmetries of a quantum system

In quantum mechanics, any particular one-particle state is represented as a vector in a Hilbert space

. To help understand what types of particles can exist, it is important to classify the possibilities for

allowed by symmetries, and their properties. Let

be a Hilbert space describing a particular quantum system and let

might be the Poincaré group, while for the hydrogen atom,

might be the rotation group SO(3). The particle state is more precisely characterized by the associated projective Hilbert space

, also called ray space, since two vectors that differ by a nonzero scalar factor correspond to the same physical quantum state represented by a ray in Hilbert space, which is an equivalence class in

and, under the natural projection map

By definition of a symmetry of a quantum system, there is a group action on

, there is a corresponding transformation

is some symmetry of the system (say, rotation about the x-axis by 12°), then the corresponding transformation

is a map on ray space. For example, when rotating a stationary (zero momentum) spin-5 particle about its center,

is a rotation in 3D space (an element of

is an operator whose domain and range are each the space of possible quantum states of this particle, in this example the projective space

preserves, by definition of symmetry, the ray product on

induced by the inner product on

; according to Wigner's theorem, this transformation of

comes from a unitary or anti-unitary transformation

. Note, however, that the

associated to a given

is not unique, but only unique up to a phase factor. The composition of the operators

should, therefore, reflect the composition law in

, but only up to a phase factor:

is a projective unitary representation of

, or possibly a mixture of unitary and anti-unitary, if

is disconnected. In practice, anti-unitary operators are always associated with time-reversal symmetry.

It is important physically that in general

does not have to be an ordinary representation of

; it may not be possible to choose the phase factors in the definition of

to eliminate the phase factors in their composition law. An electron, for example, is a spin-one-half particle; its Hilbert space consists of wave functions on

with values in a two-dimensional spinor space. The action of

on the spinor space is only projective: It does not come from an ordinary representation of

. There is, however, an associated ordinary representation of the universal cover

For many interesting classes of groups

, Bargmann's theorem tells us that every projective unitary representation of

comes from an ordinary representation of the universal cover

is finite dimensional, then regardless of the group

, every projective unitary representation of

comes from an ordinary unitary representation of

is infinite dimensional, then to obtain the desired conclusion, some algebraic assumptions must be made on

The requirement referred to above is that the Lie algebra

does not admit a nontrivial one-dimensional central extension. This is the case if and only if the second cohomology group of

is trivial. In this case, it may still be true that the group admits a central extension by a discrete group. But extensions of

by discrete groups are covers of

. For instance, the universal cover

with the central subgroup

being the center of

itself, isomorphic to the fundamental group of the covered group.

Thus, in favorable cases, the quantum system will carry a unitary representation of the universal cover

of the symmetry group

. This is desirable because

is much easier to work with than the non-vector space

. If the representations of

can be classified, much more information about the possibilities and properties of

. The group of translational symmetries of the associated phase space,

, is the commutative group

. In the usual quantum mechanical picture, the

symmetry is not implement by a unitary representation of

, but it does not come from an ordinary representation of

In this case, to obtain an ordinary representation, one has to pass to the Heisenberg group, which is a nontrivial one-dimensional central extension of

The group of translations and Lorentz transformations form the Poincaré group, and this group should be a symmetry of a relativistic quantum system (neglecting general relativity effects, or in other words, in flat space). Representations of the Poincaré group are in many cases characterized by a nonnegative mass and a half-integer spin (see Wigner's classification); this can be thought of as the reason that particles have quantized spin. (Note that there are in fact other possible representations, such as tachyons, infraparticles, etc., which in some cases do not have quantized spin or fixed mass.) 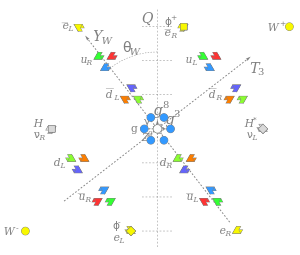 The pattern of weak isospins, weak hypercharges, and color charges (weights) of all known elementary particles in the Standard Model, rotated by the weak mixing angle to show electric charge roughly along the vertical.

While the spacetime symmetries in the Poincaré group are particularly easy to visualize and believe, there are also other types of symmetries, called internal symmetries. One example is color SU(3), an exact symmetry corresponding to the continuous interchange of the three quark colors.

As an example of what an approximate symmetry means, suppose an experimentalist lived inside an infinite ferromagnet, with magnetization in some particular direction. The experimentalist in this situation would find not one but two distinct types of electrons: one with spin along the direction of the magnetization, with a slightly lower energy (and consequently, a lower mass), and one with spin anti-aligned, with a higher mass. Our usual SO(3) rotational symmetry, which ordinarily connects the spin-up electron with the spin-down electron, has in this hypothetical case become only an approximate symmetry, relating different types of particles to each other.

An example from the real world is isospin symmetry, an SU(2) group corresponding to the similarity between up quarks and down quarks. This is an approximate symmetry: While up and down quarks are identical in how they interact under the strong force, they have different masses and different electroweak interactions. Mathematically, there is an abstract two-dimensional vector space

and the laws of physics are approximately invariant under applying a determinant-1 unitary transformation to this space: [7]

would turn all up quarks in the universe into down quarks and vice versa. Some examples help clarify the possible effects of these transformations:

Isospin symmetry can be generalized to flavour symmetry, an SU(3) group corresponding to the similarity between up quarks, down quarks, and strange quarks. [7] This is, again, an approximate symmetry, violated by quark mass differences and electroweak interactions—in fact, it is a poorer approximation than isospin, because of the strange quark's noticeably higher mass.

Nevertheless, particles can indeed be neatly divided into groups that form irreducible representations of the Lie algebra SU(3), as first noted by Murray Gell-Mann and independently by Yuval Ne'eman.