From Wikipedia
(Redirected from Paraboloid of revolution)
https://en.wikipedia.org/wiki/Paraboloid_of_revolution 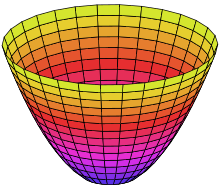 In geometry, a paraboloid is a quadric surface that has exactly one axis of symmetry and no center of symmetry. The term "paraboloid" is derived from parabola, which refers to a conic section that has a similar property of symmetry.

An elliptic paraboloid is shaped like an oval cup and has a maximum or minimum point when its axis is vertical. In a suitable coordinate system with three axes x, y, and z, it can be represented by the equation [1]

where a and b are constants that dictate the level of curvature in the xz and yz planes respectively. In this position, the elliptic paraboloid opens upward. 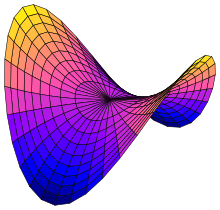 Any paraboloid (elliptic or hyperbolic) is a translation surface, as it can be generated by a moving parabola directed by a second parabola. 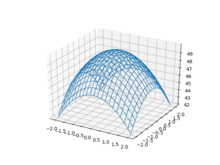 Polygon mesh of a circular paraboloid 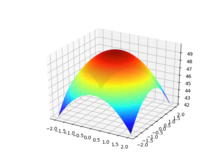 In a suitable Cartesian coordinate system, an elliptic paraboloid has the equation

From the point of view of projective geometry, an elliptic paraboloid is an ellipsoid that is tangent to the plane at infinity.

The plane sections of an elliptic paraboloid can be:

Therefore, the shape of a circular paraboloid is widely used in astronomy for parabolic reflectors and parabolic antennas.

The surface of a rotating liquid is also a circular paraboloid. This is used in liquid-mirror telescopes and in making solid telescope mirrors (see rotating furnace).

A hyperbolic paraboloid with lines contained in it 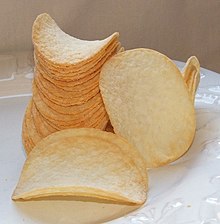 Pringles fried snacks are in the shape of a hyperbolic paraboloid.

A hyperbolic paraboloid is a saddle surface, as its Gauss curvature is negative at every point. Therefore, although it is a ruled surface, it is not developable.

From the point of view of projective geometry, a hyperbolic paraboloid is one-sheet hyperboloid that is tangent to the plane at infinity.

A hyperbolic paraboloid of equation 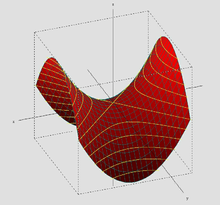 A hyperbolic paraboloid with hyperbolas and parabolas

A plane section of a hyperbolic paraboloid with equation 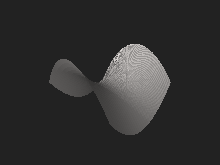 Saddle roofs are often hyperbolic paraboloids as they are easily constructed from straight sections of material. Some examples:

Cylinder between pencils of elliptic and hyperbolic paraboloids

The pencil of elliptic paraboloids

and the pencil of hyperbolic paraboloids

, which is a parabolic cylinder (see image).

The elliptic paraboloid, parametrized simply as

The hyperbolic paraboloid, [2] when parametrized as

If the hyperbolic paraboloid

is rotated by an angle of π/4 in the +z direction (according to the right hand rule), the result is the surface

and if a = b then this simplifies to

Finally, letting a = √2, we see that the hyperbolic paraboloid

is congruent to the surface

which can be thought of as the geometric representation (a three-dimensional nomograph, as it were) of a multiplication table.

are harmonic conjugates, and together form the analytic function

which is the analytic continuation of the ℝ → ℝ parabolic function f(x) = x2/2.

Dimensions of a paraboloidal dish

where F is the focal length, D is the depth of the dish (measured along the axis of symmetry from the vertex to the plane of the rim), and R is the radius of the rim. They must all be in the same unit of length. If two of these three lengths are known, this equation can be used to calculate the third.

A more complex calculation is needed to find the diameter of the dish measured along its surface. This is sometimes called the "linear diameter", and equals the diameter of a flat, circular sheet of material, usually metal, which is the right size to be cut and bent to make the dish. Two intermediate results are useful in the calculation: P = 2F (or the equivalent: P = R2/2D) and Q = √P2 + R2, where F, D, and R are defined as above. The diameter of the dish, measured along the surface, is then given by

where ln x means the natural logarithm of x, i.e. its logarithm to base e.

The volume of the dish, the amount of liquid it could hold if the rim were horizontal and the vertex at the bottom (e.g. the capacity of a paraboloidal wok), is given by

where the symbols are defined as above. This can be compared with the formulae for the volumes of a cylinder (πR2D), a hemisphere (2π/3R2D, where D = R), and a cone (π/3R2D). πR2 is the aperture area of the dish, the area enclosed by the rim, which is proportional to the amount of sunlight a reflector dish can intercept. The surface area of a parabolic dish can be found using the area formula for a surface of revolution which gives