From Wikipedia
https://en.wikipedia.org/wiki/Oven
Enclosed chamber for heating objects
For clay ovens, see Primitive clay oven. For other uses, see Ovens (disambiguation).
Not to be confused with Furnace. 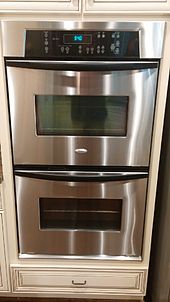 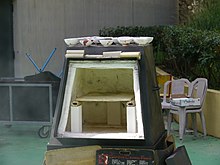 An oven is a tool which is used to expose materials to a hot environment. Ovens contain a hollow chamber and provide a means of heating the chamber in a controlled way. [1] In use since antiquity, they have been used to accomplish a wide variety of tasks requiring controlled heating. [2] Because they are used for a variety of purposes, there are many different types of ovens. These types differ depending on their intended purpose and based upon how they generate heat.

Ovens are often used for cooking, where they can be used to heat food to a desired temperature. Ovens are also used in the manufacturing of ceramics and pottery; these ovens are sometimes referred to as kilns. Metallurgical furnaces are ovens used in the manufacturing of metals, while glass furnaces are ovens used to produce glass.

There are many methods by which different types of ovens produce heat. Some ovens heat materials using the combustion of a fuel, such as wood, coal, or natural gas, [3] while many employ electricity. Microwave ovens heat materials by exposing them to microwave radiation while electric ovens and electric furnaces heat materials using resistive heating. Some ovens use forced convection, the movement of gases inside the heating chamber, to enhance the heating process, or, in some cases, to change the properties of the material being heated, such as in the Bessemer method of steel production. 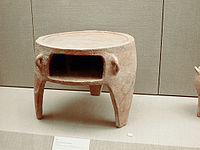 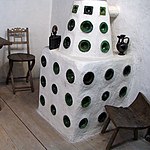 The earliest ovens were found in Central Europe, and date back to 29,000 BC. They were roasting and boiling pits inside yurts used to cook mammoth. [4] In Ukraine from 20,000 BC they used pits with hot coals covered in ashes. The food was wrapped in leaves and set on top, then covered with earth. [5] In camps found in Mezhirich, each mammoth bone house had a hearth used for heating and cooking. [6] Ovens were used by cultures who lived in the Indus Valley and in pre-dynastic Egypt. [7] [8] By 3200 BC, each mud-brick house had an oven in settlements across the Indus Valley. [7] [9] Ovens were used to cook food and to make bricks. [7] Pre-dynastic civilizations in Egypt used kilns around 5000–4000 BC to make pottery. [8]

Tandır ovens used to bake unleavened flatbread were common in Anatolia during the Seljuk and Ottoman eras, and have been found at archaeological sites distributed across the Middle East. The word tandır comes from the Akkadian tinuru, which becomes tanur in Hebrew and Arabic, and tandır in Turkish. Of the hundreds of bread varieties known from cuneiform sources, unleavened tinuru bread was made by adhering bread to the side walls of a heated cylindrical oven. This type of bread is still central to rural food culture in this part of the world, reflected by the local folklore, where a young man and woman sharing fresh tandır bread is a symbol of young love, however, the culture of traditional bread baking is changing with younger generations, especially with those who reside in towns showing preference for modern conveniences. [10] [11]

During the Middle Ages, instead of earth and ceramic ovens, Europeans used fireplaces in conjunction with large cauldrons. These were similar to the Dutch oven. Following the Middle-Ages, ovens underwent many changes over time from wood, iron, coal, gas, and even electric. Each design had its own motivation and purpose. The wood-burning stoves saw improvement through the addition of fire chambers that allowed better containment and release of smoke. Another recognizable oven would be the cast-iron stove. These were first used around the early 1700s when they themselves underwent several variations including the Stewart Oberlin iron stove that was smaller and had its own chimney. [12]

In the early part of the 19th century, the coal oven was developed. It was cylindrical in shape and made of heavy cast iron. The gas oven saw its first use as early as the beginning of the 19th century as well. Gas stoves became very common household ovens once gas lines were available to most houses and neighborhoods. James Sharp patented one of the first gas stoves in 1826. Other various improvements to the gas stove included the AGA cooker invented in 1922 by Gustaf Dalén. The first electric ovens were invented in the very late 19th century, however, like many electrical inventions destined for commercial use, mass ownership of electrical ovens could not be a reality until better and more efficient use of electricity was available. [12]

More recently, ovens have become slightly more high-tech in terms of cooking strategy. The microwave as a cooking tool was discovered by Percy Spencer in 1946, and with the help from engineers, the microwave oven was patented. [12] The microwave oven uses microwave radiation to excite the water molecules in food causing friction, thus producing heat. [13] 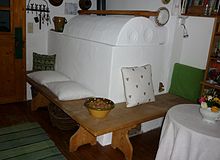 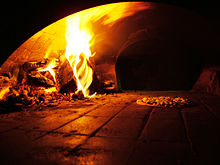 A wood-fired pizza oven, a type of masonry oven 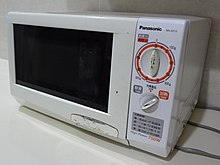 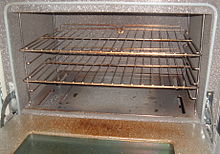 Interior of a modern home oven 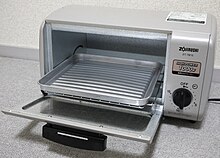 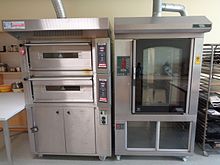 Some ovens can perform in multiple ways, sometimes at once. Combination ovens may be able to microwave and conventional heating such as baking or grilling simultaneously.

Ovens are used as kitchen appliances for roasting and heating. Foods normally cooked in this manner include meat, casseroles and baked goods such as bread, cake and other desserts. In modern times, the oven is used to cook and heat food in many households across the globe.

Ovens usually can use a variety of methods to cook. The most common may be to heat the oven from below. This is commonly used for baking and roasting. The oven may also be able to heat from the top to provide broiling (US) or grilling (UK/Commonwealth). A fan-assisted oven that uses a small fan to circulate the air in the cooking chamber, can be used. [22] [23] Both are also known as convection ovens. An oven may also provide an integrated rotisserie.

Ovens also vary in the way that they are controlled. The simplest ovens (for example, the AGA cooker) may not have any controls at all; the ovens simply run continuously at various temperatures. More conventional ovens have a simple thermostat which turns the oven on and off and selects the temperature at which it will operate. Set to the highest setting, this may also enable the broiler element. A timer may allow the oven to be turned on and off automatically at pre-set times. More sophisticated ovens may have complex, computer-based controls allowing a wide variety of operating modes and special features including the use of a temperature probe to automatically shut the oven off when the food is completely cooked to the desired degree.

Toaster ovens are essentially small-scale ovens and can be used to cook foods other than just toasting. A frontal door is opened, horizontally-oriented bread slices (or other food items) are placed on a rack which has heat elements above and below it, and the door is closed. The controls are set and actuated to toast the bread to the desired doneness, whereupon the heat elements are switched off. In most cases the door must be opened manually, though there are also toaster ovens with doors that open automatically. Because the bread is horizontal, a toaster oven can be used to cook toast with toppings, like garlic bread, melt sandwiches, or toasted cheese. Toaster ovens are generally slower to make toast than pop-up toasters, taking 4–6 minutes as compared to 2–3 minutes. [24] In addition to the automatic-toasting settings, toaster ovens typically have settings and temperature controls to allow use of the appliance as a small oven.

Extra features on toaster ovens can include:

Outside the culinary world, ovens are used for a number of purposes: