From Wikipedia
https://en.wikipedia.org/wiki/Outline_of_bicycles
Overview of and topical guide to bicycles 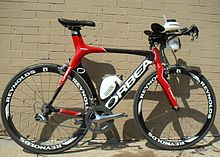 A Half Wheeler trailer bike at the Golden Gate Bridge. 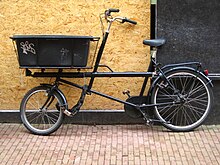 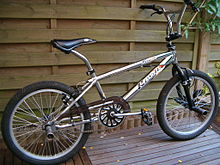 A BMX bike, an example of a bicycle designed for sport.

Diagram of a bicycle. 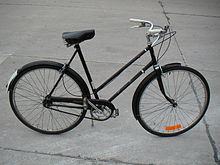 A Triumph with a step-through frame. 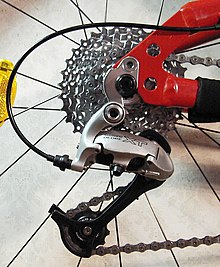 A set of rear sprockets (also known as a cassette) and a derailleur. 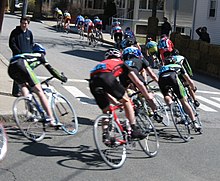 Bicycles leaning in a turn.

A bicycle with shaft drive instead of a chain. 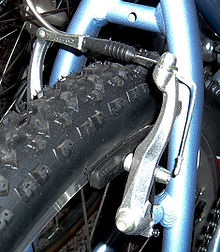 Linear-pull brake, also known by the Shimano trademark: V-Brake, on rear wheel of a mountain bike. 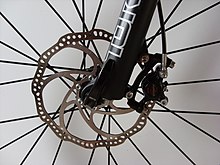 A front disc brake, mounted to the fork and hub 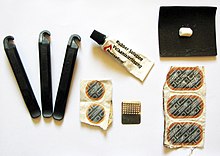 Puncture repair kit with tire levers, sandpaper to clean off an area of the inner tube around the puncture, a tube of rubber solution (vulcanizing fluid), round and oval patches, a metal grater and piece of chalk to make chalk powder (to dust over excess rubber solution). Kits often also include a wax crayon to mark the puncture location. 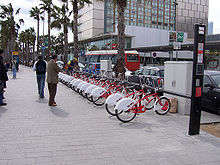 A bike-sharing station in Barcelona. 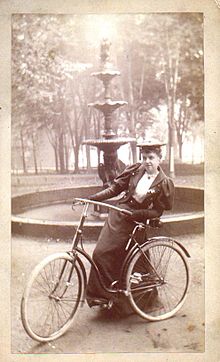 A man uses a bicycle to carry goods in Ouagadougou, Burkina Faso

The following outline is provided as an overview of and topical guide to bicycles:

Bicycle – pedal-driven, human-powered, single-track vehicle, having two wheels attached to a frame, one behind the other. A person who rides a bicycle is called a cyclist or a bicyclist, and the activity is called cycling. Also known as a bike, push bike or cycle.

What type of thing is a bicycle?

Bicycles can be described as all of the following:

History of the bicycle

The bicycle has undergone continual adaptation and improvement since its inception. These innovations have continued with the advent of modern materials and computer-aided design, allowing for a proliferation of specialized bicycle types.

Bicycles have been and are employed for many uses:

List of bicycle types Bicycles can be categorized in different ways: e.g. by function, by number of riders, by general construction, by gearing or by means of propulsion. The more common types include utility bicycles, mountain bicycles, racing bicycles, touring bicycles, hybrid bicycles, cruiser bicycles, and BMX Bikes. Less common are tandems, lowriders, tall bikes, fixed gear, folding models and recumbents (one of which was used to set the IHPVA Hour record).

Unicycles, tricycles and quadracycles are not strictly bicycles, as they have respectively one, three and four wheels, but are often referred to informally as "bikes".

In its early years, bicycle construction drew on pre-existing technologies. More recently, bicycle technology has in turn contributed ideas in both old and new areas.

Bicycle frame - The great majority of today's bicycles have a frame with upright seating which looks much like the first chain-driven bike.

Brands and makers of unusual frames:

Some bicycles are built for specific tracks:

Or special tracks are built specifically for bicycles:

A number of formal and industry standards exist for bicycle components to help make spare parts exchangeable and to maintain a minimum product safety.

The International Organization for Standardization, ISO, has a special technical committee for cycles, TC149, that has the following scope: "Standardization in the field of cycles, their components and accessories with particular reference to terminology, testing methods and requirements for performance and safety, and interchangeability."

Yet to be approved cycle standards from CEN TC333:

The bicycle has had a considerable effect on human society, in both the cultural and industrial realms.

The Vienna Convention on Road Traffic of the United Nations considers a bicycle to be a vehicle, and a person controlling a bicycle (whether actually riding or not) is considered an operator.