From Wikipedia
https://en.wikipedia.org/wiki/Outer_Continental_Shelf
Maritime U.S. federal zone of jurisdiction beyond the jurisdiction of the individual states
For the generic geographical term, see outer continental shelf. 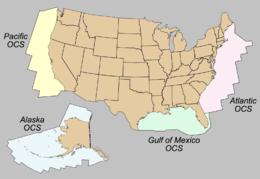 Map of the Outer Continental Shelf

Formally, the OCS is governed by Title 43, Chapter 29 "Submerged Lands", Subchapter III "Outer Continental Shelf Lands", of the U.S. Code. The term "outer Continental Shelf" refers to all submerged land, its subsoil and seabed that belong to the United States and are lying seaward and outside the states' jurisdiction, the latter defined as the "lands beneath navigable waters" in Title 43, Chapter 29, Subchapter I, Section 1301. [1]

The United States OCS has been divided into four leasing regions: [2]

State jurisdiction is defined as follows: [2]

Coastlines are emergent coastline. Thus the landward boundary of the outer continental shelf is a legal construct rather than a physical construct, modified only at intervals by appropriate processes of law.

For legislation concerning the OCS, the United States Senate Committee on Commerce, Science & Transportation has jurisdiction within the United States Senate. [4] In the House of Representatives, the Committee on Natural Resources Subcommittee on Energy and Mineral Resources has jurisdiction over administration and legislation amending the OCSLA. One of the main pieces of legislature affecting the OCS is the Outer Continental Shelf Lands Act (OCSLA), created on August 7, 1953, which defined the OCS as all submerged lands lying seaward of state coastal waters (3 miles offshore) under U.S. jurisdiction; under the OCSLA, the Secretary of the Interior is responsible for the administration of mineral exploration and development of the OCS. The OCSLA has been amended several times, most recently as a result of the Energy Policy Act of 2005. [5]

After Congress passed the Federal Oil and Gas Royalty Management Act in 1982, the Secretary of the Interior designated the Minerals Management Service (MMS) as the administrative agency responsible for the mineral leasing of submerged OCS lands and for the supervision of offshore operations; in 2010 MMS was renamed the Bureau of Ocean Energy Management, Regulation and Enforcement (BOEMRE). [5] On October 1, 2011, BOEMRE was divided into two bureaus, the Bureau of Safety and Environmental Enforcement (BSEE) and the Bureau of Ocean Energy Management (BOEM). BSEE is the agency charged to provide regulatory oversight of deepwater oil drilling and offshore wind energy sources in U.S. Federal waters that extend beyond State jurisdiction. [6]