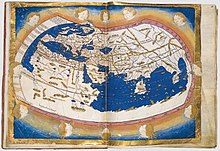 The Old World consists of Africa, Europe, and Asia, or Afro-Eurasia, regarded collectively as the part of the world known to the inhabitants thereof before contact with the Americas. [1] The Americas are therefore contrariwise called the New World. [2]

In the context of archaeology and world history, the term "Old World" includes those parts of the world which were in (indirect) cultural contact from the Bronze Age onwards, resulting in the parallel development of the early civilizations, mostly in the temperate zone between roughly the 45th and 25th parallels north, in the area of the Mediterranean, Mesopotamia, Persian plateau, Indian subcontinent and China.

These regions were connected via the Silk Road trade route, and they have a pronounced Iron Age period following the Bronze Age. In cultural terms, the Iron Age was accompanied by the so-called Axial Age, referring to cultural, philosophical and religious developments eventually leading to the emergence of the historical Western ( Hellenism, " classical"), Near Eastern ( Zoroastrian and Abrahamic) and Far Eastern ( Hinduism, Buddhism, Jainism, Sikhism, Confucianism, Taoism) cultural spheres.

The concept of the three continents in the Old World, viz. Asia, Africa, and Europe, goes back to classical antiquity. Their boundaries as defined by Ptolemy and other geographers of antiquity were drawn along the Nile and Don rivers.[ citation needed] This definition remained influential throughout the Middle Ages (see T and O map) and the Early Modern period.[ citation needed]

The mainland of Afro-Eurasia (excluding islands or island groups such as the Britain and Ireland, Japan, Sri Lanka, Madagascar and the Malay Archipelago) has been referred to as the "World Island". The term may have been coined by Sir Halford John Mackinder in The Geographical Pivot of History. [3]