Old Faithful is a cone geyser in Yellowstone National Park in Wyoming, United States. It was named in 1870 during the Washburn–Langford–Doane Expedition and was the first geyser in the park to be named. [3] [4] It is a highly predictable geothermal feature and has erupted every 44 minutes to two hours since 2000. [5] The geyser and the nearby Old Faithful Inn are part of the Old Faithful Historic District.

In the afternoon of September 18, 1870, the members of the Washburn-Langford-Doane Expedition traveled down the Firehole River from the Kepler Cascades and entered the Upper Geyser Basin. The first geyser that they saw was Old Faithful. Nathaniel P. Langford wrote in his 1871 Scribner's account of the expedition:

It spouted at regular intervals nine times during our stay, the columns of boiling water being thrown from ninety to one hundred and twenty-five feet at each discharge, which lasted from fifteen to twenty minutes. We gave it the name of "Old Faithful."

In the early days of the park, Old Faithful was often used as a laundry:

Old Faithful is sometimes degraded by being made a laundry. Garments placed in the crater during quiescence are ejected thoroughly washed when the eruption takes place. Gen. Sheridan's men, in 1882, found that linen and cotton fabrics were uninjured by the action of the water, but woolen clothes were torn to shreds. [7] 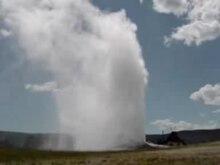 More than 1,000,000 eruptions have been recorded. Harry Woodward first described a mathematical relationship between the duration and intervals of the eruptions in 1938. [8] [9] Old Faithful is not the tallest or largest geyser in the park; those titles belong to the less predictable Steamboat Geyser. [4] The reliability of Old Faithful can be attributed to the fact that it is not connected to any other thermal features of the Upper Geyser Basin. [10]

Eruptions can shoot 3,700 to 8,400 US gallons (14,000 to 32,000 L) of boiling water to a height of 106 to 185 feet (32 to 56 m) lasting from 1+1⁄2 to 5 minutes. The average height of an eruption is 145 feet (44 m). [11] Intervals between eruptions can range from 60 to 110 minutes, averaging 66.5 minutes in 1939, [8] slowly increasing to an average of 90 minutes apart today, which may be the result of earthquakes affecting subterranean water levels. [12] The disruptions have made earlier mathematical relationships inaccurate, but have actually made Old Faithful more predictable in terms of its next eruption.[ citation needed] After the Borah Peak earthquake in central Idaho in October 1983, the eruption intervals of Old Faithful were noticeably lengthened. [13] 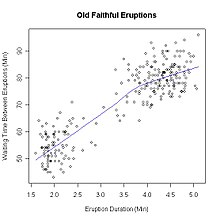 Waiting time between eruptions and the duration of the eruption for Old Faithful.

Between 1983 and 1994, four probes containing temperature and pressure measurement devices and video equipment were lowered into Old Faithful. The probes were lowered as deep as 72 feet (22 m). Temperature measurements of the water at this depth were 244 °F (118 °C), the same as was measured in 1942. The video probes were lowered to a maximum depth of 42 feet (13 m) to observe the conduit formation and the processes that took place in the conduit. Some of the processes observed include fog formation from the interaction of cool air from above mixing with heated air from below, the recharge processes of water entering into the conduit and expanding from below, and entry of superheated steam measuring as high as 265 °F (129 °C) into the conduit. [15]