OBELISK MAKING TECHNOLOGY IN A ... 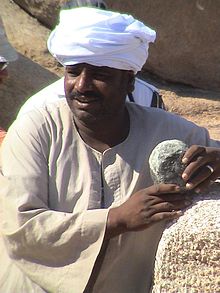 Modern Egyptian suggesting the use of diorite balls as carving tools for granite, at Aswan; a frequently repeated but scientifically unproven method

Obelisk making technology in ancient Egypt is an engineering matter that is not entirely understood today. Ancient Egyptian obelisks are tapering stone pillars which have a square cross-section that were used for ornamental purposes in temples and had religious or socio-political connotations. They were generally made from granite coming from well-known quarries located near the banks of the Nile, mainly in the region of Aswan. In a quarry in this area, the northern quarry which is now an open-air museum, there is the famous unfinished obelisk of huge proportions. It has been partially carved out of the rock, but its bottom face is still attached to the ground. When it cracked, unsuccessful attempts were made to salvage some of the effort by carving a smaller obelisk from it. It is only crudely carved, leaving marks which hint at the technology employed in its extraction.

The carving of the cartouches was done on granite directly on the surface of the stone at the ground, on all four sides. It is not known what technique was employed for carving the granite from the quarry bed-rock and there are very unusual regularly-spaced "scallop" cuts all down the cut surfaces which cannot be explained by the current, frequently repeated, but yet unproven statement that they were "pounded out" by hitting with small balls of diorite. No scientific explanation of these scalloped cut marks has ever been published. Once the sides were cut down into the rock, the stone piece had to be separated from the bedrock. A series of cuts were made, again using the unknown scallop-cutting process. Obelisks made out of softer rock (i.e. sandstone) were extracted from the bedrock by first drilling holes in the rock and then driving in wooden spikes. The wood was then wetted with water until saturated. The wood expanded with the water thus preferentially cracking the rock along the line of the wooden spikes. Many residues left at the rock beds and measuring nearly the size of many famous obelisks (for example the Cleopatra's Needle) are now known to exist at the Unfinished Obelisk open-air museum.

The obelisks were conveniently made at quarries situated in the banks of the Nile so that the heavy weight structures were easily transported by navigating the river in specially built ships that cruised at the flooding days when the river was deeper.[ citation needed] This seems to be a very difficult task to perform but the engineers at the time managed perfectly well without modern machinery or steel cranes.

Large obelisks such as the ones erected by Thutmose III were usually lifted by teams of workers, probably laborers or retired farmers. These structures were lifted with thick ropes attached around the pyramid top and base.