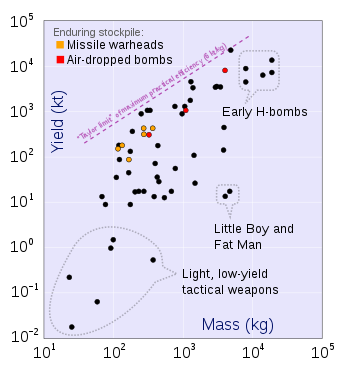 Log–log plot comparing the yield (in kilotons) and mass (in kilograms) of various nuclear weapons developed by the United States.

The explosive yield of a nuclear weapon is the amount of energy released when that particular nuclear weapon is detonated, usually expressed as a TNT equivalent (the standardized equivalent mass of trinitrotoluene which, if detonated, would produce the same energy discharge), either in kilotons (kt—thousands of tons of TNT), in megatons (Mt—millions of tons of TNT), or sometimes in terajoules (TJ). An explosive yield of one terajoule is equal to 0.239 kilotonnes of TNT. Because the accuracy of any measurement of the energy released by TNT has always been problematic, the conventional definition is that one kiloton of TNT is held simply to be equivalent to 1012 calories.

The yield-to-weight ratio is the amount of weapon yield compared to the mass of the weapon. The practical maximum yield-to-weight ratio for fusion weapons ( thermonuclear weapons) has been estimated to six megatons of TNT per metric ton of bomb mass (25 TJ/kg). Yields of 5.2 megatons/ton and higher have been reported for large weapons constructed for single-warhead use in the early 1960s. [1] Since then, the smaller warheads needed to achieve the increased net damage efficiency (bomb damage/bomb mass) of multiple warhead systems have resulted in increases in the yield/mass ratio for single modern warheads.

In order of increasing yield (most yield figures are approximate): 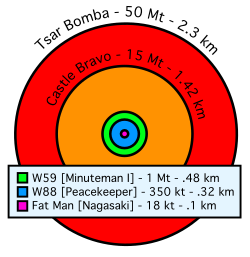 In comparison, the blast yield of the GBU-43 Massive Ordnance Air Blast bomb is 0.011 kt, and that of the Oklahoma City bombing, using a truck-based fertilizer bomb, was 0.002 kt. The estimated strength of the explosion at the Port of Beirut is 0.3-0.5 kt. [8] Most artificial non-nuclear explosions are considerably smaller than even what are considered to be very small nuclear weapons.

The yield-to-mass ratio is the amount of weapon yield compared to the mass of the weapon. According to nuclear-weapons designer Ted Taylor, the practical maximum yield-to-mass ratio for fusion weapons is about 6 megatons of TNT per metric ton (25 TJ/kg). [9][ self-published source?] The "Taylor limit" is not derived from first principles, and weapons with yields as high as 9.5 megatons per metric ton have been theorized. [10] The highest achieved values are somewhat lower, and the value tends to be lower for smaller, lighter weapons, of the sort that are emphasized in today's arsenals, designed for efficient MIRV use or delivery by cruise missile systems.

Large single warheads are seldom a part of today's arsenals, since smaller MIRV warheads, spread out over a pancake-shaped destructive area, are far more destructive for a given total yield, or unit of payload mass. This effect results from the fact that destructive power of a single warhead on land scales approximately only as the cube root of its yield, due to blast "wasted" over a roughly hemispherical blast volume, while the strategic target is distributed over a circular land area with limited height and depth. This effect more than makes up for the lessened yield/mass efficiency encountered if ballistic missile warheads are individually scaled down from the maximal size that could be carried by a single-warhead missile.

The following list is of milestone nuclear explosions. In addition to the atomic bombings of Hiroshima and Nagasaki, the first nuclear test of a given weapon type for a country is included, as well as tests that were otherwise notable (such as the largest test ever). All yields (explosive power) are given in their estimated energy equivalents in kilotons of TNT (see TNT equivalent). Putative tests (like Vela Incident) have not been included.

Yields of nuclear explosions can be very hard to calculate, even using numbers as rough as in the kiloton or megaton range (much less down to the resolution of individual terajoules). Even under very controlled conditions, precise yields can be very hard to determine, and for less controlled conditions the margins of error can be quite large. For fission devices, the most precise yield value is found from " radiochemical/Fallout analysis"; that is, measuring the quantity of fission products generated, in much the same way as the chemical yield in chemical reaction products can be measured after a chemical reaction. The radiochemical analysis method was pioneered by Herbert L. Anderson.

For nuclear explosive devices where the fallout is not attainable or would be misleading, neutron activation analysis is often employed as the second most accurate method, with it having been used to determine the yield of both Little Boy [13] [14] and thermonuclear Ivy Mike's [15] respective yields. Yields can also be inferred in a number of other remote sensing ways, including scaling law calculations based on blast size, infrasound, fireball brightness ( Bhangmeter), seismographic data ( CTBTO), [16] and the strength of the shock wave.

Enrico Fermi famously made a (very) rough calculation of the yield of the Trinity test by dropping small pieces of paper in the air and measuring how far they were moved by the blast wave of the explosion; that is, he found the blast pressure at his distance from the detonation in pounds per square inch, using the deviation of the papers' fall away from the vertical as a crude blast gauge/barograph, and then with pressure X in psi, at distance Y, in miles figures, he extrapolated backwards to estimate the yield of the Trinity device, which he found was about 10  kilotons of blast energy. [20] [21]

I was stationed at the Base Camp at Trinity in a position about ten miles [16 km] from the site of the explosion... About 40 seconds after the explosion the air blast reached me. I tried to estimate its strength by dropping from about six feet small pieces of paper before, during, and after the passage of the blast wave. Since, at the time, there was no wind[,] I could observe very distinctly and actually measure the displacement of the pieces of paper that were in the process of falling while the blast was passing. The shift was about 2 1/2 meters, which, at the time, I estimated to correspond to the blast that would be produced by ten thousand tons of T.N.T. [22] [23] [24]

The surface area (A) and volume (V) of a sphere are

The blast wave, however, was likely assumed to grow out as the surface area of the approximately hemispheric near surface burst blast wave of the Trinity gadget. The paper is moved 2.5 meters by the wave, so the effect of the Trinity device is to displace a hemispherical shell of air of volume 2.5 m × 2π(16 km)2. Multiply by 1 atm to get energy of 4.1×1014 J ~ 100 kT TNT.[ quantify] 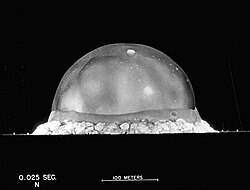 This photograph of the Trinity blast, captured by Berlyn Brixner, was used by G. I. Taylor to estimate its yield.

A good approximation of the yield of the Trinity test device was obtained in 1950 by the British physicist G. I. Taylor from simple dimensional analysis and an estimation of the heat capacity for very hot air. Taylor had initially done this highly classified work in mid-1941 and published an article with an analysis of the Trinity data fireball when the Trinity photograph data was declassified in 1950 (after the USSR had exploded its own version of this bomb).

Taylor noted that the radius R of the blast should initially depend only on the energy E of the explosion, the time t after the detonation, and the density ρ of the air. The only equation having compatible dimensions that can be constructed from these quantities is

Here S is a dimensionless constant having a value approximately equal to 1, since it is low-order function of the heat capacity ratio or adiabatic index

which is approximately 1 for all conditions.

Using the picture of the Trinity test shown here (which had been publicly released by the U.S. government and published in Life magazine), using successive frames of the explosion, Taylor found that R5/t2 is a constant in a given nuclear blast (especially between 0.38 ms, after the shock wave has formed, and 1.93 ms, before significant energy is lost by thermal radiation). Furthermore, he estimated a value for S numerically at 1.

A good approximation to Taylor's constant S for

The value of the heat capacity ratio here is between the 1.67 of fully dissociated air molecules and the lower value for very hot diatomic air (1.2), and under conditions of an atomic fireball is (coincidentally) close to the STP (standard) gamma for room-temperature air, which is 1.4. This gives the value of Taylor's S constant to be 1.036 for the adiabatic hypershock region where the constant R5/t2 condition holds.

As it relates to fundamental dimensional analysis, if one expresses all the variables in terms of mass M, length L, and time T: [26]

(think of the expression for kinetic energy,

and then derive an expression for, say, E, in terms of the other variables, by finding values of

in the general relation

such that the left and right sides are dimensionally balanced in terms of M, L, and T (i.e., each dimension has the same exponent on both sides).

Other methods and controversy

Where these data are not available, as in a number of cases, precise yields have been in dispute, especially when they are tied to questions of politics. The weapons used in the atomic bombings of Hiroshima and Nagasaki, for example, were highly individual and very idiosyncratic designs, and gauging their yield retrospectively has been quite difficult. The Hiroshima bomb, " Little Boy", is estimated to have been between 12 and 18 kilotonnes of TNT (50 and 75 TJ) (a 20% margin of error), while the Nagasaki bomb, " Fat Man", is estimated to be between 18 and 23 kilotonnes of TNT (75 and 96 TJ) (a 10% margin of error). Such apparently small changes in values can be important when trying to use the data from these bombings as reflective of how other bombs would behave in combat, and also result in differing assessments of how many "Hiroshima bombs" other weapons are equivalent to (for example, the Ivy Mike hydrogen bomb was equivalent to either 867 or 578 Hiroshima weapons — a rhetorically quite substantial difference — depending on whether one uses the high or low figure for the calculation). Other disputed yields have included the massive Tsar Bomba, whose yield was claimed between being "only" 50 megatonnes of TNT (210 PJ) or at a maximum of 57 megatonnes of TNT (240 PJ) by differing political figures, either as a way for hyping the power of the bomb or as an attempt to undercut it.