From Wikipedia
https://en.wikipedia.org/wiki/Nubian_languages
Not to be confused with the Nubia language of Papua New Guinea.

The Nubian languages ( Arabic: لغات نوبية‎ : lughāt nūbīyyah) are a group of related languages spoken by the Nubians. They form a branch of the Eastern Sudanic languages, which is part of the wider Nilo-Saharan phylum. Initially, Nubian languages were spoken throughout much of Sudan, but as a result of arabization they are today mostly limited to the Nile Valley between Aswan (southern Egypt) and Al Dabbah as well as villages in the Nuba mountains and Darfur. 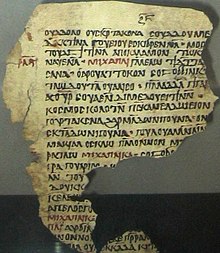 A page from an Old Nubian translation of the Investiture of the Archangel Michael, from the 9th-10th century, found at Qasr Ibrim, now at the British Museum. Michael's name appears in red: Nubians during the period frequently used Greek personal names, often with a terminal ‑ⲓ added. 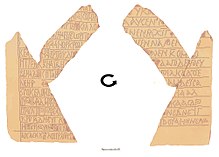 Rilly (2010) distinguishes the following Nubian languages, spoken by in total about 900,000 speakers:

Old Nubian is preserved in at least a hundred pages of documents, comprising both texts of a Christian religious nature and documentary texts dealing with state and legal affairs. Old Nubian was written with a slanted uncial variety of the Coptic alphabet, with the addition of characters derived from Meroitic. These documents range in date from the 8th to the 15th century AD. Old Nubian is currently considered ancestral to modern Nobiin, even though it shows signs of extensive contact with Dongolawi. Another, as yet undeciphered Nubian language has been preserved in a few inscriptions found in Soba, the capital of Alodia. Since their publication by Adolf Ermann in 1881, they are referred as 'Alwan inscriptions' or 'Alwan Nubian.'

Synchronic research on the Nubian languages began in the last decades of the nineteenth century, first focusing on the Nile Nubian languages Nobiin and Kenzi-Dongolawi. Several well-known Africanists have occupied themselves with Nubian, most notably Lepsius (1880), Reinisch (1879) and Meinhof (1918); other early Nubian scholars include Almkvist and Schäfer. Additionally, important comparative work on the Nubian languages has been carried out by Thelwall, Marianne Bechhaus-Gerst in the second half of the twentieth century and Claude Rilly and George Starostin in the twenty-first.

The relation between Dongolawi and Nobiin remains a matter of debate within Nubian Studies. Ethnologue's classification is based on glotto-chronological research of Thelwall (1982) and Bechhaus-Gerst (1996), which considers Nobiin the earliest branching from Proto-Nubian. They attribute the current syntactical and phonological proximity between Nobiin and Dongolawi to extensive language contact. Arguing that there is no archeological evidence for a separate migration to the Nile of Dongolawi speakers, Rilly (2010) provides evidence that the difference in vocabulary between Nobiin and Dongolawi is mainly due to a pre-Nubian substrate underneath Nobiin, which he relates to the Meroitic. Approaching the inherited proto-Nubian vocabulary in all Nubian languages systematically through a comparative linguistic approach, Rilly arrives at the following classification: [10]

There are three currently active proposals for a Nubian alphabet: based on the Arabic script, the Latin script and the Old Nubian alphabet. Since the 1950s, Latin has been used by four authors, Arabic by two and Old Nubian by three, in the publication of various books of proverbs, dictionaries, and textbooks. For Arabic, the extended ISESCO system[ citation needed] may be used to indicate vowels and consonants not found in the Arabic alphabet itself.