North Sumatra ( Indonesian: Sumatra Utara) is a province of Indonesia located on the northern part of the island of Sumatra. Its capital and largest city is Medan. North Sumatra is the fourth most-populous province after West Java, East Java and Central Java. The province covers an area of 72,981 km2. According to the 2020 population census, the province had a population of 14,799,361. [3]

The last seafarers that made it to Sumatra were the Dutch. A government of North Sumatra named Gouvernement van Sumatra with the area covering the whole of the island of Sumatra, was headed by a governor who was based in the city of Medan.

After independence, the first session of the National Committee of Regions (KND), Sumatra was then divided into three sub-provinces namely North Sumatra, Central Sumatra and South Sumatra. North Sumatra province itself was an amalgamation of three administrative regions called Residencies namely: the Residency of Aceh, the East Sumatra Residency, and the Residency of Tapanuli.

In early 1949, the reorganization of government took place in Sumatra, with the decision of the Government Emergency R.I. No. 22 / Govt / Emergency Government on May 17, 1949, which abolished the post of Governor of North Sumatra. Furthermore, the Government Emergency Decree R.I. on December 17, 1949, established the Province of Aceh and Tapanuli Province / East Sumatra. Then, with a Government Regulation in lieu of Law No. 5 Year 1950 on August 14, 1950, such provisions were lifted and reshaped North Sumatra Province.

The province of North Sumatra stretches across the island of Sumatra, between the Indian Ocean and the Strait of Malacca. It borders the province of Aceh on the northwest and Riau and West Sumatra in the southeast. It has an area of 72,981  km2. The province contains a broad, low plain along the Strait of Malacca on which the provincial capital, Medan, is located. In the south and west, the land rises to the mountain range that runs the length of Sumatra; the mountains here are dominated by Lake Toba, formed from the caldera of an ancient volcano. Several large islands in the Indian Ocean off the west coast of Sumatra are currently part of North Sumatra, most notably Nias Island and the Batu Islands.

The Nias archipelago consists of the main island of that name and other smaller islands in the vicinity, located off the coast of western Sumatra in the Indian Ocean. The administration center is located in Gunung Sitoli.

In North Sumatra, there are currently two national parks, the Gunung Leuser National Park and Batang Gadis National Park. According to the Ministerial Decree, No. 44 of 2005, the forest area in North Sumatra today covers 3,742,120 hectares (ha), which consists of a Natural Reserve Area/Natural Conservation Area covering an area of 477,070 ha, 1,297,330 ha of protected forest, 879,270 ha of limited production forest, 1,035,690 ha of permanent production forest, and 52,760 ha of production forest that can be converted.

However, the figure above is only de jure. In reality, the forests are not as large as the figures suggest. A lot of the forests are damaged, due to encroachment and illegal logging. So far, over 206,000 ha of forests in Sumatra has experienced changes in function. As many as 163,000 ha were converted to plantations and 42,900 ha were transmigration areas.

The administrative center of North Sumatra is located in the city Medan, governed by a governor. Earlier, North Sumatra was included in a single Sumatra province when Indonesia became independent in 1945. In 1950, North Sumatra Province was formed including the former residencies of East Sumatra, Tapanuli, and Aceh. In 1956, Aceh split off to form a separate Aceh Province.

North Sumatra is currently subdivided into 25 regencies and 8 autonomous cities (formerly municipalities), listed below with their populations at the 1 May 2010 Census, the 1 May 2015 Intermediate Census, and the 2020 Census. [5] these in turn are sub-divided into 444 districts, which in turn are further sub-divided into 6,110 villages.With proposals under consideration to create three new provinces from parts of the present North Sumatra, these regencies and cities are grouped below according to the putative new province in which they are situated: 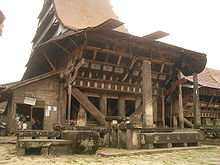 Omo Sebua, means the big house. Is a traditional house from South Nias. It was king of Tano Niha who lived in it, located in Bawomataluo

This region contains the substantial island of Nias and various small offshore islands, including the Batu Islands to the south which form part of South Nias Regency.

Maimoon Palace, a historical palace in Medan, it was used as a house for Deli Sultanate for a long time and still active till this day

North Sumatra is a multi-ethnic province. The Malay people are regarded as the native people of this province. The Javanese reside around Deli Serdang Regency, including Medan, while the west coast of the province is mainly inhabited by Pakpak, Mandailing and Minangkabau people. The central region around Lake Toba, is predominantly inhabited by Bataks. The Nias people reside mostly in Nias Island and the surrounding islands. With the opening of tobacco plantations in East Sumatra during the Dutch East Indies era, the colonial government employed many contract labourers for plantations. The newcomers were Chinese and Indian migrants, who were welcomed in Sumatra.[ citation needed]

Distribution of the Batak people and the Toba, Simalungun, Karo, Pakpak, Angkola and Mandailing sub-groups

The distribution of the tribes, clans, and ethnic groups in North Sumatra is as follows:[ citation needed]

In general, the widely used language is Indonesian. The Malays around Deli Serdang and Langkat mostly speak Malay language, which is similar to Peraknese Malay language. The Javanese people, especially around rural and plantation areas, use Javanese in daily conversation, while the urban Javanese mostly speak Indonesian.[ citation needed]

Mostly ethnic Chinese in North Sumatra are fluent in Hokkien with Zhangzhou dialect mixed with Malay/Bataknese/Indonesian words, while for Chinese around Labuhan Batu area using Quanzhou dialect that has similarity with Bagansiapiapi Hokkien. The small Teochew and Hainanese speakers are also exist. The ethnic Indian people in Medan speak Tamil with a some Punjabi speakers among Punjabis. The Acehnese people speak Aceh and Gayo language.[ citation needed]

More than 95 percent out of all residents are either Muslim or Christian; the remainder are Buddhists, Hindus, or follow folk religions such as Confucians, Parmalim, and Taoists. These are the recognized religions of North Sumatra:

North Sumatra is rich in natural resources such as natural gas in the area of Tandam, Binjai and petroleum in Pangkalan Brandan, Langkat which has been explored since the days of the Dutch East Indies. Besides that, in Kuala Tanjung, Asahan, there are the company named PT Inalum (abbreviated of Indonesia Aluminium) that engaged in ore mining and smelting of aluminium which is the only one in Southeast Asia.

The rivers that disgorge in the mountains around Lake Toba is also a natural resource that is potential enough to be an exploited to resource of hydropower plants. Asahan hydropower which is the largest hydropower plant in Sumatra Island is located on Porsea in Toba Samosir Regency.

Moreover, in the mountains there are many geothermal hot spots were very likely to be developed as a source of thermal energy or steam that can then be transformed into electrical energy.

Inside of Palm Oil Estate of Serdang Bedagai Regency

The province is famous for its plantation area, until now, the plantation economy of the province remains to be excellent. The plantations are managed by private companies and the state. SOE Plantation area is located in North Sumatra, among others PT Perkebunan Nusantara II (PTPN II), PTPN IV and PTPN III.

Besides North Sumatra is also famous for its plantation area. Until now, the plantation economy of the province remains to be excellent. The plantations are managed by private companies also the state. North Sumatra produces rubber, cocoa, tea, palm oil, coffee, cloves, coconut, cinnamon, and tobacco. The plantation is spread in East coast area such as Deli Serdang, Serdang Bedagai Langkat, Simalungun, Asahan, Labuhan Batu, and also around west coast: Central and South Tapanuli. 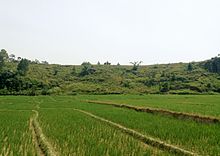 There are three leading mining company in North Sumatra:

North Sumatra export performance is likely to increase from year to year. In 2004 the foreign exchange earnings reached US$4.24 billion, up 57.72% from the previous year from the sector.

Coffee exports from North Sumatra reached a record high of 46.290 tonnes with Japan's main export destination countries during the last five years. Sumatra coffee exports also listed as the top 10 highest export products with a value of US$3.25 million or 47200.8 tons from January to October 2005.

Export performance of agricultural imports also decreased the essential oil dropped 18 percent from US$162,234 to US$773,023, seafood / shrimp, coconut oil and robusta coffee also dropped quite dramatically to 97 per cent. Some commodities were increased (a value of over US $ Million) is cocoa, horticulture, arabica coffee, palm oil, natural rubber, seafood (non shrimp). For the results of the molding industry, vehicle tires and rubber gloves.

North Sumatra has lots of travel destinations. According to Ministry of Tourism, North Sumatra is ranked on the top 10 most visited province in Indonesia. There are various kinds of tourist destinations that could be found throughout the province, Berastagi is best known as a hilly place with a cooler temperature as the whole province is in tropical region. Lake Toba is also a popular travel destination. Toba is a large volcanic lake which has an island inside of it, Samosir Island. Nias Island and other several islands nearby named Batu Islands is a popular spot for surfing. The capital itself, Medan, has many places of interest, mainly for its historical sites. The city is also known for its variety of cuisine. The list below is the most known places of interest in North Sumatra: 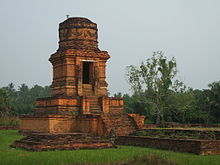 The modern Kualanamu International Airport was opened on July 25, 2013 and is located almost 40 kilometres from Medan. The airport replaces the old Polonia International Airport. [15] It serves flights to several Indonesian and Malaysian cities, along with flights to Singapore, Thailand, Hong Kong, and Saudi Arabia. In passenger numbers, Kualanamu is the fifth largest airport in Indonesia.

Other airports in North Sumatra are:

North Sumatra has an international seaport at Belawan, near Medan and is now preparing to have a new seaport at Kuala Tanjung, in Batubara Regency, for about Rp1 trillion ($114 million) budget. [16]

Regional Division I North Sumatra and Aceh or Divre I is regional railway from Aceh to North Sumatra operated by Kereta Api Indonesia, but only in-operation railway are from Binjai to Medan (Sri Lelawangsa), Medan to Pematangsiantar (Siantar Express), Medan to Tanjungbalai (Putri Deli) and Medan to Rantau Parapat (Sribilah), there are an underconstruction rail way to Banda Aceh in Aceh province also to Pekanbaru, Riau province. Medan also has it first airport rail link in Indonesia, called Kualanamu Airport Rail Link. It connects the city to Kualanamu Airport.