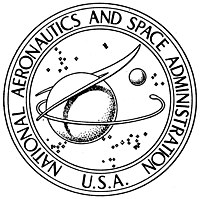 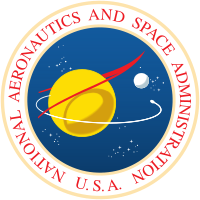 The National Aeronautics and Space Administration (NASA) logo has three main official designs, although the one with stylized red curved text (the "worm") was retired from official use from May 22, 1992, until April 3, 2020, when it was reinstated as a secondary logo. The three logos include the NASA insignia (also known as the "meatball" [1]), the NASA logotype (also known as the "worm"), and the NASA seal. [2] [3] [4]

In the NASA insignia design, the sphere represents a planet, the stars represent space, the red chevron is a wing representing aeronautics (the latest design in hypersonic wings at the time the logo was developed), and then the orbiting spacecraft going around the wing. It is known officially as the insignia. [7]

After a NASA Lewis Research Center illustrator's design was chosen for the new agency's official seal, the executive secretary of NASA asked James Modarelli, the head of Reports Division at Lewis Research Center, to design a logo that could be used for less formal purposes. Modarelli simplified the seal, leaving only the white stars and orbital path on a round field of blue with a red vector. He then added white N-A-S-A lettering. [1]

In 1974, as part of the Federal Graphics Improvement Program of the National Endowment for the Arts, NASA hired Richard Danne and Bruce Blackburn to design a more modern logo. [7] In 1975, the agency switched to the modernist NASA logotype, nicknamed "the worm", a red, stylized rendering of the letters N-A-S-A. [8] The horizontal bars on the As are removed in the worm logo.

Retirement and return of the 'worm'

The NASA logotype was retired from official use on May 22, 1992 [7] by NASA Administrator Daniel Goldin. The design was used only for special occasions and commercial merchandising purposes approved by the Visual Identity Coordinator at NASA Headquarters until 2020, when it was brought out of retirement by administrator Jim Bridenstine. The re-instated logo was unveiled on the booster for SpaceX's Crew-Demo 2 Mission. [9] This marked its first official use since 1992. [10]

As of 2020, [update] the logo, with blue lettering instead of red, is also used by the NASA Federal Credit Union. [11]

The official NASA seal is reserved for use in connection with the NASA Administrator. It is used in more formal traditional and ceremonial events such as award presentations and press conferences. According to NASA Headquarters, the seal should never be used with the NASA insignia, since the two elements are intended for different purposes and are visually incompatible when seen side by side.

Like most images produced by the United States Government, the insignia, the "worm" logo and the NASA seal are in the public domain. [12] However, their usage is restricted under Code of Federal Regulations 14 CFR 1221. [13] These NASA emblems should be reproduced only from original reproduction proofs, transparencies, or computer files available from NASA Headquarters.

The colors used in the logo are the following: [14]