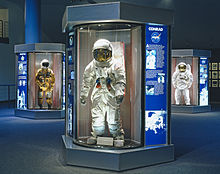 The NASA Astronaut Corps is a unit of the United States National Aeronautics and Space Administration (NASA) that selects, trains, and provides astronauts as crew members for U.S. and international space missions. It is based at Johnson Space Center in Houston, Texas.

The first U.S. astronaut candidates were selected by NASA in 1959, for its Project Mercury with the objective of orbiting astronauts around the Earth in single-man capsules. The military services were asked to provide a list of military test pilots who met specific qualifications. After stringent screening, NASA announced its selection of the " Mercury Seven" as its first astronauts. Since then, NASA has selected 20 more groups of astronauts, opening the corps to civilians, scientists, doctors, engineers, and school teachers. As of the 2009 Astronaut Class 61% of the astronauts selected by NASA have come from military service. [1]

NASA selects candidates from a diverse pool of applicants with a wide variety of backgrounds. From the thousands of applications received, only a few are chosen for the intensive Astronaut Candidate training program. Including the "Original Seven", 339 candidates have been selected to date. [2]

The Astronaut Corps is based at the Lyndon B. Johnson Space Center in Houston, although members may be assigned to other locations based on mission requirements, e.g. Soyuz training at Star City, Russia.

The Chief of the Astronaut Office is the most senior leadership position for active astronauts in the Corps. The Chief Astronaut serves as head of the Corps and is the principal adviser to the NASA Administrator on astronaut training and operations. The first Chief Astronaut was Deke Slayton, appointed in 1962. The current Chief Astronaut is Gregory R. Wiseman.

Salaries for newly hired civilian astronauts are based on the federal government's General Schedule pay scale for grades GS-11 through GS-14. The astronaut's grade is based on his or her academic achievements and experience. [3] Astronauts can be promoted up to grade GS-15. [4] As of 2015, astronauts based at the Johnson Space Center in Houston, Texas, earn between $66,026 (GS-11 step 1) and $158,700 (GS-15 step 8 and above). [5]

Military astronauts are detailed to the Johnson Space Center and remain on active duty for pay, benefits, leave, and similar military matters.

There are no age restrictions for the NASA Astronaut Corps. Astronaut candidates have ranged between the ages of 26 and 46, with the average age being 34. Candidates must be U.S. citizens to apply for the program.

There are three broad categories of qualifications: education, work experience, and medical. [6]

Candidates must have a master's degree from an accredited institution in engineering, biological science, physical science or mathematics. [7] The degree must be followed by at least two to three years of related, progressively responsible, professional experience (graduate work or studies) or at least 1,000 hours of pilot-in-command time in jet aircraft. An advanced degree is desirable and may be substituted for experience, such as a doctoral degree (which counts as the two years experience). Teaching experience, including experience at the K – 12 levels, is considered to be qualifying experience.

Candidates must have the ability to pass the NASA long-duration space flight physical, which includes the following specific requirements:

There are currently 19 "international active astronauts", "who are assigned to duties at the Johnson Space Center", [10] who were selected by their home agency to train as part of a NASA Astronaut Group and serve alongside their NASA counterparts. While the international astronauts, Payload Specialists, and Spaceflight Participants go through training with the NASA Astronaut Corps, they are not considered members of the corps.

As of January 2021 [update], the corps has 16 "management" astronauts, who remain NASA employees but are no longer eligible for flight assignment. [11] The current management astronauts are assigned to NASA operations as follows: Ames Research Center (one astronaut); Goddard Space Flight Center (one); Johnson Space Center (ten); Langley Research Center (one); and NASA Headquarters (three). [11] The current management astronauts includes personnel chosen to join the corps as early as 1985 ( Group 11, Associate Administrator Robert D. Cabana) [12] and as recently as 2009 ( Group 20, Serena Auñón-Chancellor of medical and CAPCOM branches). [13]

The term "Astronaut Candidate" (informally "ASCAN" [14]) refers to individuals who have been selected by NASA as candidates for the NASA Astronaut Corps and are currently undergoing a candidacy training program at the Johnson Space Center. The most recent class of Astronaut Candidates was selected in 2017 after receiving more than 18,300 applications. Upon completion of a two-year training program, they were promoted to the rank of Astronaut in January 2020. [15] [16]

Only three Astronaut Candidates have resigned before completing training: Brian O'Leary and Anthony Llewellyn, both from the 1967 Selection Group, and Robb Kulin of the 2017 group. O'Leary resigned in April 1968 after additional Apollo missions were cancelled, Llewellyn resigned in August 1968 after failing to qualify as a jet pilot, and Kulin resigned in August 2018 for unspecified personal reasons. [17]

Selection as an Astronaut Candidate and subsequent promotion to Astronaut does not guarantee the individual will eventually fly in space. Some have voluntarily resigned or been medically disqualified after becoming astronauts but before being selected for flights.

Civilian candidates are expected to remain with the Corps for at least five years after initial training; military candidates are assigned for specific tours. After these time limits, members of the Astronaut Corps may resign or retire at any time.

Three members of the Astronaut Corps ( Gus Grissom, Edward White, and Roger B. Chaffee) were killed during a ground test accident while preparing for the Apollo 1 mission. Eleven were killed during spaceflight, on Space Shuttle missions STS-51-L and STS-107. [note 1] Another four ( Elliot See, Charles Bassett, Theodore Freeman, and Clifton Williams) were killed in T-38 plane crashes during training for space flight during the Gemini and Apollo programs. Another was killed in a 1967 automobile accident, and another died in a 1991 commercial airliner crash while traveling on NASA business.

Two members of the Corps have been involuntarily dismissed: Lisa Nowak and William Oefelein. Both were returned to service with the US Navy.