From Wikipedia
(Redirected from Mysore state)
https://en.wikipedia.org/wiki/Mysore_state
This article is about the state of the Indian Union. For the princely state during the British Raj, see Kingdom of Mysore. For the current state of India, see Karnataka (state).
Indian state from 1947 to 1956; enlarged and renamed to Karnataka State

Mysore State was a state within the Dominion and the later Republic of India from its formation in 1947, out of the territories of the Kingdom of Mysore, until 1956 [1] with Bangalore as its capital. The state was considerably enlarged in 1956 when it became a linguistically homogeneous Kannada-speaking state [2] within the Union of India. It was subsequently renamed as the state of Karnataka.

The Kingdom of Mysore /maɪˈsɔːr/ was one of the three largest princely states within the former British Empire of India. Upon India's independence from Britain in 1947, Maharaja of Mysore Jayachamarajendra Wodeyar signed the instrument of accession, incorporating his realm with the Union of India, on 15 August 1947. The territories of the erstwhile princely state of Mysore were then reconstituted into a state within the Union of India. [3] 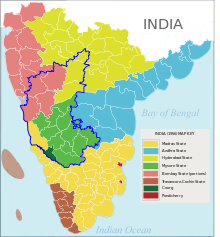 In 1956, the Government of India effected a comprehensive re-organisation of provincial boundaries, based upon the principle of shared language. As a result of the States Reorganisation Act on 1 November 1956, the Kannada-speaking districts of Belgaum (except Chandgad taluk), Bijapur, Dharwar, and North Canara were transferred from Bombay State to Mysore State. [4] Bellary district was transferred from Andhra State. South Canara was transferred from Madras State and the Koppal, Raichur, Gulbarga and Bidar districts from Hyderabad State. Also, the small Coorg State was merged, becoming a district of Mysore State. [5] [6] The state was renamed Karnataka on November 1, 1973. [7]