From Wikipedia
https://en.wikipedia.org/wiki/Mysore_district
This article is about the district. For its eponymous headquarters, see Mysore.
District of Karnataka in India

This district has a prominent place in the history of Karnataka; Mysore was ruled by the Wodeyars from the year 1399 till the independence of India in the year 1947. It features many tourist destinations, from Mysore Palace to Nagarhole National Park. It is the third-most populous district in Karnataka (out of 31), after Bangalore Urban. [5]

Mysore district gets its name from the city of Mysore which is also the headquarters of the district. The original name of this city was Mahishapura derived from a demon named Mahishasura. A statue of Mahishasura, after whom the city is named, and a temple dedicated to Goddess Chamundeshwari on the top of Chamundi Hill near Mysore city, relate to the legend of its origin.[ citation needed]

The earliest known reference of rulers in Mysore district are the Gangas who during the rule of King Avinitha (469-529 CE), moved the capital from Kolar to Talakadu on the banks of the river Kaveri in the Tirumakudalu Narasipura taluk. [6] Talakadu remained their regal capital till the end of Ganga rule in the early 11th century. Gangas ruled over a greater part of Mysore district, then known by the name of Gangavadi. In the end of the 8th century, the Rashtrakuta king Dhruva Dharavarsha defeated the Ganga king Shivamara II and wrested Gangavadi from him. Gangavadi came under the governorship of Kambarasa, the son of Dhruva Dharavarsha. Gangas who were overthrown from Gangavadi, had to wait till their king Nitimarga Ereganga (853–869 CE) won a victory against the Rashtrakutas at Rajaramudu. Seeing the increasing might of the Gangas, the Rashtrakuta King Amoghavarsha I gave his daughter Revakanimmadi in marriage to the son of Ereganga, Butuga II who became the ruler of Gangavadi. Gangas ruled over Gangavadi till the Ganga king, Rakkasa Ganga (985–1024 CE) was defeated by the Cholas. [7]

The Wodeyars continued to rule over Mysore till the reign of Krishnaraja Wodeyar II (1734–1766), when Hyder Ali Khan and his son Tipu Sultan became the virtual rulers of Mysore. [9] Though there were Wodeyar kings during the rule of Hyder Ali and Tipu Sultan, they were mere figureheads. With the death of Tipu Sultan in 1799 under the hands of the British, the Wodeyars were reinstated to the throne of Mysore and the capital was shifted back to Mysore. Prince Krishnaraja Wodeyar III who was just 5 years old was installed on the throne of Mysore in 1799. [9] Wodeyars were the subsidiaries of the British Empire and had to pay annual subsidies. During the rule of Krishnaraja Wodeyar III, the British took the kingdom back from Wodeyars in 1831 under the pretext that the Wodeyar king did not pay the annual subsidy. [11] Commissioners were appointed to rule over the Mysore kingdom. Mark Cubbon (Cubbon Road and Cubbon Park in Bangalore city are named after him) and L. B. Bowring (Bowring Hospital in Bangalore city is named after him) were the prominent British Commissioners who ruled over Mysore. However, the Wodeyar kings raised a plea against this with the British Parliament who gave a ruling favour of the Wodeyars. In 1881, Chamaraja Wodeyar IX (son of Krishnaraja Wodeyar III and Wodeyar king since 1868) was given back the reins of the Mysore kingdom from the British. [11] The Wodeyars continued to rule over the Mysore Kingdom, till the rule of Jayachamaraja Wodeyar who, in the year 1947, merged his kingdom into the new dominion of independent India. He remained as a Maharaja till India became a republic in the year 1950 after which he was anointed as a Raja Pramukh (a constitutional position) as the head of Mysore state till 1956. In 1956, after the reorganisation of Indian states, the Mysore state was born and Jayachamaraja Wodeyar was made as the governor of this state – the position he held until 1964. 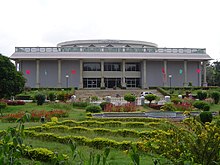 The district lies on the undulating table land of the southern Deccan plateau, within the watershed of the Kaveri River, which flows through the northwestern and eastern parts of the district. The Krishna Raja Sagara reservoir, which was formed by building a dam across the Kaveri, lies on the northern edge of the district. Nagarhole National Park lies partly in Mysore district and partly in adjacent Kodagu District.

Mountains are rare in the district, only isolated peaks are present, namely Chamundi Hill(1030m above MSL) and Sidilu Mallikarjuna Hill Temple (1320m above MSL), Bettadapura in Periyapatna Taluk, latter being the highest mountain peak in the Mysore district.

The temperature in the district varies from 15 °C in winters to 35 °C in summers. Mysore district receives an average rainfall of 785 mm. [12]

Agriculture is the backbone of the economy of this district as it is with the rest of India. Though the agriculture is highly dependent on the rainfall, the rivers Kaveri and Kabini provide the irrigation needs required for agriculture in this district. According to the 2001 census, about 3,25,823 farmers are involved in cultivation in this district. In the year 2001–2002, Mysore district yielded a foodgrain production of 608,596 Tonnes which is a contribution of 6.94% of the total food grain production in the state for the year. [15] Some of the important crops grown here are cotton, grams, groundnut, jowar, maize, ragi, rice, sugarcane, sunflower and tur. [16] Horticulture is another area contributing significantly to the economy; especially the palm oil production in H D Kote Taluk. [17]

The first major industry to be set up in Mysore with the partnership of the Maharaja of Mysore when Mysore was still an industrially backward district in 1960 was the now defunct Ideal Jawa India Ltd. Motorcycle factory with technical collaboration with Jawa Motors of Czechoslovakia.

Some of the major industries located near Mysore city are:

Some of the major industries located in Nanjangud are:

Mysore is proving to be the next IT hub in Karnataka after the phenomenal success of Bangalore. The government of India has recognised Mysore as number one among the 20 Tier II cities of India for the promotion of the IT industry. [19] Currently, all of the IT related industries are concentrated around Mysore city. The Software Technology Park (STP) in Mysore was inaugurated in 1998 by the prime minister of India, Atal Bihari Vajpayee. As of August 2006, there are 42 companies registered with the STP. Software exports from Mysore were expected to double to about Rs. 850 crores in the financial year 2006-07 from previous year's exports of Rs. 400 crores. [19] Some of the major IT companies located here are:

Tourism is another big industry in Mysore. Its importance as a tourist destination was evident when it was selected as the venue for the Karnataka Tourism Expo in 2006. [20] Though Mysore city is well known as a tourist place, other parts the district are yet to see growth in tourism. However, the tourism department plans to develop other areas like Nanjangud, Bettadapura, Hedathali, Kapadi, Mudukuthore Betta, Mugur and Tirumakudalu Narasipura as tourist places. [21]

Skyline of Hootagalli, suburb of Mysore City and a CMC

Mysore district is divided into three subdivisions, Nanjangud, Mysore and Hunsur. The Mysore district administration is headed by the Deputy Commissioner who also has the additional role of a District Magistrate. Assistant Commissioners, Tahsildars, Shirastedars (revenue official at Tahsil level), Revenue inspectors and Village Accountants help the Deputy Commissioner in the administration of the district. Mysore city is the headquarters of the district. It lies on the north eastern part of the district and is well known for its beautiful palaces and also for the festivities that take place during Dasara.

Mysore district elects 11 members to the Legislative Assembly of the State of Karnataka. The 11 assembly constituencies are: