From Wikipedia
(Redirected from Mycobacteria)
https://en.wikipedia.org/wiki/Mycobacteria
Genus of bacteria

Mycobacterium is a genus of Actinobacteria, given its own family, the Mycobacteriaceae. Over 190 species are recognized in this genus. [3] This genus includes pathogens known to cause serious diseases in mammals, including tuberculosis ( Mycobacterium tuberculosis) and leprosy ( Mycobacterium leprae) in humans. [4] The Greek prefix myco- means "fungus," alluding to the way mycobacteria have been observed to grow in a mold-like fashion on the surface of cultures. [5] It is acid fast and cannot be stained by the Gram stain procedure. 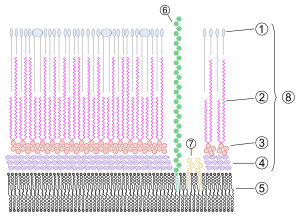 Mycobacteria are aerobic. They are bacillary in form, at least in most phases that have attracted human microbiological attention to date; they are straight or slightly curved rods between 0.2 and 0.6 µm wide and between 1.0 and 10 µm long. They are generally nonmotile bacteria, except for the species Mycobacterium marinum, which has been shown to be motile within macrophages. They are characteristically acid-fast. [4] Mycobacteria have an outer membrane. [6] They possess capsules, and most do not form endospores. M. marinum and perhaps M. bovis have been shown to sporulate; [7] however, this has been contested by further research. [8] The distinguishing characteristic of all Mycobacterium species is that the cell wall is thicker than in many other bacteria, being hydrophobic, waxy, and rich in mycolic acids/mycolates. The cell wall consists of the hydrophobic mycolate layer and a peptidoglycan layer held together by a polysaccharide, arabinogalactan. The cell wall makes a substantial contribution to the hardiness of this genus. The biosynthetic pathways of cell wall components are potential targets for new drugs for tuberculosis. [9]

Many Mycobacterium species adapt readily to growth on very simple substrates, using ammonia or amino acids as nitrogen sources and glycerol as a carbon source in the presence of mineral salts. Optimum growth temperatures vary widely according to the species and range from 25 °C to over 50 °C.[ citation needed]

Most Mycobacterium species, including most clinically relevant species, can be cultured in blood agar. [10] However, some species grow very slowly due to extremely long reproductive cycles— M. leprae, may take more than 20 days to proceed through one division cycle (for comparison, some E. coli strains take only 20 minutes), making laboratory culture a slow process. [4] In addition, the availability of genetic manipulation techniques still lags far behind that of other bacterial species. [11]

A natural division occurs between slowly- and rapidly-growing species. Mycobacteria that form colonies clearly visible to the naked eye within 7 days on subculture are termed rapid growers, while those requiring longer periods are termed slow growers.[ citation needed]

Scotochromogens (Group II)
Produce deep yellow to orange colonies when grown in the presence of either the light or the dark.[ citation needed]

Non-chromogens (Groups III and IV)
Nonpigmented in the light and dark or have only a pale yellow, buff or tan pigment that does not intensify after light exposure.[ citation needed]

Mycobacteria are widespread organisms, typically living in water (including tap water treated with chlorine) and food sources. Some, however, including the tuberculosis and the leprosy organisms, appear to be obligate parasites and are not found as free-living members of the genus.[ citation needed]

Mycobacteria can colonize their hosts without the hosts showing any adverse signs. For example, billions of people around the world have asymptomatic infections of M. tuberculosis (Latent TB).[ citation needed]

Mycobacterial infections are notoriously difficult to treat. The organisms are hardy due to their cell wall, which is neither truly Gram negative nor positive. In addition, they are naturally resistant to a number of antibiotics that disrupt cell-wall biosynthesis, such as penicillin. Due to their unique cell wall, they can survive long exposure to acids, alkalis, detergents, oxidative bursts, lysis by complement, and many antibiotics. Most mycobacteria are susceptible to the antibiotics clarithromycin and rifamycin, but antibiotic-resistant strains have emerged.[ citation needed]

As with other bacterial pathogens, M. tuberculosis produces a number of surface and secreted proteins that contribute to its virulence. However, the mechanism by which these proteins contribute to virulence remains unknown. [13]

Mycosides are glycolipid compounds isolated from Mycobacterium that contain varying lipid, carbohydrate, and amino acid moieties. [14] Mycosides A and B have 18 and 20 carbon atoms, respectively. [15]

The genomes of some mycobacteria are quite large when compared to other bacteria. For instance, the genome of M. vulneris encodes 6,653 proteins, which is larger than that of small eukaryotes such as yeast (which encodes only ~6,000 proteins). [18] 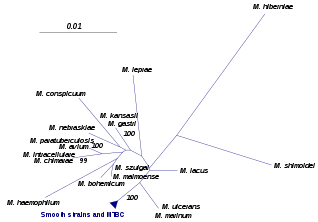 Phylogenetic position of the tubercle bacilli within the genus Mycobacterium:
The blue triangle corresponds to tubercle bacilli sequences that are identical or differing by a single nucleotide. The sequences of the genus Mycobacterium that matched most closely to those of M. tuberculosis were retrieved from the BIBI database ( http://pbil.univ-lyon.fr/bibi/[ permanent dead link]) and aligned with those obtained for 17 smooth and MTBC strains. The unrooted neighbor-joining tree is based on 1,325 aligned nucleotide positions of the 16S rRNA gene. The scale gives the pairwise distances after Jukes-Cantor correction. Bootstrap support values higher than 90% are indicated at the nodes.

Phenotypic tests can be used to identify and distinguish different mycobacteria species and strains. In older systems, mycobacteria are grouped based upon their appearance and rate of growth. However, these are symplesiomorphies, and more recent classification is based upon cladistics. Over 100 species are currently recognised.

O'Neill and coworkers recently presented a comprehensive phylogenetic analysis based on an alignment of core genomes of 57 strains of bacteria, including all available mycobacteria. [20]

Runyon's group I, II and III

Together they are known as the M. abscessus complex

Proposed division of the genus

Gupta et al. have, based on the analysis of 150 species in the genus, proposed dividing Mycobacterium into five genera. [21] The proposed new genera are:

This nomenclatural division of the genus Mycobacterium has been opposed on the basis that it unnecessarily complicates medical diagnoses and treatments. [22]

Mycobacteria can be infected by mycobacteriophages, bacterial viruses that may be used in the future to treat tuberculosis and related diseases by phage therapy. The procedure may not go into practice in the case of Mtb for some time, as bacteriophage particles cannot penetrate into the tuberculosis bacilli, or clumps.[ citation needed]

Mycobacteria can be grown by bacterial culture, but are slowly growing, and 6-8 weeks are generally required before concluding that there is no mycobacterial growth. [23]

In anatomic pathology specimens, immunohistochemistry and modifications of Ziehl–Neelsen staining (such as the Fite-Faraco method) have comparable diagnostic utility. Both of them are superior to traditional Ziehl–Neelsen stain. [24]