From Wikipedia
https://en.wikipedia.org/wiki/Mycelium
The vegetative part of a fungus 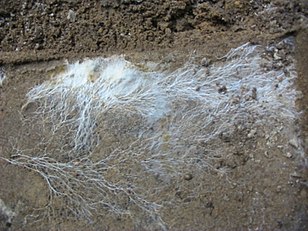 Mycelium is the vegetative part of a fungus or fungus-like bacterial colony, consisting of a mass of branching, thread-like hyphae. The mass of hyphae is sometimes called shiro, especially within the fairy ring fungi. Fungal colonies composed of mycelium are found in and on soil and many other substrates. A typical single spore germinates into a monokaryotic mycelium, which cannot reproduce sexually; when two compatible monokaryotic mycelia join and form a dikaryotic mycelium, that mycelium may form fruiting bodies such as mushrooms. A mycelium may be minute, forming a colony that is too small to see, or may grow to span thousands of acres as in Armillaria.

Through the mycelium, a fungus absorbs nutrients from its environment. It does this in a two-stage process. First, the hyphae secrete enzymes onto or into the food source, which break down biological polymers into smaller units such as monomers. These monomers are then absorbed into the mycelium by facilitated diffusion and active transport.

Mycelia are vital in terrestrial and aquatic ecosystems for their role in the decomposition of plant material. They contribute to the organic fraction of soil, and their growth releases carbon dioxide back into the atmosphere (see carbon cycle). Ectomycorrhizal extramatrical mycelium, as well as the mycelium of arbuscular mycorrhizal fungi, increase the efficiency of water and nutrient absorption of most plants and confers resistance to some plant pathogens. Mycelium is an important food source for many soil invertebrates. They are extremely vital to agriculture and are important to almost all species of plants many species co-evolving with the fungi. Mycelium is a primary factor is a plant's health, nutrient intake, and growth, with mycelium being a major factor to plant fitness.

"Mycelium", like "fungus", can be considered a mass noun, a word that can be either singular or plural. The term "mycelia", though, like "fungi", is often used as the preferred plural form.

Sclerotia are compact or hard masses of mycelium.

One of the primary roles of fungi in an ecosystem is to decompose organic compounds. Petroleum products and some pesticides (typical soil contaminants) are organic molecules (i.e., they are built on a carbon structure), and thereby show a potential carbon source for fungi. Hence, fungi have the potential to eradicate such pollutants from their environment unless the chemicals prove toxic to the fungus. This biological degradation is a process known as bioremediation.

Mycelial mats have been suggested (see Paul Stamets) as having potential as biological filters, removing chemicals and microorganisms from soil and water. The use of fungal mycelium to accomplish this has been termed mycofiltration.

Knowledge of the relationship between mycorrhizal fungi and plants suggests new ways to improve crop yields.

When spread on logging roads, mycelium can act as a binder, holding disturbed new soil in place preventing washouts until woody plants can establish roots.

Since 2007, a company called Ecovative Design has been developing alternatives to polystyrene and plastic packaging by growing mycelium in agricultural waste. The two ingredients are mixed together and placed into a mold for 3-5 days to grow into a durable material. Depending on the strain of mycelium used, they make many different varieties of the material including water absorbent, flame retardant, and dielectric. [1]

In 2013, another company ( MycoWorks) started producing mycelium furniture, mycelium bricks and mycelium leather. Bolt Threads is another company that uses mycelium to create a fake "leather", dubbed "Mylo", which has been incorporated into designs by Stella McCartney. [2]

Fungi are essential for converting biomass into compost, as they decompose feedstock components such as lignin, which many other composting microorganisms cannot. [3] Turning a backyard compost pile will commonly expose visible networks of mycelia that have formed on the decaying organic material within. Compost is an essential soil amendment and fertilizer for organic farming and gardening. Composting can divert a substantial fraction of municipal solid waste from landfills. [4]