Mpumalanga ( /əmˌpuːməˈlɑːŋɡə/) is a province of South Africa. The name means "east", or literally "the place where the sun rises" in the Swazi, Xhosa, Ndebele and Zulu languages. Mpumalanga lies in eastern South Africa, bordering Eswatini and Mozambique. It constitutes 6.5% of South Africa's land area. It shares borders with the South African provinces of Limpopo to the north, Gauteng to the west, the Free State to the southwest, and KwaZulu-Natal to the south. The capital is Mbombela. [4]

Before 1994, Mpumalanga was part of the now-defunct Transvaal Province. The province's name was Eastern Transvaal, from its initial establishment in 1994 until 24 August 1995. Prior to the establishment of the province, the term "Eastern Transvaal" was used to refer to the eastern part of Transvaal Province, or to the scenic tourist area around the Escarpment and Mpumalanga Lowveld bordering the Kruger National Park.

Mpumalanga has a rich archaeological heritage. Dotting the landscape are distinctive Bokoni stone-walled sites, built by a precolonial agropastoral society between ~1500 and 1820 A.D. [5] [6]

The Drakensberg escarpment divides Mpumalanga into a westerly half consisting mainly of high-altitude grassland called the Highveld and an eastern half situated in low-altitude subtropical Lowveld/ Bushveld, mostly savanna habitat. The southern half of the Kruger National Park is in the latter region. The Drakensberg exceeds heights of 2000 m in most places, with this central region of Mpumalanga being very mountainous. These regions have alpine grasslands and small pockets of Afromontane forest. The Lowveld is relatively flat with interspersed rocky outcrops. The Lebombo Mountains form a low range in the far east, on the border with Mozambique.

Some of the oldest rocks on earth have been found in the Barberton area; these ancient greenstones and metamorphosed granites form the Crocodile River Mountains in the southeast of the province. The Lowveld is underlaid by African Cratonic Basement rocks of ages in excess of 2 billion years. The Highveld is mostly Karoo Sequence sedimentary rock of a younger, Carboniferous to Permian age.

Mpumalanga is the only South African province to border two provinces of Mozambique ( Gaza Province to the northeast and Maputo Province to the east), as well as all four regions of Eswatini ( Lubombo, Hhohho, Manzini, and Shiselweni Districts).

The Lowveld is subtropical, due to its latitude and proximity to the warm Indian Ocean. The Highveld is comparatively much cooler, due to its altitude of 2300 m to 1700 m above sea level. The Drakensberg escarpment receives the most precipitation, with all other areas being moderately well-watered by mostly summer thunderstorms. The Highveld often experiences severe frost, while the Lowveld is mostly frost-free. Winter rainfall is rare, except for some drizzle on the escarpment. The differences in climate are demonstrated below by the capital, Mbombela, which is in the Lowveld, an hour from Belfast on the Highveld.

The diverse and special flora and fauna of the province enjoys protection in a range of nature reserves, including:

Many species of plants there are unique to the different geological formations within Mpumalanga. Some examples of these formations include serpentines of Barberton Mountains, norites of Sekhukhuneland, quartzites of Blyde River Canyon, and the dolomites in the northern plateaus. [8] 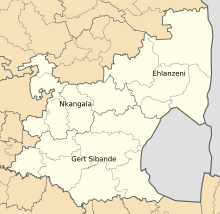 Forestry is extensive around Sabie in the far north east of the province. Located near the forests, Ngodwana is the site of one of South Africa's largest paper mills ( Sappi). [10]

Gold was first discovered in Mpumalanga province in 1883 by Auguste Roberts in the mountains surrounding what is now Barberton. Gold is still mined in the Barberton area today. [11]

Mpumalanga accounts for 83% of South Africa's coal production. 90% of South Africa's coal consumption is used for electricity generation and the synthetic fuel industry. Coal power stations are in proximity to the coal deposits. A coal liquefaction plant in Secunda ( Secunda CTL) is one of the country's two petroleum-from-coal extraction plants, which is operated by the synthetic fuel company Sasol. [12]

Mpumalanga is popular with tourists. Kruger National Park, established in 1898 for the protection of Lowveld wildlife, covering 20,000 square kilometres (7,700 sq mi), is a popular destination. [15] The other major tourist attractions include the Sudwala Caves and the Blyde River Canyon.

Many activities including the big jump, mountain and quad biking, horse trails, river rafting and big game viewing are endemic to the region. This is " Big Five" territory. Towns in the Lowveld are Barberton, Mbombela, White River, Sabie, Graskop, Hazyview, Malelane, Pilgrim's Rest, Lydenburg and Nkomazi. [16]

In 2008, a Haute Cuisine route was formed, trickling from Mbombela down to Hazyview. The Lowveld Gourmet Route covers the four top fine dining restaurants the area has to offer. The restaurants include Summerfields Kitchen, Oliver's Restaurant, Orange and Salt. [17]