The Mount Baker–Snoqualmie National Forest in Washington is a National Forest extending more than 140 miles (230 km) along the western slopes of the Cascade Range from the Canada–US border to the northern boundary of Mount Rainier National Park. Administered by the United States Forest Service, the forest is headquartered in Everett. [4] There are local ranger district offices in North Bend and Skykomish. [5]

The 1935 version of The Call of the Wild with Clark Gable, Loretta Young and Jack Oakie was filmed on location in Mount Baker National Forest because Twentieth Century Pictures felt it was remote enough to guarantee lack of interruption from skiers and other forest visitors. [7] Paramount Pictures later also filmed The Barrier at Mount Baker Lodge.

Together with the other central Puget Sound counties, 62% (3.63 million people) of the state's population lives within a 70-mile (110 km) drive of the forest. Another 1.5 million in the Vancouver metropolitan area are also within easy reach of the northern part of the forest. The large population factor, coupled with easy road access, makes the Mount Baker–Snoqualmie National Forest the most visited national forest in the country. [8] 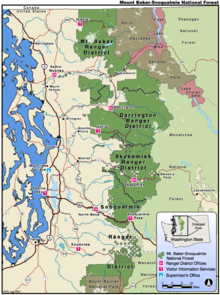 The number of glaciers in the forest has decreased from 295 in 1971 to fewer than 287 in 1998. [13] This is a part of the global phenomenon of glacier retreat. Forest glaciers have lost between 20 and 40% of their volume between 1984 and 2006. This is due to continued warm conditions and negative mass balance. [14] White Chuck Glacier (Glacier Peak) is no longer on the list of large glaciers, above. It shrank from 3.1 to 0.9 km2 (1.20 to 0.35 sq mi) from 1958 to 2002. With the shrinking of the glaciers, summer glacial runoff has been reduced by 65 to 80%. [15] This reduces streamflow and sediment and increases water temperature. Salmon and many other species are adversely affected by such changes. 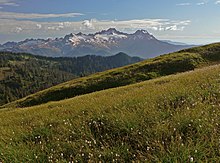 The north and east portions of the forest are exceptionally rugged and scenic. In 1968, part of the forest was transferred to the National Park Service to be within North Cascades National Park. A 1993 Forest Service study estimated that the extent of old growth in the forest was 643,500 acres (260,400 ha). [16] In addition, Congressional action since 1964 has established the following wilderness areas, which comprise 827,101 acres (3,347 km2)—almost half of the forest's area: [2]

These pristine areas provide clean water, solitude, and permanent protection to old-growth forests across 42% of the Mount Baker–Snoqualmie National Forest.

Congress also established the Skagit Wild and Scenic River System in 1978. Its 125 miles (201 km) of rivers on the Skagit, Cascade, Sauk, and Suiattle rivers provide important wildlife habitat and recreation. The Skagit River System is home to one of the largest winter populations of bald eagles in the United States.