From Wikipedia
https://en.wikipedia.org/wiki/Mola_(art_form)
For other uses, see Mola.

The Mola, or Molas, is a hand-made textile that forms part of the traditional women's clothing of the indigenous Guna people from Panamá, Central America, and Colombia, South America. The full costume includes a patterned wrapped skirt (saburet), a red and yellow headscarf (musue), arm and leg beads (wini), a gold nose ring (olasu) and earrings in addition to the mola blouse (dulemor). [1]

In Dulegaya, the Guna's native language, "mola" means "shirt" or "clothing". The mola originated with the tradition of Guna women painting their bodies with geometric designs, using available natural colors; in later years these same designs were woven in cotton, and later still, sewn using cloth bought from the European settlers of Panamá. [2]

Development of the style

A Guna woman displays a selection of molas for sale at her home in the San Blas Islands.

Molas have their origin in body painting. Only after colonization by the Spanish and contact with missionaries did the Guna start to transfer their traditional geometric designs on fabric, first by painting directly on the fabric and later by using the technique of reverse appliqué. It is not known for certain when this technique was first used. It seems to have originated in the second half of the nineteenth century. [3]

As an inspiration for their designs, the Guna first used the geometrical patterns which have been used for body painting before. In the past 50 years, they have also depicted realistic and abstract designs of flowers, sea animals and birds, and popular culture.

Depending on the tradition of each island, Guna women begin the crafting of molas either after they reach puberty, or at a much younger age. Women who prefer to dress in western style are in the minority as well as in the communities in Panama City.

Molas are hand-made using a reverse appliqué technique. Several layers (usually two to seven) of different-colored cloth (usually cotton) are sewn together; the design is then formed by cutting away parts of each layer. The edges of the layers are then turned under and sewn down. Often, the stitches are nearly invisible. This is achieved by using a thread the same color as the layer being sewn, sewing blind stitches, and sewing tiny stitches. The finest molas have extremely fine stitching, made using tiny needles.

This closeup of a mola by Venancio Restrepo shows the layering of the different colors of cloth, and the fine stitching involved.

The largest pattern is typically cut from the top layer, and progressively smaller patterns from each subsequent layer, thus revealing the colors beneath in successive layers. This basic scheme can be varied by cutting through multiple layers at once, hence varying the sequence of colours; some molas also incorporate patches of contrasting colours, included in the design at certain points to introduce additional variations of color. [4]

Molas vary greatly in quality, and the pricing to buyers varies accordingly. A greater number of layers is generally a sign of higher quality; two-layer molas are common, but examples with four or more layers will demand a better price. The quality of stitching is also a factor, with the stitching on the best molas being close to invisible. Although some molas rely on embroidery to some degree to enhance the design, those which are made using only the pure reverse-appliqué technique (or nearly so) are considered better.

Molas will often be found for sale with signs of use, such as stitch marks around the edges; such imperfections indicate that the mola was made for use, and not simply for sale to tourists. [1] A mola can take from two weeks to six months to make, depending on the complexity of the design. 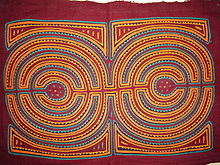 This traditional mola represents the olasu, a nose ring worn by the Guna women.

The traditional costume of a Guna woman consists of a patterned blue cotton wrapped skirt, red and yellow headscarf, arm and leg beads, gold nose rings and earrings and the many layered and finely sewn mola panel blouse.

The artistry of a mola reflects a synthesis of traditional Guna culture with the influences of the modern world. Mola art developed when Guna women had access to store bought yard goods. Mola designs are often inspired by modern graphics such as political posters, labels, pictures from books and TV cartoons, as well as traditional themes from Guna legends and culture.

Geometric molas are the most traditional, having developed from ancient body painting designs. Many hours of careful sewing are required to create a fine mola. The ability to make an outstanding mola is a source of status among Guna women.

The quality of a mola is determined by such factors as the number of layers, fineness of the stitching, evenness and width of cutouts, addition of details such as zigzag borders, lattice-work or embroidery, and general artistic merit of the design and color combination.

When Guna women tire of a particular blouse, they disassemble it and sell the molas to collectors. Since mola panels have been worn as part of the traditional dress of a Guna woman, they often show signs of wear such as fading and stitch marks along the edges of the panels. These "imperfections" indicate that the mola is authentic and not made solely to be sold to tourists.

Molas are often sold in pairs, the pair consisting of the back and front panels of a blouse. The two molas are usually two variations on a theme. Matched molas complement each other and should be displayed or used together for the greatest impact.

Mola panels have many uses. They can be framed as art or made into pillows, place mats or wall hangings. Some people even make them into bedspreads or incorporate them into quilting projects.

Molas are very sturdy and well sewn. Authentic molas have already been washed many times and can be safely hand washed in warm water.

Molas may be purchased in Panama or in Colombia.

In 1919, President Belisario Porras began a policy of forced assimilation banning mola's dress and nose piercing in women. The government introduced these laws to Westernize Guna society and assert control. [5]

There was a strong link between traditional dress and Guna culture and identity. Molas have such an importance for the Guna people and their traditional identity that they can be considered responsible for the independent status of the Comarca Kuna Yala.

After the attempt of the Panamanian government to "westernize" the Guna, the Guna greatly objected to the control on their cultural dress, and ethnic identity, and showed great strength in their reaction to the bans implemented by the government, leading to the Guna Revolution. [5]

In 1925 for three years following the revolution, women were required to once again adopt traditional dress as a form of rebellion against the government. Women on Nargana and other more progressive islands were forced to wear mola, even if they had never worn this traditional dress, and their noses had to be pierced by force. [5]