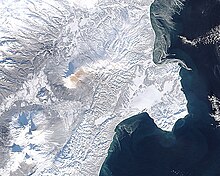 External view of the MODIS unit.

Exploded view of the MODIS subsystems.

This detailed, photo-like view of Earth is based largely on observations from MODIS.

The Moderate Resolution Imaging Spectroradiometer (MODIS) is a payload imaging sensor built by Santa Barbara Remote Sensing [1] that was launched into Earth orbit by NASA in 1999 on board the Terra ( EOS AM) satellite, and in 2002 on board the Aqua (EOS PM) satellite. The instruments capture data in 36 spectral bands ranging in wavelength from 0.4 μm to 14.4 μm and at varying spatial resolutions (2 bands at 250 m, 5 bands at 500 m and 29 bands at 1 km). Together the instruments image the entire Earth every 1 to 2 days. They are designed to provide measurements in large-scale global dynamics including changes in Earth's cloud cover, radiation budget and processes occurring in the oceans, on land, and in the lower atmosphere. MODIS utilizes four on-board calibrators in addition to the space view in order to provide in-flight calibration: solar diffuser (SD), solar diffuser stability monitor (SDSM), spectral radiometric calibration assembly (SRCA), and a v-groove black body. [2] MODIS has used the marine optical buoy for vicarious calibration. MODIS is succeeded by the VIIRS instrument on board the Suomi NPP satellite launched in 2011 and future Joint Polar Satellite System (JPSS) satellites.

The MODIS characterization support team (MCST) is dedicated to the production of high-quality MODIS calibrated product which is a precursor to every geophysical science product. A detailed description of the MCST mission statement and other details can be found at MCST Web. [3]

With its low spatial resolution but high temporal resolution, MODIS data are useful to track changes in the landscape over time. Examples of such applications are the monitoring of vegetation health by means of time-series analyses with vegetation indices, [4] long term land cover changes (e.g. to monitor deforestation rates), [5] [6] [7] [8] global snow cover trends, [9] [10] water inundation from pluvial, riverine, or sea level rise flooding in coastal areas, [11] change of water levels of major lakes such as the Aral Sea, [12] [13] and the detection and mapping of wildland fires in the United States. [14] The United States Forest Service's Remote Sensing Applications Center analyzes MODIS imagery on a continuous basis to provide information for the management and suppression of wildfires. [15]

The following MODIS Level 3 (L3) datasets are available from NASA, as processed by the Collection 5 software. [17]

Raw MODIS data stream can be received in real-time using a tracking antenna, due to the instrument's direct broadcast capability. [18]

Alternatively, the scientific data are made available to the public via several World Wide Web sites and FTP archives, such as:

Most of the data are available in the HDF-EOS format — a variant of Hierarchical Data Format prescribed for the data derived from Earth Observing System missions. [21]

Image based on observations from MODIS