From Wikipedia
https://en.wikipedia.org/wiki/Michael_Emerson
American actor
For the main protagonist of the film The Lost Boys, see Michael Emerson (character).

Michael Emerson (born September 7, 1954) is an American film and television actor who is best known for his roles as serial killer William Hinks on The Practice, Benjamin Linus on Lost, Zep Hindle in the first Saw film, Cayden James on Arrow, and Harold Finch on the CBS series Person of Interest. Emerson has also worked extensively in theater and narration. He has won two Primetime Emmy Awards and been nominated for three others, as well as receiving other awards and nominations. He currently stars as Dr. Leland Townsend in the CBS thriller series Evil.

Emerson was born in Cedar Rapids, [2] Iowa, to Carol (née Hansen) and Ronald H. Emerson. [3] He grew up in Toledo, Iowa, where he was a member of his high school marching band. [2]

He graduated in 1976 from Drake University in Des Moines, Iowa, where he majored in Theater [4] and minored in Art. [5] He studied a semester at the National Theater Institute at The Eugene O'Neill Theater Center,[ citation needed] then moved to New York City. Unable to find acting work, he took retail jobs and worked as an illustrator. [2] [5] [6] In 1986, he moved to Jacksonville, Florida, where (from 1986–93) he appeared in local productions at Theater Jacksonville and The Players by the Sea and worked as a director and teacher [5] at Flagler College. [7] After several years of differing kinds of work including illustration and teaching, [5] Emerson earned a Master of Fine Arts degree at the University of Alabama in the Alabama Shakespeare Festival acting program. [1]

Emerson landed a starring role in 1997 as Oscar Wilde in Moises Kaufman's critically acclaimed off-Broadway play Gross Indecency: The Three Trials of Oscar Wilde, and then followed up with several other notable stage performances. In 1998, he performed opposite Uma Thurman in an off-Broadway production of Le Misanthrope. In 1999, he played the role of Willie Oban in The Iceman Cometh. He co-starred with Kate Burton in both Give Me Your Answer, Do! and Hedda Gabler. [8] 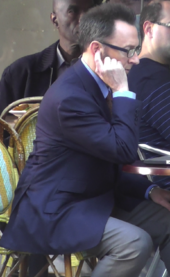 In September 2001, Emerson won an Emmy Award as "Outstanding Guest Actor in a Drama Series", for playing serial killer William Hinks in several episodes of The Practice. In 2006, Emerson began a guest-star role as Benjamin Linus on the serial drama television series Lost. [9] Emerson was originally set to appear in a small number of episodes, then returned for Season 3 as a main cast member and eventually became a main antagonist of the program. He received an Emmy Award nomination in the "Outstanding Supporting Actor" category in 2007 and 2008 for his work in the third and fourth seasons, respectively. He finally won the award in 2009 after being nominated for his role in the fifth season. [10]

Emerson was nominated in 2009 for a Golden Globe in the "Best Performance by an Actor in a Supporting Role" category. He was nominated for an Emmy for each season in which he was listed in the main cast. [11]

On July 31, 2010, Emerson and Preston read A.R. Gurney's Love Letters, which was a 1990 finalist for the Pulitzer Prize for Drama, at the Charleston Stage. They performed it as a fundraiser for the Stage, a South Carolina theatre. The reading was followed by a brief and intimate Question and Answer session. [12]

Emerson was set to reunite with former Lost cast member and friend Terry O'Quinn, in a comedy-drama tentatively titled Odd Jobs, by J. J. Abrams. It was expected to start filming by the end of 2010, but further development of the show has been postponed. Emerson joined the cast of another Abrams series, Person of Interest, that debuted in September 2011 on CBS. He played a billionaire who teams up with a supposedly dead CIA agent to fight crime in New York City. [13]

Emerson married actress Carrie Preston in 1998 in her hometown of Macon, Georgia. [14] They met while he was performing in a stage production of Hamlet in Alabama. [2] [6] It is his second marriage. [2] The two later starred together in Straight-Jacket (2004). Preston portrayed Emily Linus (the mother of Emerson's character) on Lost in the flashback sequences of the episode " The Man Behind the Curtain". [9] The two teamed up again, with Emerson portraying Preston's next-door neighbor, in the film Ready? OK! (2008). [15] Preston also appeared in several episodes of Person of Interest as Grace Hendricks (the former fiancée of Emerson's character).

Emerson supports charities connected to the theatre community, including the Actors Fund, Broadway Cares, and Off-Off Broadway, in addition to publicly supported radio stations and Habitat for Humanity. [5]