Mercutio ( /mərˈkjuːʃioʊ/ mər-KEW-shee-oh, [1] Italian: Mercuzio) is a fictional character in William Shakespeare's 1597 tragedy, Romeo and Juliet. He is a close friend to Romeo and a blood relative to Prince Escalus and Count Paris. As such, Mercutio is one of the named characters in the play with the ability to mingle around those of both houses. The invitation to Lord Capulet's party states that he has a brother named Valentine.

Though often fun-loving and witty, the latter demonstrated in his Queen Mab speech in the first act, Mercutio's sense of humour can at times be facetious or even coarse, much to his friends' annoyance. He is also moody and given to sudden outbursts of temper, one of which sets a key plot development in motion.

Role in the play

One of Romeo's closest friends, Mercutio, entreats Romeo to forget about his unrequited love for a girl named Rosaline and come with him to a masquerade ball at Lord Capulet's estate, through use of his Queen Mab speech. There, Mercutio and his friends become the life of the party, but Romeo steals away to Juliet, Capulet's daughter, with whom he has fallen in love, and he falls out of love with Rosaline. When Mercutio sees Romeo the next day, he is glad to see that his friend is his old self again, and he encourages Romeo, all the while making bawdy jokes at the expense of Juliet's Nurse.

After Romeo receives a death threat from Juliet's cousin Tybalt, Mercutio expects Romeo to engage Tybalt in a duel. However, Romeo refuses to fight Tybalt, because Romeo now considers Tybalt to be kin due to his secret marriage to Juliet. Mercutio is incensed at his friend's "calm, dishonorable, vile submission", and decides to fight Tybalt himself, right before which, Mercutio refers to his sword as his "fiddlestick." Romeo, not wanting his friend or his relative to get hurt, attempts to intervene. He fails, however, as Mercutio gets stabbed under Romeo's arm and dies. Before he dies, Mercutio curses both the Montagues and Capulets, crying several times, "A plague o' both your houses!" (Act III, Sc. 1, often quoted as "A pox on both your houses"). He makes one final pun before he dies: "Ask for me to-morrow, and you shall find me a grave man." A grief-stricken and enraged Romeo kills Tybalt, resulting in his banishment from Verona and beginning the tragic turn of events that make up the rest of the play.

The name Mercutio was present in Shakespeare's sources for Romeo and Juliet, though his character was not well developed and he was presented as a romantic rival for Juliet. [2] The name is first used in Luigi Da Porto's 1530 Giulietta e Romeo. Da Porto briefly introduces a character named Marcuccio Guertio, a noble youth "with very cold hands, in July as in January", who makes Giulietta Cappelletti appreciate the warm hands of Romeo Montecchi. [3] [4]

Earlier versions of the story described a different chain of events leading to Tybalt's death, omitting Mercutio completely. Arthur Brooke's The Tragical History of Romeus and Juliet and William Painter's 1567 versions of the story both left the entire episode solely to Romeo and Tybalt. In both stories, Tybalt attacks the pacifist Romeo with such force that Romeo is forced to take up the sword to defend himself. He is then banished rather than executed because the killing was provoked. In 1672, English poet John Dryden wrote, "Shakespeare show'd the best of his skill in his Mercutio, and he said himself, that he was forced to murder him in the third Act, to being killed by him." [5]

The addition of Mercutio into the fray increases the tension, and Tybalt is seen as a slightly more peaceful character than in previous versions, as Mercutio is disgusted by the fact that Tybalt continues to search for a quarrel with Romeo, when Romeo is trying to bring peace between them. Mercutio hurls insults and taunts at Tybalt, and draws the sword first, in reaction to Tybalt's insults, which are directed to Romeo.

Mercutio's death in Act III, scene I is the pivotal point of the play, which up to this point is relatively light-hearted. [6] Mercutio's death is sudden and makes death a dark reality for several characters, causing a domino effect of tragic fate that leads ultimately to the tragic climax.

A number of famous actors have played the role of Mercutio. A small sampling follows. 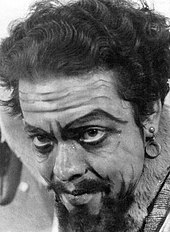