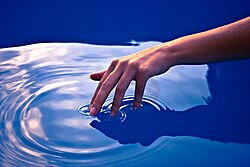 Ripple in water is a surface wave.

A mechanical wave is a wave that is an oscillation of matter, and therefore transfers energy through a medium. [1] While waves can move over long distances, the movement of the medium of transmission—the material—is limited. Therefore, the oscillating material does not move far from its initial equilibrium position. Mechanical waves transport energy. This energy propagates in the same direction as the wave. Any kind of wave (mechanical or electromagnetic) has a certain energy. Mechanical waves can be produced only in media which possess elasticity and inertia.

A mechanical wave requires an initial energy input. Once this initial energy is added, the wave travels through the medium until all its energy is transferred. In contrast, electromagnetic waves require no medium, but can still travel through one.

One important property of mechanical waves is that their amplitudes are measured in an unusual way, displacement divided by (reduced) wavelength. When this gets comparable to unity, significant nonlinear effects such as harmonic generation may occur, and, if large enough, may result in chaotic effects. For example, waves on the surface of a body of water break when this dimensionless amplitude exceeds 1, resulting in a foam on the surface and turbulent mixing.

Transverse wave is the form of wave in which particles of medium vibrates about their mean position perpendicular to the direction of the motion of the wave.

To see an example, move an end of a Slinky (whose other end is fixed) to the left-and-right of the Slinky, as opposed to to-and-fro. [2] Light also has properties of a transverse wave, although it is an electromagnetic wave. [3]

This type of wave travels along the surface or interface between two media. An example of a surface wave would be waves in a pool, or in an ocean, lake, or any other type of water body. There are two types of surface waves, namely Rayleigh waves and Love waves.

Rayleigh waves, also known as ground roll, are waves that travel as ripples with motion similar to those of waves on the surface of water. Such waves are much slower than body waves, at roughly 90% of the velocity of bulk waves[ clarify] for a typical homogeneous elastic medium. Rayleigh waves have energy losses only in two dimensions and are hence more destructive in earthquakes than conventional bulk waves, such as P-waves and S-waves, which lose energy in all three directions.

A Love wave is a surface wave having horizontal waves that are shear or transverse to the direction of propagation. They usually travel slightly faster than Rayleigh waves, at about 90% of the body wave velocity, and have the largest amplitude.