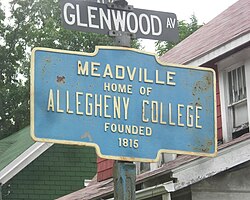 Meadville is a city in and the county seat of Crawford County, Pennsylvania, United States. [5] The city is within 40 miles (64 km) of Erie and within 90 miles (140 km) of Pittsburgh. It was the first permanent settlement in Northwestern Pennsylvania. The population was 13,388 at the 2010 census. [6] The city of Meadville is the principal city of the Meadville, PA Micropolitan Statistical Area. As well as one of two cities, the other being Erie, that make up the larger Erie-Meadville, PA Combined Statistical Area.

Meadville was settled on May 12, 1788, by a party of settlers led by David Mead. Its location was chosen well, for it lies at the confluence of Cussewago Creek and French Creek, and was only a day's travel by boat to the safety of Fort Franklin.

Their settlement was in a large meadow, first cleared by Native Americans led by Chief Custaloga, and well suited for growing maize. The village Custaloga built here was known as Cussewago. Custaloga's name first appeared in western Pennsylvania's history in George Washington's journal of 1754. [7] When Washington arrived in the village of Venango (Fort Machault), Custaloga was in charge of the wampum of his nation. This wampum was a message that was sent to the Six Nations if the French refused to leave the land. Custaloga was the chief of the Munsee or Wolf Clan of Delawares and he also ruled over the Delawares at the town of Cussewago, at the present site of Meadville. [8]

The neighboring Iroquois and Lenape befriended the isolated settlement, but their enemies, including the Wyandots, were not so amiable. The threat of their attacks caused the settlement to be evacuated for a time in 1791.

Around 1800, many of the settlers to the Meadville area came after receiving land bounties for service in the Revolutionary War. Meadville became an important transportation center after the construction of the French Creek Feeder Canal in 1837 and of the Beaver and Erie Canal it connected to at Conneaut Lake and subsequent railroad development.

In the late 18th and early 19th centuries, Meadville played a small part in the Underground Railroad helping escaping slaves to freedom. An event in September 1880 led to the end of segregation by race in the state's public schools. At the South Ward schools, Elias Allen tried unsuccessfully to enroll his two children. He appealed to the Crawford County Court of Common Pleas, and Judge Pearson Church declared unconstitutional the 1854 state law mandating separate schools for Negro children. This law was amended, effective July 4, 1881, to prohibit such segregation. [9]

By the late 19th century, Meadville's economy was also driven by logging, agriculture, and iron production. The Talon Corporation, headquartered in Meadville, played a major role in the development of the zipper. Since the clothing industry was largely unaffected by the Great Depression, the community saw a population boom at that time. During World War II, the nearby Keystone Ordnance plant brought additional jobs to the area. 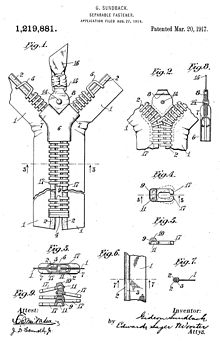 The high demand for zippers created favorable conditions for the Talon Company, and so became Meadville's most crucial industry. The company encountered significant difficulties after it was absorbed by Textron industries in 1968, eventually ending up bankrupt. Today, nothing remains of Talon in Meadville except for a few run-down buildings. However, as a result of the need for close tolerances and tool and die makers, a cottage industry of tool and die shops was established which resulted in Meadville, earning the city the nickname Tool City with more tool shops per capita than any place else in the United States.

In 1886, a blacksmith from Evansburg, Pennsylvania, George B. DeArment, began hand-forging farrier's tools and selling them from town to town out of the back of a wagon. The business eventually became known as the Champion Bolt and Clipper Company. In 1904, now named Channellock, the company moved to a 12,000-square-foot (1,100 m2) facility in Meadville and added nippers, pinchers, and open-end wrenches to its product line. George B. DeArment's two sons, Almon W. and J. Howard DeArment became partners in the company in 1911 and expanded the product line again to include hammers. In 1923, the company moved again to a 33,000-square-foot (3,100 m2) facility at its current location. Four years later, the name of the company was changed to the Champion–DeArment Tool Company.

Talon remained a major employer, along with the Erie Railroad, American Viscose Corporation (later known as Avtex Fibers), Channellock tools, and Dad's Pet Food. The area actually saw an increase in population during the Great Depression and the economy continued to grow past World War ll. [10] In the 1980s, the Great Lakes region saw a decline in heavy industry. By the early 1990s, Channellock and Dad's were the only large companies operating in Meadville. This blow to the local economy was softened by a subsequent surge in light industry, mainly tool and die machine shops. The area has seen growth in the 1990s and the first decade of the 21st century. The song "Bittersweet Motel" by Vermont jam band, Phish, was inspired when keyboardist Page McConnell left a wedding in Meadville and drove to the Pittsburgh Airport.

Originally built in 1843 by United States Supreme Court Justice Henry Baldwin. Just a few months after the house was complete, Henry Baldwin died in Philadelphia, Pennsylvania. After his death, the house became a girls’ school for three years until it was sold to a local businessman, William Reynolds. Thus, the house became The Baldwin-Reynolds House and now serves as a museum of history, the arts and cultural experiences in northwest Pennsylvania. The Baldwin-Reynold house offers free tours in the summer. [12]

A replica of founder David Mead's log cabin, the first permanent settlement in northwestern Pennsylvania, is located at Bicentennial Park along the banks of French Creek. The replica was built as a part of Meadville's Bicentennial celebration in 1988. The cabin is used as an educational resource for school tours and the general public. [13] 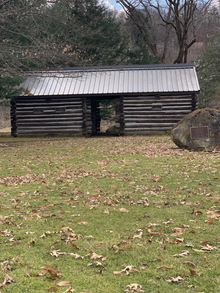 Diamond Park is Meadville's central park and has been used for a variety of different purposes for over two centuries. In the 19th century, the park was used as militia drill grounds leading up to and during the Civil War. After the Civil War was over, Diamond Park became more open to the public with grass, statues, monuments and a gazebo. It is now used as a recreational park for the community. [14] 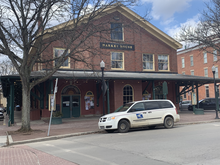 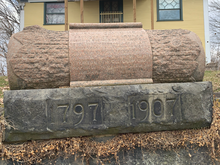 A monument in the shape of a scroll dedicated to the founder of Meadville, David Mead

The Market House is a prominent historical building located in downtown Meadville. It is the oldest continuously-run market structure in the state of Pennsylvania, and still serves as a hub for local farmers. Farmers markets are still held on Saturdays. [14]

Meadville is the home of Allegheny College, a liberal arts college with approximately 1,700 students. Allegheny was founded in April 1815 [15] by the Reverend Timothy Alden, a graduate of Harvard's School of Divinity. The college was historically affiliated with the United Methodist Church after 1833, although it is currently non-sectarian. The first class, consisting of four male students, began their studies on July 4, 1816, without any formal academic buildings. Within six years, Alden accumulated sufficient funds to begin building a campus. The first building erected, the library, was designed by Alden himself, and is a notable example of early American architecture. Bentley Hall is named in honor of Dr. William Bentley, who donated his private library to the College, a collection of considerable value and significance. In 1824, Thomas Jefferson wrote to Alden, expressing the hope that his University of Virginia could someday possess the richness of Allegheny's library. [16] Alden served as president of the college until 1831, when financial and enrollment difficulties forced his resignation. Ruter Hall was built in 1853. [17]

Meadville Theological School was established in 1844 by a wealthy businessman and Unitarian named Harm Jan Huidekoper. It moved to Chicago in 1926. [18]

Public schools, all part of the Crawford Central School District:

According to the United States Census Bureau, the city has a total area of 4.4 square miles (11 km2), all of it land.