From Wikipedia
https://en.wikipedia.org/wiki/Mathematics_of_paper_folding
Overview of the mathematics of paper folding

Map folding for a 2×2 grid of squares

The discipline of origami or paper folding has received a considerable amount of mathematical study. Fields of interest include a given paper model's flat-foldability (whether the model can be flattened without damaging it), and the use of paper folds to solve up-to cubic mathematical equations. [1]

In 1893, Indian civil servant T. Sundara Rao published Geometric Exercises in Paper Folding which used paper folding to demonstrate proofs of geometrical constructions. This work was inspired by the use of origami in the kindergarten system. Rao demonstrated an approximate trisection of angles and implied construction of a cube root was impossible. [2]

In 1936 Margharita P. Beloch showed that use of the ' Beloch fold', later used in the sixth of the Huzita–Hatori axioms, allowed the general cubic equation to be solved using origami. [1]

The Yoshizawa–Randlett system of instruction by diagram was introduced in 1961. [5] 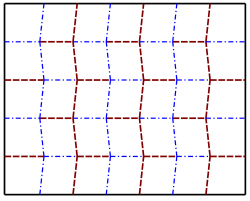 Crease pattern for a Miura fold. The parallelograms of this example have 84° and 96° angles.

In 1980 was reported a construction which enabled an angle to be trisected. Trisections are impossible under Euclidean rules. [6]

Also in 1980, Kōryō Miura and Masamori Sakamaki demonstrated a novel map-folding technique whereby the folds are made in a prescribed parallelogram pattern, which allows the map to be expandable without any right-angle folds in the conventional manner. Their pattern allows the fold lines to be interdependent, and hence the map can be unpacked in one motion by pulling on its opposite ends, and likewise folded by pushing the two ends together. No unduly complicated series of movements are required, and folded Miura-ori can be packed into a very compact shape. [7] In 1985 Miura reported a method of packaging and deployment of large membranes in outer space, [8] and as late as 2012 this technique had become standard operating procedure for orbital vehicles. [9] [10]

In 1986, Messer reported a construction by which one could double the cube, which is impossible with Euclidean constructions. [11]

The first complete statement of the seven axioms of origami by French folder and mathematician Jacques Justin was written in 1986, but were overlooked until the first six were rediscovered by Humiaki Huzita in 1989. [12] The first International Meeting of Origami Science and Technology (now known as the International Conference on Origami in Science, Math, and Education) was held in 1989 in Ferrara, Italy. At this meeting, a construction was given by Scimemi for the regular heptagon. [13]

Around 1990, Robert J. Lang and others first attempted to write computer code that would solve origami problems. [14]

In 1996, Marshall Bern and Barry Hayes showed to be an NP-complete problem the assignation of a crease pattern of mountain and valley folds in order to produce a flat origami structure starting from a flat sheet of paper. [15]

In 1999, a theorem due to Haga provided constructions used to divide the side of a square into rational fractions. [16] [17]

In 2001, among other more mathematical results Britney Gallivan folded first a bedsheet then a sheet of gold foil in half 12 times, contrary to the belief that paper of any size could be folded at most eight times. [18] [19]

In 2002, Belcastro and Hull brought to the theoretical origami the language of affine transformations, with an extension from

3 in only the case of single-vertex construction. [20]

In 2009, Alperin and Lang extended the theoretical origami to rational equations of arbitrary degree, with the concept of manifold creases. [24] [25] This work was a formal extension of Lang's unpublished 2004 demonstration of angle quintisection. [25] [26]

Angles around a vertex

The construction of origami models is sometimes shown as crease patterns. The major question about such crease patterns is whether a given crease pattern can be folded to a flat model, and if so, how to fold them; this is an NP-complete problem. [27] Related problems when the creases are orthogonal are called map folding problems. There are three mathematical rules for producing flat-foldable origami crease patterns: [28]

Paper exhibits zero Gaussian curvature at all points on its surface, and only folds naturally along lines of zero curvature. Curved surfaces that can't be flattened can be produced using a non-folded crease in the paper, as is easily done with wet paper or a fingernail.

Assigning a crease pattern mountain and valley folds in order to produce a flat model has been proven by Marshall Bern and Barry Hayes to be NP-complete. [15] Further references and technical results are discussed in Part II of Geometric Folding Algorithms. [29]

Some classical construction problems of geometry — namely trisecting an arbitrary angle or doubling the cube — are proven to be unsolvable using compass and straightedge, but can be solved using only a few paper folds. [30] Paper fold strips can be constructed to solve equations up to degree 4. The Huzita–Justin axioms or Huzita–Hatori axioms are an important contribution to this field of study. These describe what can be constructed using a sequence of creases with at most two point or line alignments at once. Complete methods for solving all equations up to degree 4 by applying methods satisfying these axioms are discussed in detail in Geometric Origami. [31]

As a result of origami study through the application of geometric principles, methods such as Haga's theorem have allowed paperfolders to accurately fold the side of a square into thirds, fifths, sevenths, and ninths. Other theorems and methods have allowed paperfolders to get other shapes from a square, such as equilateral triangles, pentagons, hexagons, and special rectangles such as the golden rectangle and the silver rectangle. Methods for folding most regular polygons up to and including the regular 19-gon have been developed. [31] A regular n-gon can be constructed by paper folding if and only if n is a product of distinct Pierpont primes, powers of two, and powers of three. 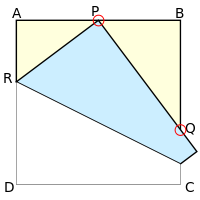 BQ is always rational if AP is.

The side of a square can be divided at an arbitrary rational fraction in a variety of ways. Haga's theorems say that a particular set of constructions can be used for such divisions. [16] [17] Surprisingly few folds are necessary to generate large odd fractions. For instance 1⁄5 can be generated with three folds; first halve a side, then use Haga's theorem twice to produce first 2⁄3 and then 1⁄5.

The function changing the length AP to QC is self inverse. Let x be AP then a number of other lengths are also rational functions of x. For example:

A generalization of Haga's theorems

Haga's theorems are generalized as follows: 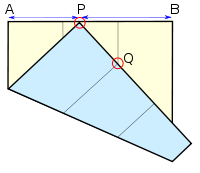 The classical problem of doubling the cube can be solved using origami. This construction is due to Peter Messer: [33] A square of paper is first creased into three equal strips as shown in the diagram. Then the bottom edge is positioned so the corner point P is on the top edge and the crease mark on the edge meets the other crease mark Q. The length PB will then be the cube root of 2 times the length of AP. [11] 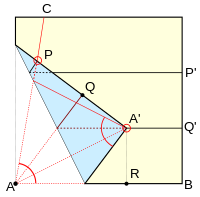 Angle trisection is another of the classical problems that cannot be solved using a compass and unmarked ruler but can be solved using origami. [34] This construction, which was reported in 1980, is due to Hisashi Abe. [33] [6] The angle CAB is trisected by making folds PP' and QQ' parallel to the base with QQ' halfway in between. Then point P is folded over to lie on line AC and at the same time point A is made to lie on line QQ' at A'. The angle A'AB is one third of the original angle CAB. This is because PAQ, A'AQ and A'AR are three congruent triangles. Aligning the two points on the two lines is another neusis construction as in the solution to doubling the cube. [35] [6]

The problem of rigid origami, treating the folds as hinges joining two flat, rigid surfaces, such as sheet metal, has great practical importance. For example, the Miura map fold is a rigid fold that has been used to deploy large solar panel arrays for space satellites.

The napkin folding problem is the problem of whether a square or rectangle of paper can be folded so the perimeter of the flat figure is greater than that of the original square.

The placement of a point on a curved fold in the pattern may require the solution of elliptic integrals. Curved origami allows the paper to form developable surfaces that are not flat. [36] Wet-folding origami is a technique evolved by Yoshizawa that allows curved folds to create an even greater range of shapes of higher order complexity.

The maximum number of times an incompressible material can be folded has been derived. With each fold a certain amount of paper is lost to potential folding. The loss function for folding paper in half in a single direction was given to be

, where L is the minimum length of the paper (or other material), t is the material's thickness, and n is the number of folds possible. [19] The distances L and t must be expressed in the same units, such as inches. This result was derived by Gallivan in 2001, who also folded a sheet of paper in half 12 times, contrary to the popular belief that paper of any size could be folded at most eight times. She also derived the equation for folding in alternate directions. [18]

A practical problem is how to fold a map so that it may be manipulated with minimal effort or movements. The Miura fold is a solution to the problem, and several others have been proposed. [37]